I never really knew my grandfather, he was:

Grandad was born on 2nd April 1887 at 62 Norman Street, Derby, the oldest son of Isaac and Kate (née Newland) Conway.

This site seeks to describe the Army service of Private 7632 Ernest John Conway, until the time of his final discharge from the Army in 1916.

The menu bar will take you to the different periods of his Army career, particularly the two great battles he was involved in, at Audregnies (24th August 1914) and Violaines (18th – 22nd October 1914) – where he nearly lost his life.

Grandad’s family both past and future, had many other members who served King, Queen and Country with a number of Regiments in many conflicts in different part of the World.  These also will be commemorated on this site.

the “About Grandad” page for these records.

Alternatively, you can explore the First Battalion’s War Diary and link to dedicated Cheshire Regiment pages where the Officers, NCOs and men who gave lives during the first five months, and beyond, of The Great War are commemorated.

My ultimate aim is have a dedicated page or section to each man who served alongside Grandad in the 1st Battalion and who gave his life in the Great War. These brave men need to be:

“More than Just a Name“ 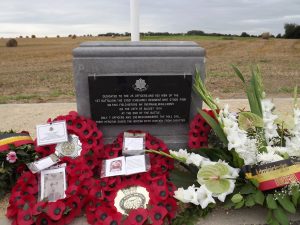 Wherever possible I have visited each Grave and Memorial where these brave men and comrades of my Grandad now lie.

You can see photos of their burial or commemorative site and read a little about their lives, so suddenly brought to a close.