Officers, N.C.O.s and Men of the 1st Battalion, Buried in Douai Communal Cemetery 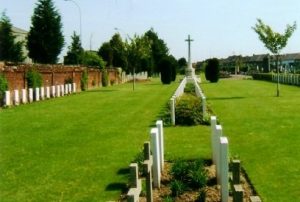 This cemetery contains 222 Great War burials, 197 from the UK, 14 Canadians, 7 from Australia, 3 New Zealanders and 1 South African. There are a 27 Second World War burials here too.

Douai was occupied by French troops and the Royal Naval Air Service on the 22nd September, 1914, and captured by the Germans on the 1st October.

It remained in enemy hands until the 17th October, 1918. Douai Communal Cemetery was used by the Germans for prisoners of war and British, French, Russian, Romanian and Italian soldiers, as well as German soldiers were buried in it.

Of the 222 named burials there are two Officers of the 1st Battalion, killed in 1914. Both of the men buried here died of wounds, one whilst a prisoner of war, although both died whilst in enemy hands after the 1st Battalion’s action at Violaines on 22nd October 1914.

Use the links below to read a little more about each of these brave Officers and see where he is buried within the Cemetery. 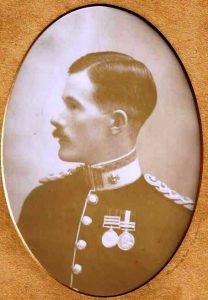 Lionel had an older sister, Enid Maud, two older brothers, John Gregory and Herbert Cyril (see below), and a younger sister, Dorothea. In addition he had 9 half brothers and sisters from his father first marriage to Elizabeth Jane (née Wall). Lionel’s father, William, died in 1883 and his mother, Maud, in 1893.

He married Edith Ione Stanes on 4th October 1905 at All Saints’ Church, Coonoor, Madras, India, whilst serving with the 2nd Battalion. They returned to Britain ib time for the birth of daughter Daireen Iona on 9th October 1909, at Westward Ho, Bideford, Devon. 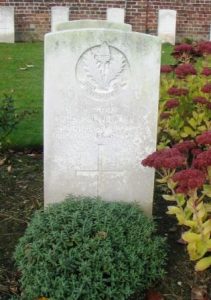 Military Service: Currently Lionel’s Army records are unavailable, and do not appear to have survived the Second World War bombing.

His ‘Roll of Honour‘ entry shows that he was gazetted 2nd Lieutenant, Cheshire Regiment, on 3rd August 1898 and promoted to Lieutenant on 23rd October 1899 and Captain on 15th October 1905.

His Medal Index Card and the War Diary show that he joined the Battalion on the 24th September at Le Mesnil from the Reserve of Officers.

Fusiliers, was Killed in Action on 25th May 1915. He  is commemorated on the Menin Gate, Ypres.

read more a more lengthy account of the life of Captain Lionel Archibald Forster and his family. [CLICK button] 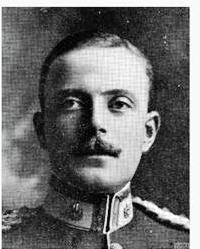 Personal: William was the son of William Morton Rich, of Mount Victoria, New South Wales, Australia. His mother was one of the 5 daughters of Australian politician, Sir Francis Bathurst Suttor (currently name unknown).

He was born in Geneva, Switzerland, on the 3rd August 1879, and educated at “The School,” Mount Victoria, New South Wales.

However, after his death it is apparent their were no obvious heirs, as in wife or children, as the following notice appeared in the London Gazette (Issue 28912 published 22 September 1914. Page 3):

“Captain WILLIAM SUTTOR RICH, Deceased.
Pursuant to the Statute 22 and 23 Victoria, c. 35.
ALL persons having any claims against the estate of William Suttor Rich, a Captain in the Cheshire Regiment, late of 115, Jermyn-street, London, W., and of the King’s West Africa Regiment, Sierra Leone, West Africa (who died on the 9th November, 1914, at Douai, France), are hereby required to send particulars, in writing, of such claims to the undersigned, on or before the 25th day ,of June, 1915, after which date the executor of the estate of the said deceased will proceed to distribute such estate, having regard only to the claims of which he shall then have said notice -Dated this 14th day of May, 1915.
BULL and BULL, 3, Stone-buildings, Lincoln’s Inn, London, Solicitors for the Executor, Sir William Bull, M.P.”

In February 1920 William’s War Gratuity of £45 [about £1775 equivalent today – 2020] was also paid to his Executor, Sir William Bull, M.P. for Hammersmith, underlining the lack of descendants. 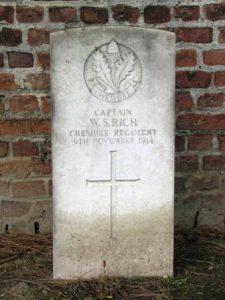 Military History: Currently his Army records are unavailable. From the above notice he seems to have originally been in the King’s West Africa Regiment.

In 1911 Lt. Col. P.L. Murray’s “Official Records of the Australian Military Contingents to the War in South Africa“, pp. 61 – 69, lists William as Private 392 in the 1st NSW Mounted Rifles serving during the Boer War in South Africa.

In May 1900 William was offered a Commission in the Cheshire Regiment. He served with the Cheshire Mounted Infantry in that War, during which he was wounded. He took part in many operations, earning him the QSA (5 clasps) and KSA (2 clasps).

From South Africa William was posted to India, stationed at Quetta, Balochistan, Pakistan, with the 1st Battalion, Cheshire Regiment, for 6 months. He was appointed Sectional Officer at Mount Abu, Punjab, and afterwards came to England with his Battalion.

Between 1905 – 1909 William was employed with the West African Frontier Force, and for a time was Commandant at Katsena, Northern Nigeria, and later served at Sierra Leone.

His career after that is not known except that London Gazette Issue 28912 published on the 22 September 1914. Page 7573 states: “The Cheshire Regiment, Supernumerary Captain William S. Rich is restored to the establishment. Dated 14th September, 1914“, so presumably he was at that time not a serving Officer.

During the Battle of Le Cateau the depleted 1st Battalion were in reserve, however, Captain Rich, with a Subaltern, a Sergeant, and seven men, held a shallow trench on the left; and with another small party posted on a ridge to the right and succeeded in holding up some hundreds of the enemy, and so secured the retirement of the troops, who passed between the parties. It was for this fine piece of work that Captain Rich was first Mentioned in Despatches.

The enemy launched a huge offensive on the 20th October. It reached from Arras to the sea and it included a heavy assault upon the 1st Battalion at Violaines. William received a wound in the jaw on the 20th October. Although it prevented him from eating he was still as cheerful as ever, and the life and soul of his battalion.

Two days later, while acting as Second in Command of his battalion and defending his trenches at Violaines, near La Bassée, he received his fatal wound during a sudden onslaught by the enemy. Captain Rich was listed as a ‘wounded‘ in the War Diary on 22nd October. With several other wounded officers he was taken prisoner, and removed to a hospital at Namur, and later to the Military Hospital, 4th Army Corps, Douai, France, where he died on 8th December.

He was twice Mentioned in Despatches, for his gallantry in Sir John French’s Despatches of the 8th October 1914, and of the 14th January 1915, where he appears as “Rich, Captain W. S. (died of wounds received in action)“.

read more a more lengthy account of the life of Captain William Suttor Rich and his family. [CLICK button]