Alec has not been found on the 1911 Census. Brother Lionel is shown in the 1911 Census (RG 14/5621) as a serving Lieutenant on board HMS Fisgard. He had enrolled in the Royal Navy on 15th January 1895, aged 15. Charles was at Ardingley School as a Boarder. The parents and Guy and Roy were living at 23 Philbeach Gardens, Kensington. Guy is recorded as “Royal Navy – Retained“. 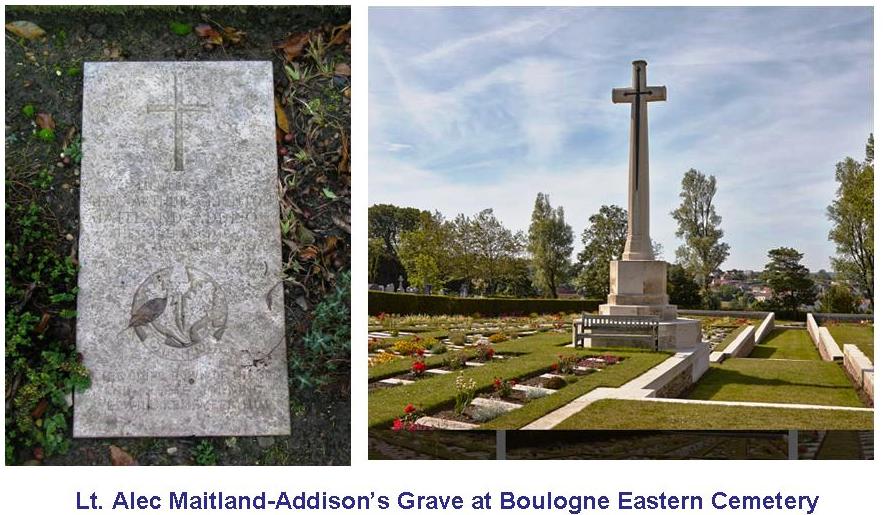 Military Service:  Currently his Army records are unavailable, and do not appear to have survived the Second World War bombing, neither is his Medal Index Card available. Alec was gazetted 2nd Lieutenant in the Cheshire Regiment on 16th September 1914 and promoted Lieutenant for “distinguished service in the field“. (Source: ‘Roll of Honour’.)

He died in Hospital at Boulogne on 27th October from “wounds received at on the 25th“. (According to his “Roll of Honour” entry this was at Ypres, but the Battalion did not get there until 6th November, on the 25th October the Battalion was in reserve east of Bethune.)

Crookenden, page 28, gives the date of Lieutenant Addison being wounded as the 20th, on which date the Battalion was in action at Violaines. The War Diary confirms this: “Held VIOLAINES, artillery shelled LA BASSEE. Battalion on outposts. 2/Lieut MAY, 2/Lieut ADDISON wounded, 3 men killed, 24 men wounded. 3 p.m. German attack repulsed. Battalion on outposts.”

Alec died of his wounds, a week later, on the 27th, and was buried in Grave I.B.5., Boulogne Eastern Cemetery. The inscription on his headstone reads: “At the going down of the sun and in the morning we will remember him“.

Lieutenant Maitland-Addison’s military service and where he is buried.

In addition to Alec Arthur Crichton, 1st Cheshire Regiment, all of his six brothers had distinguished service in H.M. Forces, two paying the Supreme Sacrifice. Read their stories below:

The 1911 Census shows John is serving with the Royal Artillery, but living at home at 74 West Cromwell Road, S W London. He had been promoted to “2/Lieutenant” on 26th February 1898 and to “Lieutenant” on on 1st February 1901.

Lieutenant Clive Charles Henry Maitland-Addison (R.N.) was born on 15th October 1879 in Brighton, Sussex. He enlisted in the Royal Navy on 15th January 1894, and passed out of the training ship HMS Brittania in mid-January 1896.

Clive served one year in HMS Resolution in the Channel Squadron before being sent to spend two years in HMS Centurion on the China Station. He spent much of 1899 in HMS Champion and HMS Minerva.

He was promoted to the rank of Lieutenant on 31st December 1901. Clive served in HMS Sutlej from May 1902 until 27th November 1903 before joining HMS Berwick in the Cruiser Squadron from 9th December 1903 until 13th March 1906, when he was appointed as first officer in the scout cruiser HMS Attentive.

On 14th April 1909 while in his first command appointment in T.B.17., Clive was taken ill and was sent to Chatham Hospital. He was discharged on 4th May and returned to the torpedo boat. After leaving the ship in October 1909, he held command of a series of destroyers, ending with command of HMS Boyne, which ended on 15th August 1911. He was appointed in command of the gunboat HMS Kinsha on the China Station, but died of pneumonia and heart failure aged just thirty-two years, on 26th October 1911.

After T.B. 56 capsized and was lost while under tow near Damietta, Eqypt, on 18th May 1906, Lionel lost twelve month’s seniority and was severely reprimanded and dismissed the ship in the ensuing Court Martial.

After it appears he was thought to have deserted in 1911, he re-appeared and was placed on the Retired List on 22nd February 1912, however, Lionel was promoted to the rank of Lieutenant-Commander on 30th June 1912.

The 1911 Census shows Lionel still on Active Service (“Lieutenant [Executive]“) and serving with the Royal Marines on HMS Fisgard, a shore establishment at Gosport, Hampshire.

Lionel died on 14th April 1940 in Hammersmith, London, aged 59. No record can be found of him marrying.

Guy enrolled in the Royal Marines on 1st September 1902, and in 1905 he was serving as a Lieutenant (R.M.L.I.) on H.M.S. Cumberland, a twin screw armoured Cruiser.

Guy’s Medal Index Card shows that on his re-enlistment he joined as Corporal 4508, 18th London Regiment.

the History of the 1/18th London Regiment in the Great War.

Rifleman 323473 Roy Crichton Alfred Maitland-Addison was born in Brighton, Sussex, the 3rd quarter 1889. The 1901 Census (RG 13/1191) shows the family living at 41 Hamilton Road, Ealing, Middlesex. (The family are only recorded by initials, with 5 children in total.)

Unlike his older brothers, Roy did not enlist early in the Military and the 1911 Census (RG 14/133) shows him still in the family home at 23 Philbeach Gardens, London S W, working in the “Stock Exchange“.

Roy enlisted  with 1/6th Battalion, London Regiment (City of London Rifles) and entered France on Christmas Day 1916. He died of wounds on 1st May 1917. He is buried in Grave XII. A. 27A., Lijssenthoek Military Cemetery.

2nd Lieutenant Charles Bissett Maitland-Addison, the youngest son of the family, was born in the 2nd quarter 1896 at Portsea Island, Hampshire. The 1901 Census (RG 13/1191) shows the family, and 5 year old Charles, living at 41 Hamilton Road, Ealing, Middlesex. The 1911 Census (RG 14/5019) shows him as a student at St Saviour’s College, Ardingly, Haywards Heath, Hampshire.

This entry was posted in Boulogne Eastern Cemetery and tagged Died of wounds. Bookmark the permalink.