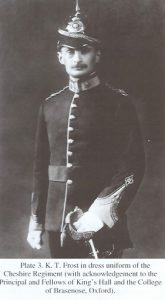 Personal: Lieutenant Frost was born on the 12th March 1877 at Tamar Terrace, Launceston, Cornwall. His father was Denis Tregosse Frost (Solicitor) and his mother was Sophia Margaret Frost, formerly Messenger.

He worked in Egypt from 1904 to 1905 with Professor Sir Flinders Petrie. The Royal Geographical Society made him a Fellow in 1905. 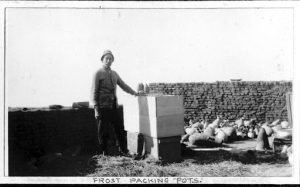 From 1909 up to his death, Kingdon was a Lecturer on Archaeology and Ancient History at Queens University, Belfast. Kingdon also formed part of the excavation team at Haraga just before World War 1.

It is possible he took a handful of objects from the site, as at least three vessels known to be from Haraga are now in Worcester Museum, donated by the Worcester Girls Grammar School (Now Worcester Sixth Form College) by a Miss D. M. Frost.

Kingdon was also interested in the myth (or otherwise) of Atlantis. On 2nd December 1909 he published an article identifying Minoan Crete as the Atlantis of Plato, becoming the first person to make the case.  This article ran in the “Journal of Hellenic Studies​“. 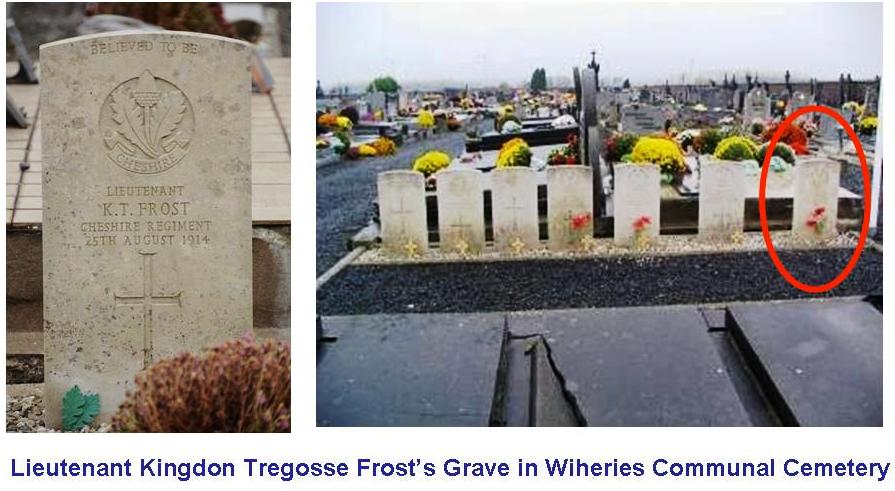 Military Service: Kingdon was a Lecturer on Archaeology and Ancient History at Queens University, Belfast, and a member of the Queen’s O.T.C (2) unit of which he was a keen and much valued member.

In September 1912 he was gazetted to the 3rd (Special) Reserve Battalion, The Cheshire Regiment (London Gazette, 3rd September 1912, p. 6539), and was commissioned a Lieutenant in the same unit on the 29th June 1913. When the Great War broke out he was recalled as a Reserve Officer with the 1st Battalion.

His Medal Index Card shows he entered France with the 1st Battalion on 16th August 1914 and his date of death recorded as 4th September 1914.

Research shows that there is no doubt he was killed in action on 24th August (CWGC records show 25th, but there seems little logic for this. (It had previously given his date of death as 4th September 1914, but there is even less evidence for this.)

Kingdon was Attached to ‘C’ Company, under Captain W.E.L.R. Dugmore and fought on the right of the line during the Action at Audregnies. He was killed in action that day. Second-in-Command was Captain E.A. Jackson who was taken prisoner and spent the rest of the War in various p-o-w camps in Germany.

Crookenden has this to say about Lt. Frost’s death: ‘This platoon (9 platoon ‘C’ Company under the command of Sgt. Raynor) received Dugmore’s order to retire, but, on reaching the sunken road Raynor (and his corporal) were seized with misgivings, about the authenticity of the order. They did not therefore retire further but lined the bank on the roadside and opened fire on the enemy advancing in front and on their right.

The shortage of ammunition, now acute, was causing the NCOs considerable anxiety and a further withdrawal seemed indicated. Just as the platoon was about to move off, some troops were seen to their right rear moving southwards. Lt. Frost, an officer of the Special Reserve who was attached to the platoon, volunteered to go and identify them. He did not return. He was seen later by a wounded officer of the 4 Dragoon Guards “fighting like a demon, having refused to surrender.”. Although wounded several times, he refused to give in and death alone overcame his indomitable spirit.‘

This stage of the Battle in an article written by 10066 Cpl. W. Crookes (“C” Coy),published in the Regimental Magazine, “The Oak Leaf”.

Lieutenant Kingdon Tregosse Frost’s grave was unknown for nearly 80 years until Alan Gregson deduced he was buried in Wiheries Graveyard. He then presented his evidence to the CWGC and persuaded them to recognise Lt Frost’s resting place.

After failing to answer Roll Call after the Battle at Audregnies, Kingdon was reported missing and subsequently presumed dead. For some unknown reason the CWGC had recorded his death as 4th September 1914.

His name was, therefore, included in those of the 1st Battalion “Known Unto God” and engraved on La Ferte-sous-Jouarre Memorial to the Missing.

By a process of elimination Mr Gregson was able to show that the CWGC headstone carrying the words ‘UNKNOWN OFFICER 1914‘ in Wiheries Cemetery, was that of Lieutenant Frost. 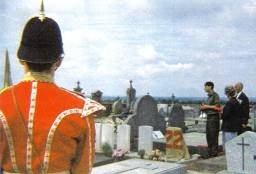 On the 24th August 1994, exactly 80 years later on from the anniversary of his death, the new headstone was in place on Lieutenant’s Frosts and was unveiled to the members of the Cheshire Regiment Association by Brigadier M.D.K. Dauncey, DSO, DL. an Officer of the 1st Battalion.

[I am grateful to Alan Gregson for the photo left] 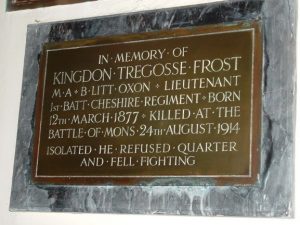 Lieutenant Frost’s family had placed the memorial to him in the Parish Church of St. Peter, St. Paul and St. Thomas, Bovey Tracey, Devon. The following words appear on it:

During research for this site one of the men buried in an ‘Unknown’ Grave in the same Cemetery has been identified.

This entry was posted in Wiheries Communal Cemetery. Bookmark the permalink.