My paternal Grandad, ERNEST JOHN CONWAY, was born on 2nd April 1887 at 62 Norman Street, Derby, the oldest son of Isaac and Kate (née Newland) Conway. When he died, aged 61, in the City Hospital, Derby, on 14th January 1949, I was only 19 months old, but I like to think he still had time to meet his grandson.

At the time of my grandad’s birth his father, Isaac, was 19 years old, having been born on a barge at the Lion Wharf, The Hill, Halesowen, Worcestershire, on 12th September 1867. 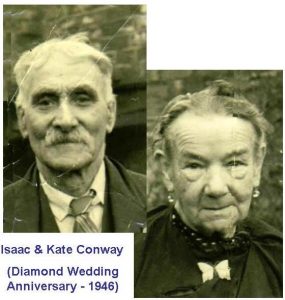 As his birth certificate (right) shows, at the time of Grandad’s birth his father, Isaac, was employed as a foundry worker – an occupation that was to persist for the next three generations of the Conway family, with sons, grandsons and nephews similarly employed. 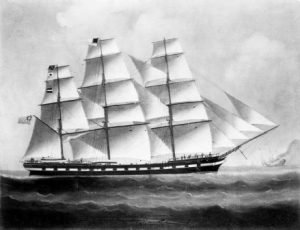 John Newland and his wife, Mary Ann, were in transit from Poona, India, to Portsmouth. Kate was born part way into the voyage which left India on 16th December 1865, arriving in Portsmouth on 7th April 1866. She was their only child.

Kate was baptised in the Garrison Chapel, Portsmouth, the following day.

Despite being nearly 50 years old, on 30th April 1915 Isaac enlisted in the Royal Engineers and served as Lance Corporal 97344 Isaac Conway, No. 6, Depot Company. He was invalided out on 14th June 1916 and returned to work as a “Riveter” with the Midland Railway.

In later life Isaac and Kate  Conway became local ‘celebrities’. Both lived into their 90s and just failed by a few months to celebrate their 70th Wedding Anniversary. 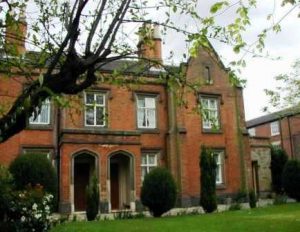 Strangely, whilst I never knew Grandad and Grandma Conway, I did know my Great-Grandparents, Isaac and Kate, often visiting them at No. 8, Alms Houses, London Road (picture right), where they lived after leaving 14 John Street, Derby. They had lived at John Street since at least 1916 when Isaac returned from his Great War Service.

With such a large family their little Alms House was never short of visitors, especially on a Sunday morning.

I was taken to see my great-grandparents many times, often after a morning fishing with my dad or a swimming lesson. The ‘holiday-snap’ (left) shows Isaac and Kate in the early ’50s on the beach at Skegness, Lincolnshire, with grandchildren and great-children. 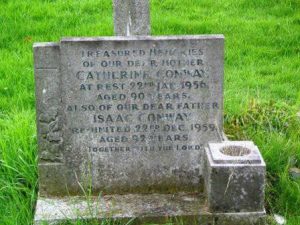 Kate died 3 weeks after her 90th birthday, on 22nd January 1956, aged 90, in the Manor Hospital, Derby. Isaac remained in the Alms House until shortly before his death in the Arthur Neal Home, Derby, on 22nd December 1959, aged 92.

They are buried together in Grave 60925, Nottingham Road Cemetery, Derby. 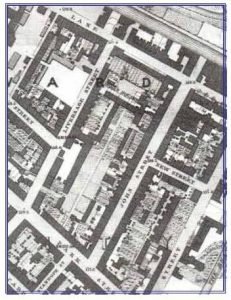 By 1901, according to the Census (below), 14 year old Ernest John was living with his parents, brothers and sisters at 22 John Street, Derby.

His father, Isaac, was employed as a “Striker” (categorised by the Enumerator as a “Blacksmith“. Possibly he worked at the Engineering Works shown at the end of the street on the map – left – next to the Derby Canal, but more importantly very near the Railway Works. [CLICK Map to enlarge]

At the age of 18 years 3 months he joined the Cheshire Regiment, possibly like many from similar backgrounds, to escape from an ever overcrowded house. He signed on at the Normanton Barracks, Derby,  on the 11th July 1904.

His period of service was 12 years and on his Attestation Papers it states that 3 of these years would be in active service and the remainder in the Army Reserve. Most of Grandad’s Military Service was served in India and he was discharged to the Reserve on 10th July 1907. Almost exactly a year later he married my Grandmother.

Emma was the 2nd of 8 children of James and Mary (née Cummings) Piggott. James worked most of his life as an Engineer Fitter, at Midland Railway, Carriage & Wagon Works. He died in 1943, 11 years after his wife, Mary.

3. Ernest  – (my dad) born 20th May 1913 and died 15th October 1997. Tried 3 times to join Royal Navy in 1939, but was in sent home as was employed in an “Essential Occupation“, building Spitfire engines at Qualcast Ltd. Derby, so served for 6 years in the Auxiliary Fire Service.

In total the three surviving brothers, who all spent their working lives in heavy industry and grew up in virtual poverty, amassed a total of 265 years of life!

By the time of the 1911 Census (below), Grandad and Grandma, with their new-born son, Albert, are found living at 145 Siddalls Road, Derby – with the in-laws!  The house is the home of James Piggott, Emma’s father, and although the Census return states the house had 6 rooms, Siddalls Road was not renowned for having large houses! Grandad was employed as a “Crane Driver” at the “Midland Railway Works“.

In addition to the Conway family, James and Mary Piggott still had 6 children of their own living at home. [CLICK on image below to see the full Census Return.]

Two years after this Census was taken, on 20th May 1913, my father, Ernest Conway, was born into the family. They had by then moved to 3 Dexter Cottages, Liversage Street, Derby. Grandad was still employed by the Midland Railway as a Crane Driver.

Throughout all this time, from leaving the Army in 1907 right up to the declaration of War in August 1914, Grandad was still on the Army Reserve List. His 12 years would not expire until July 1916, so once War was declared he was immediately recalled to his Regiment. Once a year he attended a week long training camp, where his skills were upgraded. 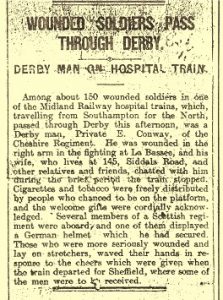 I knew little about Grandad’s Great War service until about 25 years ago.  My dad had told me he had been in the Cheshire Regiment and also he had “..been on the first boat out and the first boat back! ..”  This I learned from a yellowing newspaper cutting (right), found among my dad’s photos, was because he had been wounded at La Bassée. [CLICK to enlarge]

Having been wounded in action Grandad was awarded the ‘Silver War Badge‘ [No. 10597].

Among other things, when worn, it indicated to the public he had ‘done his bit‘ and was not a shirker.

After some searching at the Derby Local Studies Library, I found that the cutting had been originally printed in the “Derby Daily Express” on Friday, 23rd October 1914.  So maybe it was not quite the “first boat back“, but it was certainly not long into the War. 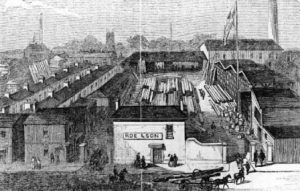 There was some attempt to send Grandad back to France in 1915, in preparation for the 1916 Somme Offensive, but he was not fit and was finally discharged from the Army on 29th March 1916. By the time Uncle Cyril was born on 18th January 1917, the family had moved to 2 Roe’s Cottages, Court 5, Siddals Road, Derby – a dirt floored, 2-up-2-down cottage in a wood yard. 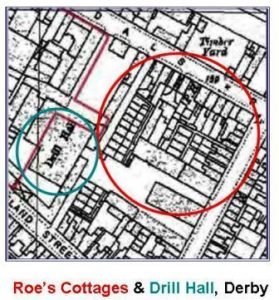 Dad’s description of where he grew up left visions of flowers round the door! What else could “ROSE Cottage” mean ?

The 1913 O.S. Map (right) also shows how close Grandad was to the Derby Drill Hall, where he was ordered to report on 4th August 1914.

Despite having a wife, a job, and two young children at home, 10 days later he was sailing for France. 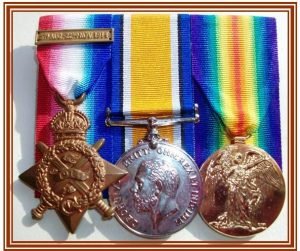 In my parents’ house, growing up, I used to play with Grandad’s medals.  These were kept in an old tin box. Of course, later I realised the significance of my childhood playthings. Grandad’s medals were “Pip, Squeak and Wilfred” or, more properly, the 1914 Star (popularly known as the “Mons Star“), with its bar to show he served under fire; the British War Medal and the Victory Medal.

The old box was Princess Mary’s Gift to the troops, Christmas 1914 and even though Grandad was back in Britain by then, he would have qualified to receive his gift as a “Class C: all troops in the British Isles” recipient. 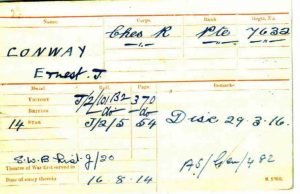 Grandad’s ‘Medal Index Card‘ (left) shows the dates of his Service in the Great War.

The date he entered France was 16th August, thereby qualifying him to receive the ‘Mons Star‘, having been in action up to 22nd November 1914. It also shows that he was “Disc“(harged) on 29th March 1916.

The 1914 Clasp on his Star is shown in the picture above. On his Medal Bar the Clasp is signified with a ‘Rosette‘ – hence the award is often referred to as “With Clasps and Roses‘.

When the War was over and having been wounded in action, Grandad applied for a Pension for his wife and children.

The collection of Pension Records Cards, formerly held by the Ministry of Defence, was taken on by The Western Front Association in November 2011 to ensure that it would be preserved as an important First World War archive.

When my dad, Ernest Conway, married Doris Hendley, on 25th July 1936, Grandad and Grandma were still living at 145 Siddals Road, but by the time of the “1939 England and Wales Register“, with all the family gone, they had moved 128 Abbey Street, Derby. 52 year old Grandad was still working as a Crane Driver, in an “Iron Foundry“.

As well as Grandad, to whom this website is dedicated, many more of his extended family had significant Military Service. They too will be remembered on this site.

CLICK the links below to see how other members of the extended “Conway Family” served their Queen, Kings and Country.

All branches of the extended family served in many conflicts as part of H.M. Forces.