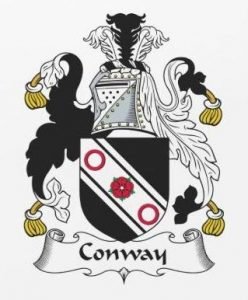 At least six of Grandad’s immediate family served in the Great War and World War 2. His grandfather (John Newland) and great-grandfather (John Ashmole), both on his mother’s side, had long military careers, mostly in India.

Research is still going on, but now (2020) the following family members, bearing the Conway name, have served their country in times of War:

Perhaps the most surprising to find was Grandad’s father, Isaac, who enlisted in No. 6, Depot Company, Royal Engineers, on 30th April 1915, when aged almost 48 years old.

He enlisted at Birmingham, and after 4 months training at Warminster he was posted the Royal Engineers training centre at Deganwy, North Wales, opened in 1915 to “… help the flow of new recruits into the New Army units.”

His Service Papers show he arrived there on 29th September 1915. Maybe Isaac’s experience in civilian life as a Crane Driver with the Midland Railway Company was considered a valuable training skill in the Royal Engineers.

Army life proved too arduous, however, and on 12th June 1916 a travelling Medical Board recommended Isaac’s discharge as unfit due to “Emphysema” and a “Heart Condition“.

He was discharged 2 weeks later on 26th June 1916 and received a small pension for 6 months. Even so great-grandad served 1 year and 58 days with the Colours.

Despite his health problems, my Great-Grandfather, Isaac Conway, lived another 43 years before his death in the Manor Hospital, Derby, on 22nd December 1959, aged 92.

about Isaac and Kate Conway on the “About Grandad” page

When Edward enlisted in the Royal Navy on 25th September 1915 for 12 years (5 on Active Service, followed by 7 on the Reserve) he was only just 14 years old, but “exaggerated” his age by one year!

Exactly 3 years later he was posted to HMS Pembroke and was transferred on 15th February 1919 to HMS Dragon, D.46 (right), serving as a ‘Fireman/Stoker‘.

HMS Dragon was a ‘D’ Class Destroyer of the Royal Navy, newly built and the fastest in the fleet.

HMS Dragon took part in the Russian Civil War as part of a task force aiding independent Latvia and Estonia against the Bolsheviks and German Freikorps forces in October and November 1919. On 17th October 1919 Dragon was hit by three shells fired from a shore battery while taking part in operations against German forces attacking Riga, suffering nine killed and five wounded. During the D-Day landings she was scuttled on the Normandy beaches to aid the Allied landings.

In April 1920 Edward emigrated to Toronto, Canada, where he married Mary Ellen Harris (who he met on the boat) on 20th July 1920. Edward also served in World War 2 with the Canadian Army.

After the War great-uncle Ted returned to his wife and 6 children in Toronto where he died on 2nd March 1989.

Uncle Albert was born in Derby 2nd April 1910, but as a youth left home to join the 2nd Battalion, Cheshire Regiment (his father’s Regiment) on or about 18th March 1925.

During his service he married Ellen Roberts in 1931. They had one daughter.

After his discharge on 7th March 1936 Albert was transferred to the Army Reserve, and just as his father had done in 1914, was recalled to the Colours on the declaration of War in 1939. 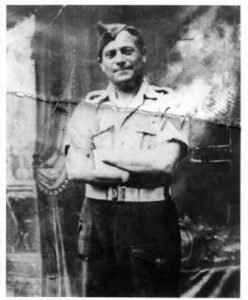 The photo of Uncle Albert – left – was taken in Rome in 1944 as the Cheshires fought their way up Italy after landing at Salerno. After the War his Battalion was sent to Palestine.

Uncle Albert’s extensive Service is reflected in his campaign medals shown right, including the Palestine General Service Medal on the right.

After the War Uncle Albert returned to Chester and worked in the steel works. He died on 17th January 2002. 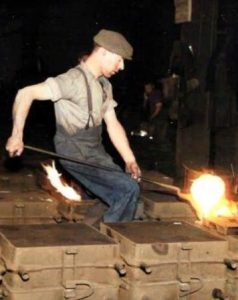 When the Second World War was declared in September 1939, my father, Ernest Conway, had tried to enlist in the Royal Navy. However, he was rejected as he was in a “Tied Occupation“, i.e his work as a “Moulder” in an Iron Foundry (Qualcast Ltd., Derby) was deemed so important as to prevent his enlistment.

Unable to enlist full-time, Ernest joined the “Auxilliary Fire Service” and served for the duration of the War – on top of his 12 hour shift making Spitfire engines! In 1941 the AFS became the “National Fire Service”.

The Auxiliary Fire Service (AFS) was first formed in 1938 in Great Britain as part of the Civil Defence Service. Its role was to supplement the work of brigades at local level. Members of the AFS were unpaid part-time volunteers, but could be called up for whole-time paid service if necessary. 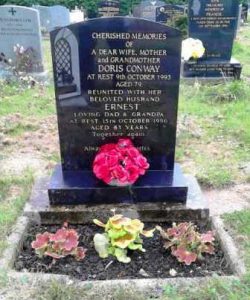 My dad continued to work at Qualcast Ltd. for the remainder of his working life, retiring in May 1968, after 52 years service.

Grandad’s youngest son was born at 2 Roe’s Cottages, Ct. 5, Siddals Road, Derby, on 18th January 1917 not long after his final discharge from the 1st Cheshires in 1916.

Cyril served with the Grenadier Guards during World War 2, but as yet details of his service have not been fully researched. Early in 1940 Uncle Cyril married Gladys Booth and his wedding photos show him in uniform. They had three children.

After the War Cyril returned to work in an Iron Foundry, in Derby, like so many members of the Conway family. He died on 8th March 2006, aged 89. 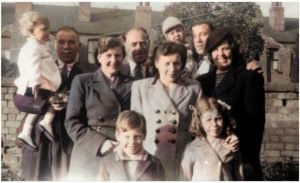 The photo left, dating from 1947, is the only known photo of Grandad’s immediate family.

The author is in his father’s (Ernest) arms on the left. Next to them is Albert and Ethel, with their older daughter, and on the right is Cyril and Gladys, with their 3 children.

Missing from the photo is Ernest’s wife Doris, who was taking the picture! 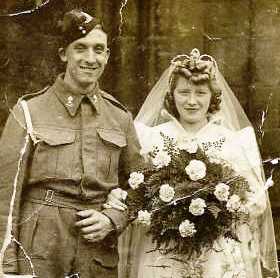 William Reginald was born on 14th February 1914 and married Florence Wragg in October 1940. They had one daughter, Valerie, born on 11th October 1942. Their wedding photo shows that William is already a serving soldier having enlisted in the 4th Medium Regiment, Royal Artillery.

The Regiment had been part of Churchill’s 1st Army during Dunkirk in 1940 and it was probably after returning from the evacuation that William and Florence married.

The Regiment was transferred to the 8th Army under Field Marshall Bernard Montgomery and helped defeat the German Army in North Africa. The 8th Army landed at Anzio and proceeded north through Italy.

William was Killed in Action on 24th November 1943, most probably during the Battle of Sangro. He now lies in Grave II. A. 28, Bari Cemetery.

Florence, William’s widow, continued to live in Derby until her death in The Derbyshire Royal Infirmary on 12th February 2001.

from an eye witness who fought in the 4th Battalion with William.