Officers, N.C.O.s & Men of the 1st Battalion, Commemorated on the La Ferte-sous-Jouarre Memorial 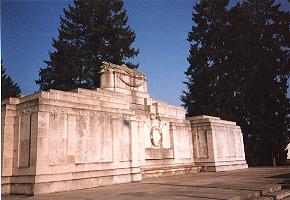 This memorial commemorates 1 Officer and 45 NCOs and men from the Cheshire Regiment, all of whom were killed in August and September 1914 and originally buried on the battlefields.

As the War progress over the same ground the identities of those buried were lost and their graves are now “Known Unto God“.

The La Ferte-sous-Jouarre Memorial commemorates 3838 officers and men of the British Expeditionary Force who died in August, September and the early part of October 1914 and who have no known grave.  Names are listed on the memorial by Regiments in order of precedence, under the title of each Regiment by rank, and under each rank alphabetically. 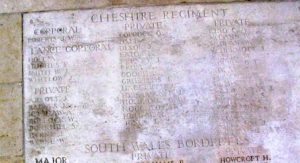 40 of the 1st Battalion commemorated here fell at Audregnies on 24th August 1914. This includes Lieutenant Kingdon Tregosse FROST whose body was subsequently identified as being buried at Wiheries Coounal Cemetery. Of the remaining 5, one fell at Le Cateau and four on the Aisne.

[Unfortunately, the Cheshire names were badly weathered when last visited.]

Audregnies Communal Cemetery contains the bodies of 14 soldiers of the 1st Battalion who were killed in action on 24th August 1914 and have no known grave.

Without doubt they are some of the 39 who are commemorated on the Memorial to the Missing at  La Ferte-sous-Jouarre who fell on that day.

… about  La Ferte-sous-Jouarre Memorial and other information