There are now 412 Commonwealth burials of the First World War in the extension (UK 126, Canada 276, South Africa 1 and India 9) The Commonwealth plots, which were designed by Sir Edwin Lutyens and W. C. Von Berg also contain some French and German war graves.

The extension to the communal cemetery was begun by French troops in October 1914, on land belonging to the Compagnie des Mines de Bruay. The French Tenth Army handed over this part of the line to Commonwealth forces in March 1916, the 22nd Casualty Clearing Station, which was established at Bruay, continued to bury in it. Nearly half the burials in the extension are from the Canadian Corps who occupied this sector from early in 1917.

The Cemetery contains just 10 soldiers of the Cheshire Regiment, including 1 soldier of from the original 1st Battalion. 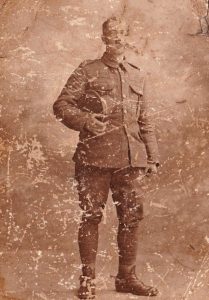 Personal:  Samuel was born in the parish of St. Mary, Birkenhead, Cheshire, in the December 1882, the son of Samuel (Boilermaker) and Elizabeth (née Radford) Tonge. He had a younger sister, Elizabeth, born in 1888.

Elizabeth, Samuel’s mother, died in 1898 and Samuel cannot be found on the 1901 Census, because he was serving with the Cheshire Regiment in South Africa in 1901 (see below). 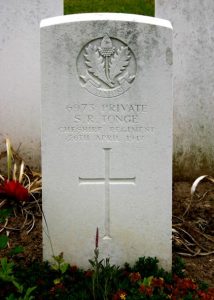 This Battalion was embodied for active duty in South Africa, with 450 men reported as returning home after the end of the war in September 1902. [Samuel’s CWGC inscription reads: “Served in the South African Campaign“.]

Samuel was awarded the Queen’s South Africa Medal with the Cape Colony and Orange Free State Clasps. By the time his medals were approved, 8th October 1902, Samuel had already re-enlisted.

Samuel’s new period was Service was extended on 17th January 1903 to 8 + 4, i.e. 8 years on ‘Active’ service followed by 4 years ‘Reserve’. He was almost immediately posted to the 2nd Battalion in India and his Service Papers show where he was stationed – mainly through admittances for various medical conditions!

He was in Colaba by 1st October 1904, Bangalore in January 1905, Calcutta in January 1906 and Secunderabad in November 1908 for at least the next two years. Samuel received his first Good Conduct Badge on 8th October 1904 and his second three years later.

As a Reservist he was recalled to the Battalion at the start of the War, but even then extended his Service again, at the end of his 12 years, for a further 4 years (16th October 1914).

At the outbreak of War Samuel was with the 1st Battalion in Londonderry before sailing from Belfast on the SS Massilia for Le Havre on 14th August 1914. He arrived in France on 16th August, confirmed by his Medal Index Card. As a member of ‘B’ Company he saw action at Audregnies on the 24th August, in the centre of the action under Captain J.L. Shore. Samuel was one of the 199 men who answered Roll Call at the end of the Battle.

The “Retreat from Mons” continued for almost 200 miles (c. 320 kms.) until finally on Saturday evening, 5th September came the order: “Pile arms and fall out, we remain here for a few hours.”

The War Diary shows that on 23rd October the Battalion were in billets at Rue de Bethune, but Samuel suffered: “Shell wound to left hand” two days later and was treated at No. 13 Field Hospital. His Service Papers record another wound “G.S.W. Cheek” on the 30th, though more likely resulting from: ” Battalion in trenches, sniping and artillery fire. Battalion on outposts. Casualties: 4 wounded, 5 missing.” (War Diary, 29th October 1914) Following this Samuel was admitted to No. 1 Stationery Hospital.

On 15th November he was posted to 15 Infantry Base Depot at Rouen, following convalescence, and returned to his Battalion as a “Transport Driver” on 13th December 1914. Samuel’s Service Papers then show little details, until 7th January 1916: “Serving with 1st Battalion“.

From 22nd December 1916 to 11th January 1917 Samuel got leave to visit his family in England. He was back with his Battalion in April and the War Diary records that on the 23rd they were relieved by 16/Royal Warwickshire Regiment and withdrew to Berthonval Wood. The next few days were in billets and on the 26th, the day Samuel died, “… at Camblain L’Abbée, men bathing and Coys. engaged in steadying drills“.

However, Berthonval Wood is near Vimy and Bruay, where Samuel is buried near to Bethune, about 30 kms. away. Samuel’s Service Papers do not record any further wounds, but the ‘Register of Soldiers’ Effects’ states that he died from “pneumonia” at the 22nd Casualty Clearing Station, at Bruay.

This brave and long serving soldier spent, in total, 14 years 193 with the Colours, not including his service with the 3rd (Militia) Battalion. He had been with the BEF in France since the start, 2 years 226 days.