Officers, N.C.O.s and Men of the 1st Battalion, Buried in Cabaret-Rouge British Cemetery 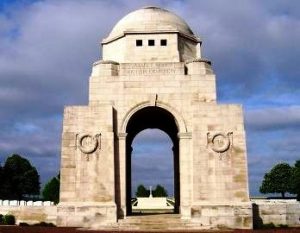 This is a huge cemetery and is still used for the burials of soldiers found around the battlefields. The Cemetery contains 7655 Commonwealth burials of the First World War, (6725 from the UK; 749 Canadian; 116 Australian; 7 from New Zealand; 43 from South Africa, and 4 from India) + 4 German. Of these 3187 are named – the other 4468 are “Known Unto God“.

The Cemetery was used from March 1916 until August 1917, but after the Armistice over 7000 soldiers were buried here having been brought from all over the Battlefield.

There is only one Cheshire Regiment soldier buried here for the period August – December 1914 – and he has a very interesting story behind how and why he ended up here.

Click the link at the bottom of the page to read about it ….. 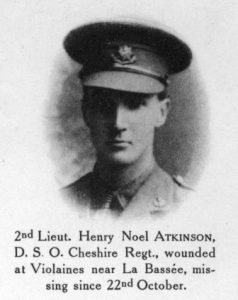 The 1911 Census (RG 14/33942) shows Henry living with his parents at Highfield Hall, Northop, Flintshire, where his father (now aged 77) was ‘Clerk in Holy Orders‘ at the Parish Church of Ss Eurgain and Peter. Henry’s occupation is listed as, “Gentleman Gardner“. The house boasted a ‘Companion‘ and 5 servants, mostly cooks and domestics.

Before the War Lieutenant Atkinson had been a keen golfer and was, in 1914, the reigning Amateur Champion of Wales. 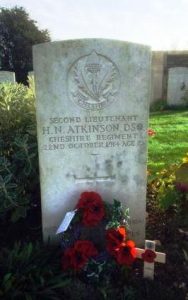 Military Service: Currently his Army records are unavailable. Noel’s Medal Index Card shows that he entered France as part of the BEF in 1914 and was killed in action on 22nd October 1914.

He joined the 3rd Battalion (Special Reserve), Cheshire Regiment, on 12th March 1913, joining the 1st Battalion for training on 1st November 1913. On mobilisation he embarked for France with the 1st Battalion on 14th August 1914.

Noel served unscathed through the fighting at Mons, Le Cateau and The Aisne until 22nd October 1914, near La Bassée, at Violaines, where he won his D.S.O. However, after the battle he was reported officially “missing” and was believed to have been captured.

He was awarded a Companion of the Distinguished Service Order (DSO) – London Gazette, 1 December 1914. (Shown left with his 3 Great War Medals.)

His citation read: “Henry Noel Atkinson, 2nd Lieut., 3rd Battn, The Cheshire Regiment. For conspicuous gallantry under heavy fire from both flanks by collecting a few men and checking the enemy, thereby facilitating the retirement of his comrades.”

and read about 2nd Lieutenant Henry Noel Atkinson (the Officer with “two graves”!)