Emma was the second of 8 children of James and Mary (née Cummings) Piggott, and was born at 46 Westbury Street, Derby, on 2nd April 1888.

Emma also had two younger brothers who also enlisted in the Great War, plus two sons of William Henry who served in World War 2. So, currently, we have five serving family members who bear the surname “Piggott“:

William was the fourth child of James and Mary (née Cummings) Piggott,  born 4 years after Grandma Emma, on 28th December 1892. He, like so many of the family, began his working life in an Iron Foundry and by 1913 he was working as a “Moulder“.

Just before War was declared in August 1914 William was posted to HMS Sparrowhawk (right), effective from 30th June 1914. His rank was “Stoker – 1st Class“. HMS Sparrowhawk was an Acasta‐class destroyer built to Admiralty design by Swan‐Hunter in 1912.

At the time of the Battle of Jutland on 1st June 1916, HMS Sparrowhawk was part of the Fourth Flotilla, based at Scapa Flow. It was made up of destroyers and two large destroyer leaders, HMS Broke (later of the Battle of the Dover Straits fame) and HMS Tipperary. More than a quarter of this flotilla was sunk at Jutland.

By 23:00 on 31 May, the Fourth Flotilla was screening the starboard wing at the rear of the British battle fleet as it progressed southwards, looking to regain action with the German fleet at first light.

It was during these confused actions that HMS Sparrowhawk found itself rammed twice by members of its own flotilla, ultimately succumbing to the damage sustained.

Her sister ship, HMS Broke, was hit by gunfire from the German Battleship SMS Westfalen, killing the helmsman at the wheel. Unable to control the ship the Broke collided and disabled the Sparrowhawk. Despite attempts to take her in tow she eventually had to be scuttled.

about the actions leading to the sinking of the Sparrowhawk

The other 65 crew members, including William, were saved and he achieved some fame when he returned on leave to Derby, especially for saving the ship’s mascot – the dog ‘Rough‘.

about the story in the account from ‘The Derby Mercury‘.

William’s next posting was to HMS Medina (right), also serving as a ‘Stoker‘. Whilst on leave, on 14th April 1917, he married Annie Moynihan, at Derby Register Office. The couple later had 5 children before Annie died in 1926. Two sons, James and Herbert (see below) both served in World War 2.

William married again, Nellie Trantham, and had another daughter.

about Service on the Medina, which extended beyond the Armistice in 1918

His Service Papers show that William was transferred to the Royal Navy Reserve on 1st March 1919, and he returned to live at 145 Siddals Road, Derby, and went back to his pre-War work as a “Moulder, Iron Foundry“. 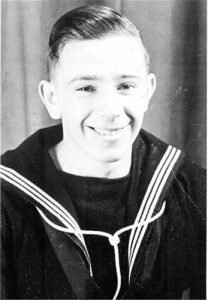 Like his father he enlisted in the Royal Navy, probably shortly after the outbreak of World War 2. [The 1939 Register shows him living with his father and step-mother, Nellie, at 53 Kelmoor Road, Shardlow, Derby.

Second World War records are only available to immediate family but from other family members’ records it seems that James served on board HMS Foyle Bank.

HMS Foyle Bank was a converted 5,500 ton merchant ship active during the Second World War. She was launched in 1930 and requisitioned in September 1939. She was converted into an anti-aircraft ship, equipped with 0.5 inch machine guns and four twin high angle 4 inch turrets.

The Ship fought back and 2/3 Stukkas were shot down, but 22 bombs found their mark and her guns were put out of action. She sank 5th July 1940 with a loss of 176 sailors killed out of a total crew of 19 officers and 279 crew.

about AB Jack Foreman MANTLE, who was posthumously awarded the Victoria Cross for his actions defending the ship.

After the War James married Elinor May Mather in 1948 and they continued to live in Derby. Elinor died in 1993 and James on 15th January 2006. 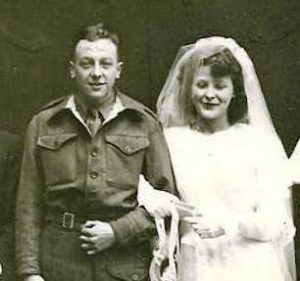 Second World War records are only available to immediate family but from other family members’ records and his wedding photograph with Irene Betty Johnson, it is clear that he served in the British Army during World War 2.

James was the 6th child (of 8) of James and Mary (née Cummins) Piggott and was born on 26th February 1899 at 6 Chetwynd Street, Derby. He was, therefore, the younger brother of Grandma Emma  Conway.

James enlisted in Royal Air Force on 25th June 1918, for the “Duration of the War“. The RAF was formed on 1st April 1918, following the renaming of the Royal Flying Corps. At the time of his enlistment he was still living at the family home – 145 Siddals Road, Derby, and gave his occupation as “Painter“.

On enlistment James was posted to 109 Squadron, on 3rd July 1918. The squadron first formed on 1st November 1917 as 109 Squadron Royal Flying Corps at South Carlton, Lincolnshire, and began training on the de Havilland DH.9, a single-engined piston biplane bomber but was disbanded on 19th August 1918 without becoming operational.

By then, though, James had been posted to “14 Training Depot School” at the new Squadron base at Lake Down, Wiltshire, arriving on 4th July 1918. Four months later he was posted again to the “1st Wireless School“.

However, the Armistice was signed on 11th November 1918 and James’ participation came to end and he was admitted to the R.A.F. “G” Reserve on 28th March 1919. [N.B. ‘G’ Reserve airmen were released from service after WW1, but were liable for recall whilst on the reserve.  The class was disbanded and all airman in the class were discharged on 30th April 1920 .]

After the War James married Fanny Carroll in Nottingham in 1922 and they had one daughter. The 1939 Register shows the family living at 37 Onslow Avenue, Lenton, Nottingham. James was working as a “Railway Coach Painter“.

William was born on 10th June 1893 at Court 1, Back of 14 Leaper Street, Derby (not a very prestigious address, bearing in mind he was the oldest of 11 children). His parents were William and Florence (née Tomlinson) Piggott. William Snr. was the older brother of James Piggott – Grandma Emma’s father, so Emma and William Jnr. were cousins.

William enlisted into the Leicestershire Regiment, in Derby, on 22nd April 1911, and joined the 3rd Reserve Battalion. Three months later, on 21st July, he left the the 3rd Battalion and was posted to the 2nd Battalion as a ‘full-time’ soldier, and moved to Glen Parva Barracks, Leicester.

Mounting casualties among the British Expeditionary Force in France, and the growing realisation that this was to be a long war, prompted the Indian Government, in September 1914, to offer an Indian Corps for service in France. The offer was accepted, and the Division, including the 2nd Leicesters, sailed from Karachi on 21st September, landing at Marseilles on 12th October 1914.

William and his Battalion travelled by train, via Orleans, to Lillers, arriving on 26th October, and 2 days later saw their first action in the trenches at Callone.

The War Diary reports almost continuous action until the Battalion was finally withdrawn from the trenches on 25th November. The War Diarist was very descriptive of each day’s action, including the day William was Killed in Action. Friday, 20th November.

the 2nd Leicesters’ War Diary for August to December 1914 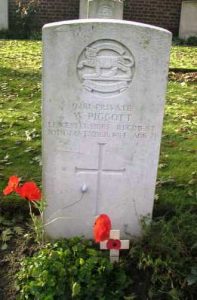 From the War Diary account it seems likely that Great Uncle William died as a result of a mortar attack on the Battalion’s trenches.

He was buried in Grave I.F.6., Le Touret Military Cemetery, in a section given over to his comrades from the Battalion.

The ‘Derby Daily Telegraph‘ (left) reported William’s death in a manner which was to become so familiar over the course of the next 4 years.

When William went off to join the 3rd Battalion in 1911 two of his ‘mates’ went with him, as they had consecutive Service numbers and the same enlistment date.

Private 9280 George Hardy was born in 1892, the son of Frank (a general labourer) and Jane Hardy and had lived in Whiteman’s Yard, off Carrington Street, Derby. The second of the trio was Private 9281 William Piggott.

Private 9282 Arthur Elks made up the sequentially numbered trio. He was born in 1890, the son of Paul & Mary Ann. Paul also worked in the lace factory, as a twist-hand, and Arthur grew up not far from the other two, in Litchurch Street.

The three pals went off to India together in what, I’m sure, they thought of as a great adventure from their mundane lives in Derby’s backstreet, and much as Grandad Conway had done in 1905. Unfortunately, none was to return to their families in the Holy Trinity Ward of Derby.

By the time the Battalion arrived back in France Arthur Elks was already dead. Left behind when his Regiment moved out, presumably ill or stricken by disease.

As we have seen, in November the 2nd Battalion was engaged in was later to be called the First Battle of Ypres. At 10.00 p.m. on the night of 15th November the Battalion was about 50 yards from the enemy and the War Diary states they, “heard movement & talking going on”.

An Officer took out a raiding party and George Hardy was the only casualty, killed in action.

Just five days later William Piggott was also killed in action and was buried near his friend in Grave I. F. 6 in the same Cemetery.

in November 2007 the Derby Evening Telegraph published the Author’s article about these ‘Three Derby Lads‘.

Although Joseph is quite a distant link in the Family Tree, being Grandma Emma’s 2nd cousin, the fact that he made the Supreme Sacrifice makes his inclusion here valid.

He was born in South Normanton, Derbyshire, in 1890, the oldest of 7 children of William Walter and Alice Effie (née Page) Piggott. Before joining up 1 month after the Great War began Joseph was employed as a “Miner“.

After serving in Ireland, Curragh, with the 7th Battalion Royal Munster Fusiliers, he transferred to the 5th Corps, Army

‘On the morning of the 13th the Battalion marched from Couin to Hannescamps and took over the section of trenches from E11.a.9.5 to E17.a.5.3 and the V Corps Cavalry took over the trenches south of the battalion. The OC V Corps Mtd Troops was in command of the whole front held by the two units and the battalion relieved the 5th Leicester Regt. The 58th Division holding the trenches on the right of the battalion. Casualties on 13th 2 O.R. killed, 1 O.R. Died of Wounds, 4 O.R. wounded.’ 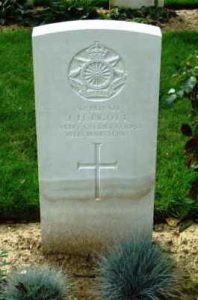 In addition the V Corps Cavalry (Glasgow Yeomanry and the Lothians and Border Horse) mentioned that between 1 .00 am and 4.00 am on the 14th the Cavalry and Cyclists made demonstrations with their Hotchkiss MGs to support (presumably by distracting the attentions of the enemy) the attacks by 7th and 46th Divisions (on either flanks) on Bucquoy. It was undoubtedly during this action that Joseph was killed.