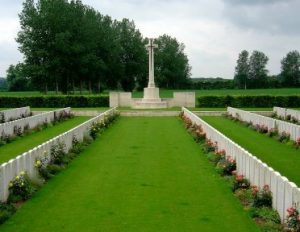 This cemetery contains 866 British and Common-wealth soldiers killed in the Great War (821 from the UK, 21 from Australia and 24 South Africans).

In April 1916, No 21 Casualty Clearing Station was located at La Neuville and remained there throughout the 1916 Battles of the Somme, until March 1917.

La Neuville British Cemetery was opened in early July 1916. Most of the burials date from this period, but a few graves were added during the fighting on the Somme in 1918.

The Cemetery contains 1 soldier of the Cheshire Regiment, who died in 1916.

He was the eldest son of George Mark (Electrical Engineer) and Agnes Frances (née Trott) Gleed. George had two younger brothers, Ernest and Arthur, and a younger sister, Elizabeth Mary.

The 1911 Census (RG 14/4222) has the family, with Agnes and Arthur, living at Woodbine, Tenterden, Kent – a small holding of 3 acres. George Alfred has presumably joined up by this time and is with the Battalion in Ireland, enumerated at Henry Place, Antrim. 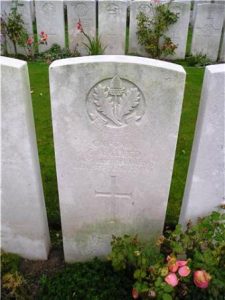 At the outbreak of War George was Orderly Room Sergeant, in ‘C’ Company and his Medal Card shows he entered France on 16th August, with the rest of the Battalion.

He fought under Captain W.E.L.R. Dugmore on the right flank of the Battalion’s action at Audregnies on 24th August and subsequently also survived the fighting at La Bassée and Ypres, in October and November 1914.

From Sergeant, in 1914, George was promoted through the ranks. The London Gazette, 22nd February 1916, reports: “Second Lieutenant (temporary Lieutenant) George A. Gleed to be temporary Captain. Dated 31st December, 1915“.

Strangely, however, the Gazette also reported: “Lt. G. A. Gleed (since died of wounds recd, in action) relinquishes the rank of temp. Capt. 4th Sept. 1916“. (Gaz. 3rd November 1916) So in fact when he died on the 6th September he was, presumably, technically, back to being (temporary) Lieutenant.

Fighting for the village of Guillemont had been going on for some time and a fresh attack was mounted between 3rd and 6th September. The attack started at 9.00 a.m. on 3rd September 1916 and immediately faltered as there had been insufficient artillery support and the Cheshires were ordered forward to reinforce 13th Brigade.

From their reserve position to the front line, they had to cross sloping ground in full view of the enemy and under heavy shell fire. On arrival at the front line, it was found that the trench was crowded with men from the attacking Battalions who had been forced to pull back. Gradually 13th Brigade was able to be withdrawn and the Cheshires took over the line, still under attack from artillery fire. Guillemont had been captured by the main force, but Falfemont Farm remained in enemy hands.

At noon on the 4th, orders were issued for another attack on the Farm. This was scheduled for 3.00 p.m. The attack would be undertaken by the Norfolks on the right, the Bedfords on the left and “A” and “C” Companies of the Cheshires in the centre.

The final attack upon the farm went in at 12 noon on the 4th, and after much grim fighting, the 1st Battalion, with their comrades of Norfolk and Bedford were successful. The Cheshire were not called on to go forward but George was reported to have been “severely wounded” (presumably by shellfire).

Captain Francis White, a recent transfer from the 6th to the 1st, was also killed. In addition six other officers were wounded and five warrant officers posted as ‘missing‘ never to be seen again. 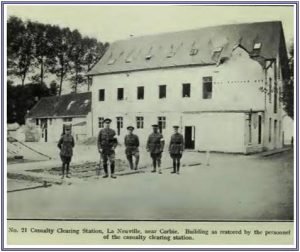 Crookenden wrote: “There was one particularly sad loss in Capt. Gleed who died of wounds received. He had come out with the battalion as orderly room sergeant in 1914.”

As George died of wounds it is likely this was at No 21 Casualty Clearing Station in La Neuville, near to where he is buried. (picture right)