Officers, N.C.O.s and Men of the 1st Battalion, Buried in Poperinghe Communal Cemetery. 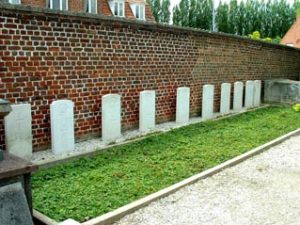 This cemetery contains 22 Commonwealth burials, 1 of which is ‘Known Unto God‘.

The town cemetery was used from early in the War before the opening of the ‘New’ Cemetery. The town of Poperinge was in the hands of the British for most of the war, although it was fairly close to Ypres, it was just out of range of almost all enemy guns.

It became a base for Casualty Clearing Stations and contains 1 named soldier of the Cheshire Regiment. 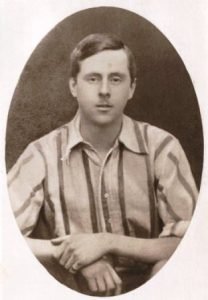 His mother was Catherine Elizabeth Anne, daughter of Frederick Thompson, of Wimbledon Park.

By the end of the War all three brothers were gone and one sister, Dorothy, was a widow. [see Footnote below]

The 1901 Census shows the older brothers both at boarding schools, Edward at Chernocke House, Winchester, and brother, Villers Chernocke, a boarder at The Knoll School, Aspley Heath. In 1911 Arthur (misnamed ‘Archer’) was also at Winchester. (Census RG 14/6122) He was ninth man for Wimbledon VIII, coxed School IV for two years and was appointed a House Prefect in 1910. In 1911 he followed his brother to Trinity College, Oxford where he served three years in the University OTC. [Source: Winchester College, Roll of Honour] 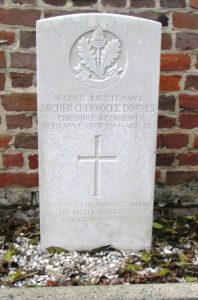 Military Service:  Currently his Army records are unavailable, and do not appear to have survived the Second World War bombing.

He obtained his commission in the 1st Battalion, Cheshire Regiment, on 2nd September 1913 and at the outbreak of war he was attached to the 3rd Battalion.

Arthur’s Medal Index Card shows that he was posted to the 1st Battalion, arriving in France on 9th October 1914, but he is not named specifically in the War Diary, which was normally done when new Officers arrived. The most likely date for him joining the Battalion was 16th October when 5 Officers and 248 replacements joined at Festubert.

Arthur died at Poperinghe on 20th November 1914 of wounds received in action at Neuve Eglise, near Bailleul, probably on 28th October. Contemporary reports state he: “had left his trench to help a wounded man of his Regiment when he was shot.” (Source: ‘The Roll of Honour‘)

Another brother, Edward Chernocke Downes, died in the Winchester College Sanatorium in March 1902 and is commemorated by a plaque in the College Cloister.

read more about the life of 2/Lt. Arthur Chernocke Downes and his family.