Officers, N.C.O.s and Men of the 1st Battalion, Buried in Amersfoort General Cemetery 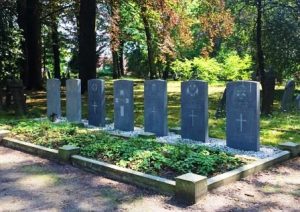 This cemetery contains just 7 World War 1 burials. Two of the Great War burials are from the Royal Naval Division.

The cemetery should not be confused with the much larger “Amersfoort (Oud Leusden) General Cemetery“, which contains 222 burials of W.W. 2.

There are a large number of war dead buried in Holland – over 33,000 Belgians alone. Within the others are 1751 British (including 139 Officers). Most of these, about 1580, are from Churchill’s Royal Naval Division who escaped being captured at the fall of Antwerp but were interned in a camp in the Town of Groningen.

The Cemetery contains 1 soldier of the Cheshire Regiment, who died in 1919.

Personal: James was born in Newcastle-on-Tyne, Northumberland in May 1884. He was the Son of George and Agnes Moore, of 42 Aspinall Street, Birkenhead. He had a brother, Alexander George, and a sister, Ellen.

At the time of his enlistment he stated his occupation as ‘Farm labourer‘. He was 5’ 6″ tall (1.69 m.), weighed 120 lbs. (8 st. 8lbs.) had a ‘fresh‘ complexion and dark brown hair and hazel eyes. His religion was Church of England. His vision was not very acute, but clearly good enough for his enlistment.

At the time of his death James was not married but a letter in his service papers from his “fiancée” (Edith ??) which is very unclear, seems to be seeking recognition of her status – perhaps in terms of his will. She cites James’ brother, George, as willing to attest to her claims.

Military Service: James attested at Birkenhead on 3rd December 1903 age of 19 yrs 6 mths, His terms of service were 3 + 9 (i.e. 3 years active service + 9 years reserve). However, he extended his service whilst stationed in India, at Wellington Barracks, in 1906, for a further 5 years.

He received two posting, firstly to Depot before, on 7th January 1904, being posted to the 2nd Battalion with which he went to India. He earned his two Good Conduct badges, on 6th April 1906 and 9th December 1908.

James’ character and conduct were stated as: “Exemplary” and “Good“; he was a first class shot and a good machine-gunner.

His main deployment was as a Drummer, which he did for 6 years. His service records states: “No cases of drunkenness for the whole period of his active service“. Also, “smart, intelligent and active. Equal to hard work and not afraid of it“.

He was transferred to Section A, 1st Class Army Reserve list on 8th December 1911 on his return from Jubbulpore. He was released from ‘Section A’ status a year later. On his discharge he went to work for the Post Office in Liverpool, although he had stated earlier that he would wish to work as an Auctioneer.

As a Reservist he was recalled to the 1st Battalion at the outbreak of War and his Medal Card shows he entered France 16th August. According to an account in the ‘Oak Leaf’ was taken prisoner after the Battle at Audregnies on 24th August 1914, where he fought under Captain Shore in the centre of the line.

His prisoner of war status was confirmed by ‘War Office Communiqué No 1155‘. Prison of War records show that was captured on 24th August and was “Not Wounded“. He was held at Diepholzer Prisoner of War Camp. At some time over the next 4 years he was repatriated via Amersfoort in Holland.

A report from the Infantry Record Office, dated 29th January 1919, stated that James had died on the 10th in Amerswoort (sic) Military Hospital, Holland. There are no details of James’ cause of death but Amersfoort Cemetery contains the graves of seven interned soldiers who died late 1918, early 1919, and who are most likely victims of the Spanish Flu epidemic. James survived almost 4½ years in captivity – only to succumb to the ‘flu!