N.C.O.s and Men of the 1st Battalion, Cheshire Regiment Killed in Action, November 1914 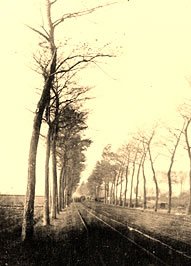 The start of November saw the Battalion in reserve 1½ miles south of Danoutre. On the 4th Captain Johnson Atkinson Busfield  took over the command of the Battalion from Lieutenant. Thomas Laurence Frost, who took over duties of Adjutant.  Captain George Bertram Pollock-Hodsoll, 3/Suffolk Regiment was attached for duty.

The following day, [5th November] the Battalion marched into Ypres and then a further 4 miles south-east along the Menin Road to relieve the 2nd Bedfordshire Regiment. The men of the 1st Battalion now occupied 350 yards of trenches just south of the 6 kilometre marker on the road.

Despite being decimated twice already, at Audregnies and La Bassée, the Battalion had received no reinforcements since Violaines, and in their new position was under constant, heavy bombardment from an enemy that turned out to be five times larger than itself; the difference in artillery was even greater. 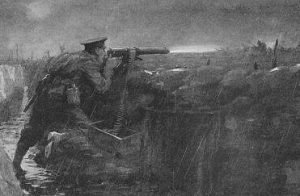 One survivor from the original Battalion was Quartermaster-Sergeant 7948 Downs, (“B” Coy).

During one German onslaught  which forced a gap in the trenches to the left of the Cheshires,  Downs and his machine gunners strove to prevent the enemy from pouring through, but one by one the men were struck down by shellfire and finally Downs was left alone.

He then worked his gun with extraordinary skill and determination, maintaining so hot a fire on the advancing masses that they broke and gave time for British reinforcements to come up.  For this action Downs was awarded the D.C.M. 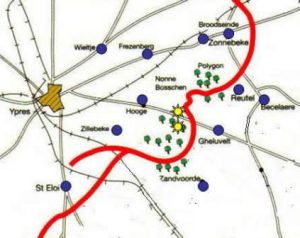 The Battalion was now involved in what became officially known as the First Battle of Ypres, particularly leading up to The Battle of Nonne Bosschen – 11th November 1914.

However, for the Battalion the days leading up to the 11th proved more damaging.  Captain Pollock-Hodsoll and 2nd Lieutenant Anderson were killed leading a counter-attack against the enemy who had penetrated the front lines, and although 25 prisoners were taken the Battalion lost 36 NCOs and men killed or wounded.

On the 11th itself the War Diary notes that Enemy appeared to massing in a wood South of the Battalion’s position but their shells scattered them and they were easily repulsed by rifle fire, with heavy casualties to them. It is understood that the Battalion’s rifle fire did much damage to the enemy attacking the Gordon Highlanders on the left flank.

The 14th was another day of heavy casualties. 30 NCOs and men were killed wounded or missing as the Battalion retired from the front line trenches under heavy shell fire to trenches 150 yards in the rear.

On the 21st November, as the Battle drew to a close, the War Diary records that since going into the trenches 35 men had been killed and 99 wounded. The number of missing was not known. The following day the Battalion withdrew to Locre and two days later on to Bailleul.

Gradually all British troops were replaced around Ypres by the French and November 22nd became the ‘official’ end of the First Battle of Ypres.

For this reason The 1914 Star, popularly but inaccurately known as the Mons Star, was awarded to all who served with their unit in France and Belgium between August 5th 1914 and midnight of November 22/23rd 1914.

To distinguish between the holders of the ‘1914 Star’ and the later ‘1914-15 Star’, which has the same ribbon, holders of the earlier award were permitted to wear a small silver rosette on their ribbon when the decoration itself is not worn.

The following 68 Officers, N.C.O.s and men of the 1st Battalion were killed in action or died of their wounds during November 1914: