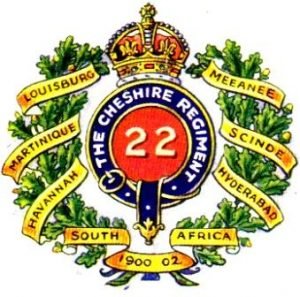 Immediately before World War 1, there were three battalions of the Cheshire Regiment in the Regular Army and four battalions of Territorials.

The 1st Battalion was in Londonderry in August 1914 and after war was declared on 4th August the regular Officers and men of the 1st Battalion were joined by over 55o Reservists to bring them to full fighting strength.

Early on the morning of 14th August 1914 the Battalion travelled in two special trains to Belfast, and boarded the SS Massillia. The ship sailed under sealed orders which, when opened, revealed the destination to be France.

N.B. The 2nd Battalion was in Jubbulpore, India in August 1914. It returned to England, landing at Devonport on 24th December 1914 and went into camp near Winchester. It travelled by road to Southampton on 16th January 1915 and embarked on SS City of Chester, landing at Le Havre 17th January 1915.

The focus of the accounts on this site are the Officers, NCOs and other ranks (ORs) who sailed with the 1st Battalion on 14th August 1914.

However, during the first few months of the War (i.e. up to end of December 1914) there were reinforcements and replacements who had a significant influence in making up: