Officers, N.C.O.s and Men of the 1st Battalion, Buried in Quiévrain Communal Cemetery. 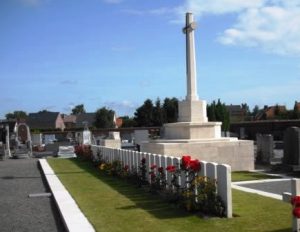 This cemetery contains 43 Commonwealth burials (8 from the UK and 35 from Canada) +2 French.

In 1914 the Belgian Red Cross established a hospital at Quiévrain, later taken over by the Germans, and the Communal Cemetery in the village was used by the Germans for the burial of British prisoners.

In November 1918, a British plot was formed in the North-East corner of the cemetery, and the existing British graves transferred to it.

The Cemetery contains 1 soldier of the original 1st Battalion, Cheshire Regiment who died presumably of wounds received defending the villages of Élouges and Audregnies during the British Expeditionary Force’s ‘Retreat from Mons‘ on 24th August 1914.

He is the only 1914 casualty in the Cemetery; all the others are from November 1918, mostly from 2nd Canadian Mounted Rifles Battalion, who died on 6/7th November 1918 – just 5 days before the Armistice.

Personal: John was born at Sydney, Crewe, Cheshire, in June 1885, the son of William Henry (Labourer) and Esther (née Catharall) Clarke of Birkenhead. He had an older brother, George, and 4 younger siblings, Annie, Jessie, Charley and Lucy. (1901 Census RG 13/3318)

Maud re-married Charles Tierney at Birkenhead, Cheshire, on 9th February 1915 – less than 6 months after John’s death – and was living at 4 Austin Street, Birkenhead, at the time of the compilation of the CWGC records. She, therefore, qualified for the remarriage Gratuity of £39 – worth a little over £3,000 today.

He was posted to the 1st Battalion on 12th November 1907. However, he extended his service with the Colours for a further 5 years and was transferred to the Reserve List on 25th February 1912.

As a Reservist John was recalled to the 1st Battalion at the outbreak of War and his Medal Index Card shows that he entered France 16th August 1914.

As a member of Captain E.R. Jones’ ‘D’ Company, John fought on the right of the line at Audregnies, or even in an advanced position under Captain W.S. Rich.