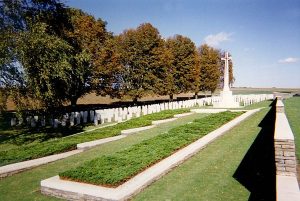 Fricourt was captured by the 17th Division on 2 July 1916 but the southern part of the commune, in which this cemetery is situated, was already in Allied hands. On the road from Fricourt to Bray, before it reaches the top of the plateau, are two points 71 metres above sea level, known to the Army as 71 North and 71 South. A little further on was a feature known as the Citadel.

The cemetery is in the Northern part of a valley, running from Fricourt to the Somme, which was known in 1916 as “Happy Valley.” It was begun by French troops and from August 1915, when the first Commonwealth burials were made, it was known as the Citadel Military Cemetery (Point 71). It was used until November 1916 and once in August 1918.(The cemetery was designed by Sir Edwin Lutyens.)

The cemetery contains 380 Commonwealth burials of the First World War, 17 of them unidentified.

The Cemetery contains 13 soldiers of the 1st Battalion, Cheshire Regiment, though bot from the original 1st Battalion. However, 1 Officer who arrived from the 3rd (Reserve) Battalion on 29th November 1914, though not strictly qualifying as an “Old Contemptible“, did lead troops in action in the year.

Personal: Nothing has yet been found of Alfred’s personal and civilian life.

Alfred’s Medal Index Card shows that when his wife applied for his medals she gave her address as “Lily Pilla, Eastcourt, Natal, South Africa“. 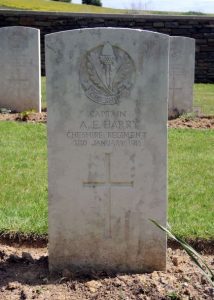 Military Service: Alfred’s served as a Sapper during the Boer War with the 6th Battalion, 1st Imperial Light Horse, South African Colonial Corps. He attained the rank of Lieutenant on 1st May 1901 (Gazetted 18th August 1901, p. 5336).

He relinquished his commission 25th March 1902 and granted the rank of Lieutenant in the Army “.. with permission to wear the uniform of the Corps.” (London Gazette, 2nd May 1902, page 2935).

Alfred qualified for the King’s South Africa Medal, with 2 Clasps.

He was posted to the BEF in France on 24th November 1914, and the War Diary for the 29th reads: “Battalion in billets: – Church parade. The following Officers arrived today: Capt H. S. Hodgkin, 1/Cheshire Regt, & took over command. Capt. A. E. Harry, 3/Cheshire Regt.”

The War Diary for 1st Cheshires shows the Captain was killed at 02.45 hrs on 3rd January 1916 shortly after relieving the 16th Warwicks in trenches at “C2 subsector“.

The Battalion had been billeted at Bray on 1st and 2nd January until moved up to trenches at 17.00. He is shown as being buried at 11.00 on the 3rd at “the Citadel“.