N.C.O.s and Men of the 1st Battalion, Cheshire Regiment Killed in Action, December 1914 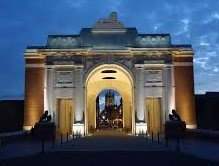 Such was the intensity of the fighting around Ypres that most of the men killed in action during the First Battle were never given a formal burial and have, therefore, no known grave. Instead they are commemorated on the Menin Gate Memorial. (right)

The Memorial now bears the names of more than 54,000 Officers and men whose graves are not known. 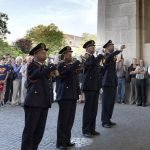 Every evening since 1928, at precisely eight o’clock, the Last Post – the traditional salute to the fallen soldier – has been played under the Menin Gate Memorial in Ieper, Belgium, by buglers of the local Volunteer Fires Brigade.

…… about the last post ceremony at the Menin Gate.

The First Phase of the War had come to an end around 22nd November, so, not surprisingly the men of the 1st Battalion spent most of December in billets in and around Bailleul and Dranoutre. However, under pressure from the French, limited attacks were renewed around Yser and Ypres.

Half of the Battalion at a time, by Company, were in and out of trenches at Wulvergham between the 18th and 28th December, but casualties were light. Generally, trench conditions were truly appalling; there were too few men and insufficient supplies of equipment and ammunition.

On 11th December the 1st/6th Battalion arrived to fight alongside the 1st Battalion and by the end of the month had suffered its first casualties (see below).

On the 24th December 5 new Officers and 444 NCOs and men joined the Battalion from England, so that now new additions numerically outnumbered the remnants of the original Battalion that had set out from Belfast in August.

The following 4 N.C.O.s and men of the 1st Battalion died of their wounds during December 1914:

Men of the 1/6th Battalion:

In the latter part of the month a number of casualties are recorded from the 1st/6th Battalion – not really part of the story of the 1st Battalion. However they have been included to show the very young age of some of these soldiers who were in Stockport in August 1914, part of the Cheshire Brigade, Welsh Division.

On 10th November 1914 they left the Welsh Division and landed in France to act as GHQ Troops, doing various duties in the rear areas. and on the 11th December 1914 the Battalion was attached to 15th Brigade, 5th Division, alongside the 1st Battalion and commenced duty in the Wulverghem sector.

Wulverghem was one of the areas where a “Christmas Truce” was said to have taken place. Lieutenant Charles Bertram Brockbank (1894-1976) served with 6th Battalion of the Cheshire Regiment. His Diary gives details of how Christmas Day 1914 unfolded.

The following 8 men of the 1/6th Battalion were killed in action during December 1914: