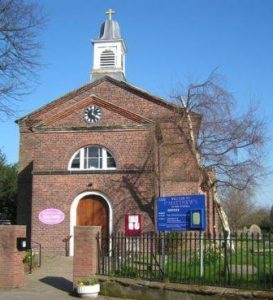 The Parish Church in Haslington (St Matthew’s) contains six burials of Great War casualties (+ 1 from he Second World War). All of these are local men who died at home probably from wounds received in action.

The Cemetery contains 1 soldier of the original 1st Battalion Cheshire Regiment, who, although severely wounded in action in August 1914, died under tragic and controversial circumstances.

Nikolaus Pevsner describes St Matthew’s as a church of “two builds“, both of which are “handsome“. The west part was built in 1810. The east end was built in in 1909 and was designed by Reginald T. Longden. 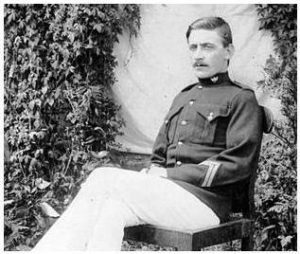 At the time of his enlistment he was employed as a Labourer. He was 5′ 9″ tall (1.75 m.), weighed 114 lbs. (8 stone 2lbs) had a ‘fresh‘ complexion (redesignated ‘sallow‘ after returning from France), grey eyes and dark brown hair. His stated religion was Church of England.

On the 1st June 1912 he married Maud Cooper in St Matthew’s Parish Church, Haslington, Chester. They had one son, Vincent Arnold, born 8th August 1913. The family lived at 12 Bold Street, Haslington. Between leaving the Army and being recalled he worked as a labourer with the London and North-west Railway at Crewe. 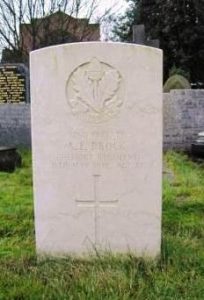 Military Service: Albert enlisted into the 2nd Battalion, the Cheshire Regiment, at Chester, on 8th January 1904 at the age of 19 yrs. 6 mths (suggesting he was born in June 1884 – not December quarter – see above).

His terms of service were 3 + 9 (i.e. 3 years active service + 9 years reserve). However, on 19th July 1904 he extended his service until the completion of 8 years with the colours.

He was transferred to Army Reserve ‘A’ on 7th January 1912, and Reserve ‘B’ a year later. He had earned both Good Conduct badges and his character was described as ‘good‘.

As a Reservist he was recalled to the 1st Battalion at the outbreak of War and his Medal Card shows he entered France 16th August 1914. He fought with ‘C’ Company under Captain Dugmore on the right flank of the Battalion’s action at Audregnies on 24th August, where he was seriously wounded and taken prisoner.

Albert received a shrapnel wound in the right forearm just below the elbow joint which shattered both the radius and ulna bones. The wound became septic and took 4½ months to heal. He spent 2 months in hospital at Wiheries before being transferred to a prisoner of war camp near Cologne, where he remained for 10 months.

Albert arrived back in England on 24th August 1915 a part of a prisoner exchange and was admitted to the 3rd London General Hospital on the 25th August 1915. A medical report stated that the bones had healed in ‘malposition‘ and his arm and hand were badly wasted and movement very restricted. There was also damage to the nerves and the circulation, such that the skin was atrophied. The report concluded: “The limb is almost useless below the elbow“.

However, through an oversight, Albert was not issued with an armlet to show he had been wounded in action and so received abuse and pressure for not being identified as having served.

Sadly, just a few months later on 11th May 1916 Albert was found hanged under the staircase of his home after suffering from deep depression. He is buried in St Matthew Churchyard, Haslington. His death prompted questions in Parliament and is reported in Hansard, 27 June 1916 vol 83 c703.

Sir Herbert Nield
asked the Under-Secretary of State for War whether his attention has been called to the circumstances which caused Private Albert Ellis Brook, of the 1st Battalion Cheshire Regiment, to take his own life, consequent upon his discharge from hospital as unfit for further service and the taunts which he experienced from those who, not knowing the facts, treated him as a shirker; whether he is aware that Private Brook was badly wounded at Mons, where he was captured by the enemy, and for a year was imprisoned in Germany, where he suffered much ill-treatment by the German authorities, being afterwards exchanged; and whether, in view of these circumstances and to prevent other discharged wounded men being similarly treated, the War Office will cause a badge, armlet, or some such distinctive device to be supplied to every man who has been rendered permanently unfit for further service on their discharge from hospital which shall indicate that they have been injured in the defence of the Empire and have not escaped from service under the plea of a conscientious objection?

Mr Harold Tennant
I am unaware of the circumstances which led to Private Brook taking his own life. He was wounded in the arm and captured in August, 1914, and was exchanged as a prisoner of war and admitted to the 3rd London General Hospital on the 25th August, 1915, and was discharged as no longer physically fit for war service in December, 1915. He was awarded a pension. It has been ascertained that, through an oversight, Private Brook did not have an armlet issued to him. Upon the general question of the issue of armlets, I would ask the hon. Member to await my reply to the next question on the Paper. 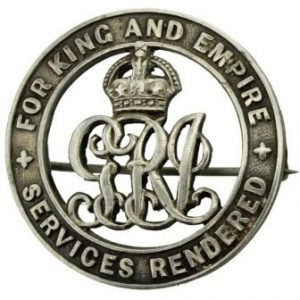 The Silver War Badge, sometimes erroneously called the Silver Wound Badge, was authorised in September 1916 and takes the form of a circular badge with the legend “For King and Empire-Services Rendered” surrounding the George V cypher. The badge was awarded to all of those military personnel who were discharged as a result of sickness or wounds contracted or received during the war, either at home or overseas.

….. about Private Brock by CLICKING Button