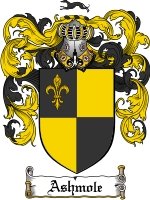 Grandma Kate’s parents, John and Mary Anne Elizabeth (née Ashmole) Newland grew up in military families, in India. In fact, Kate was born at sea, on board the SS Tyburnia, returning the family to England from Poona to Portsmouth.

“The Ashmoles” have a long history, stretching back 9 generations and beyond to the famous Elias Ashmole, born in May 1617, in Lichfield, Staffordshire. He lived until May 1692 and is buried in St. Mary’s Church, Lambeth, Surrey.

Elias Ashmole was a royalist, lawyer, antiquarian, scholar, and collector who gave his collections to the University of Oxford in 1677.

The Ashmolean Museum (right) was named after its founder Elias Ashmole and opened in 1683. It is widely recognised as being the first modern museum. Elias was Grandma Kate’s 9 times great uncle.

Her father, John, had been in the Army since 1839 and had met his wife, Eleanor (née Gannon), herself the daughter of a soldier, whilst serving in Aden, in the Diocese of Bombay. They married on 22nd August 1843, when Eleanor was only 13 years old.

This branch of the family, therefore, has two members who served their Queen (Victoria) on active service:

He was awarded 4 Good Conduct Medals and the ‘Indian Mutiny Medal‘ with clasps for the Defence and Relief of Lucknow in 1857.

He also received the India General Service Medal, with ‘Persia‘ clasp for service in the Anglo-Persian War of 1856/57.

about the Siege and Relief of Lucknow

As well as Mary Anne Elizabeth (John and Eleanor’s oldest child) they had five more children born in India, and after their return to live at 4 Castle Place, Derby, they had three more. 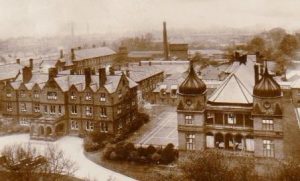 John worked as a ‘Labourer‘ until his death in The Infirmary, Derby (right), on 12th December 1889, aged 68. After John’s death Eleanor went to live with her son, Charles, and his wife, Kate, at 45 Copeland Street, Derby, where she died on 2nd April 1898.

John and Eleanor Ashmole are buried together in Grave 52593, Nottingham Road Cemetery, Derby.

John Gannon was the father-in-law of John Ashmole. He was born in the Westminster area of London on 20th August 1805.

N.B. The 17th Foot was an infantry regiment in the British Army dating back to 1688.  In 1804 the 17th Foot moved to India and remained there until 1823.  In 1825 the Regiment was granted the badge of a “Royal Tiger” to recall their long service in the sub-continent.

John returned to England and whilst at Chatham, Kent, his daughter Eleanor was born on 29th December 1829.  On 24th August 1830 John (and family?) sailed to New South Wales, Australia,  posted to Parramatta, NSW, and Sydney, until 1835.

John’s widow, Ann, returned to England and lived at Saltney Street, Liverpool, until her death in October 1865. She is buried in Ford Cemetery, Liverpool.

about “The First Afghan War “