Officers, N.C.O.s and Men of the 1st Battalion, Buried in Porte-de-Paris Cemetery, Cambrai.

This cemetery contains 112 named Commonwealth burials (95 from the UK, 9 from Canada, 6 Australians, 1 New Zealander and 1 South African). In addition there are another 6 “Known Unto God“.

Cambrai was occupied by the Germans on 26th August 1914 and in spite of the early British successes in the Battle of Cambrai 1917, it was not recaptured until 8th October 1918.

The Cemetery contains just 1 soldier of the original 1st Battalion Cheshire Regiment, who either was killed in action during the Battle for La Bassée. (see below)

Personal: According to the SDGW database Wilfred was born in Kelsall, Chester, and at the time of his death was resident in Barrow, Chester. However, the 1901 Census shows two Wilfred Wrights, but both born in Kelsall. One is the fifth child – of six – of Alfred (a Farmer) and Ann Wright, born in 1890. (1901 Census RG 13/3366)

The other (born 1891) is the eldest son (of two) of John (a Carter) and Annie. Other documents (below) confirm that this latter option are Wilfred’s parents. He was born at Grub Lane, Kelsall, in the June quarter 1891. The 1901 Census (RG 13/3366) shows the family, now with Wilfred’s younger brother, Arnold (born January 1897), living at Oscroft, Tarvin, Chester.

The ‘Register of Soldiers’ Effects‘ confirms that “Death Presumed” on 22nd October 1914, whilst the CWGC Record gives Wilfred’s date of death as 4th November 1914. The October date is confirmed on Wilfred’s Medal Index Card – listed as “Missing“. 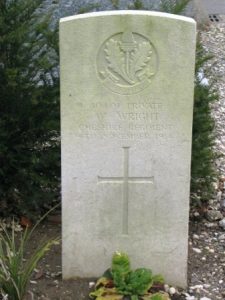 Military Service: Currently his Army records are unavailable and were probably destroyed in Second World War bombing. All that is known is that Wilfred enlisted at Chester.

His Medal Index Card shows that he entered France on 16th August 1914 and was killed in action on 22nd October 1914 – which is the date given in the SDGW database.

However, his CWGC records states he was killed on 4th November, the date confirmed by his gravestone.

If the first date is correct he was one of 53 (54?) killed on the last day of the Battle to take La Bassée, centred on Violaines. Most of those casualties have no known grave and are commemorated on the Le Touret Memorial.

If the 4th November is the correct date, on that date the Battalion were in reserve south of Dranoutre and no casualties were reported in the War Diary. Not until the commencement of the First Battle for Ypres did the Battalion suffer more deaths in action.

As the Medal Index Card gives his date of entry into France as 16th August 1914 he was clearly a member of the original 1st Battalion, but his name does not appear on the published list.

The other oddity is that Porte-de-Paris Cemetery is a long way from either La Bassée or Violaines. For someone to fall in these places would almost certainly necessitate a burial much closer – hence Wilfred is the only 1st Battalion man buried here.

Another issue to bear in mind is that Cambrai was occupied by the Germans on the 26th August 1914, it was not re-captured until the 8th October 1918. A great part of Porte-de-Paris Cemetery was used for the burial of German and Allied dead during the War, and a large German obelisk was erected. The German graves, however, were removed after the Armistice, and the British graves were regrouped in two Plots on either side of the local War Memorial, near the middle of the cemetery.

It would not have possible, therefore, for Wilfred’s comrades to bury him there in October or November 1914. His Pension Record Card shows, he was reported ‘Missing‘ at La Bassée on 22nd October, leaving the possibility that he was captured and subsequently died whilst a prisoner of war. 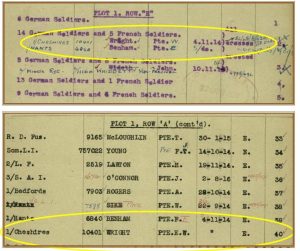 After the Cemetery was organised (bottom image) Wilfred was re-buried in Grave I.A.40, alongside Private Benham. The German and French soldiers having been repatriated.

German prisoner of war records also confirm that Wilfred died in captivity and was buried in Porte-de-Paris “Friedhof” (Cemetery) on 4th November 1914. It is fairly conclusive, therefore, that Wilfred was not killed in action on 22nd October, but was probably captured on that date [the War Diary reads ” ….. 200 N.C.O.s & men missing including Sergeant Major.”] and later died of wounds or some other cause on 4th November.