Officers, N.C.O.s and Men of the 1st Battalion, Buried in Bethune Town Cemetery 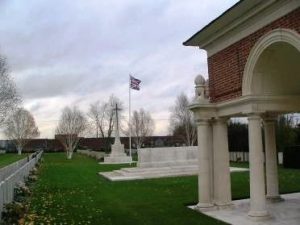 The Cemetery contains 5 named soldiers of the Cheshire Regiment who all died of wounds received in action near the village of Violaines, in the battle between 18th and 22nd October 1914.

Also buried in this Cemetery is Private 20101 Ernest Bryant (10th Battalion) who was one of the 6 men of the Cheshire Regiment “Shot at Dawn” during the War.

Use the links below to read a little more about each man and see where he is buried. All of the men named below were awarded the 1914 Star (with “clasps and roses“), the British War Medal and the Victory Medal.

Privates Brown and Swift were part of the original Battalion that sailed for France on the S.S. Massilia on 14th August 1914. The other 3 joined as replacements/reinforcements in September. 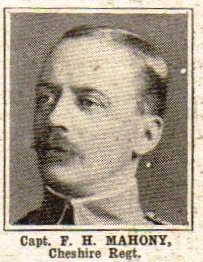 Frederick married Ethel Cicely Paterson at St. Mary Abbots, Kensington, on 12th July, 1905, and they lived at Holland Park, London W1. They had two children, Cynthia Patricia, born 14 March 1909, and Frederick Henry Patrick, born 11 February 1911, who applied for the ‘1914 Star‘ in respect of their late father, on 18th January 1919.

By the 1911 Census Frederick (now a Captain) was back in India stationed in the Regimental Barracks of 2nd Battalion Cheshire Regiment, The Ridge, Jubbulpore, India. (RG 14/34980) His wife and two children had remained in England, living with Ethel’s father, John, at 42 Holland Park Kensington.

Military Service:  Frederick’s obituary in “De Ruvigny’s Roll Of Honour 1914-1924” states that enlisted in 1892 in the York and Lancaster Regiment and served for five years in the ranks. He was gazetted 2nd Lieutenant to the 1st Cheshires, 24th August 1898, and promoted Lieutenant on 2nd June 1900, and Captain on 10th February 1906.

He was employed with the West African Frontier Force, 28th November 1900 to 9th July 1904, first in Northern Nigeria, during operations against the Emir of Yola. He gained the 1901 King’s South Africa Medal (with clasp), and subsequently in Southern Nigeria with the Aro Expedition 1901-2 (clasp).

Frederick was not part of the original contingent of the 1st Battalion that left for France in August 1914 and in view of his age, 40, it is likely he was a reservist at the outbreak of War, as the 2nd Battalion did not arrive back in England until December.

His Medal Index Card shows he entered France on 25th September and the War Diary show that on 16th October he “took over command of Battalion and brought up 2/Lieuts Napier, May, Woodhead, Carr, Anderson and 248 reinforcements“.

During this time he led a successful bayonet charge under very heavy artillery fire, and showed excellent coolness and courage, and was complimented by General Count Gleichen on the excellent work of his Battalion.

Captain Mahony was listed as a ‘wounded‘ in the War Diary on 21st October following the action at Violaines, near La Bassée, and he died of his wounds in Hospital the following day. (Crookenden, p.28, states he was “mortally wounded” on the 21st.)

It was reported that while on his way to give orders to some men in the trenches, he was mortally wounded by a bullet from a German sniper, who fired at him from a cottage window, over 1,000 yards distant, the bullet striking him in the shoulder and penetrating to the lungs. 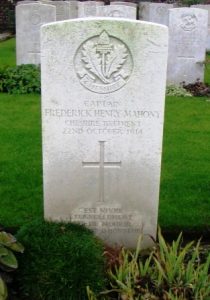 He was removed to the Clearing (114) Hospital at Bethune, where he died a couple of hours after his arrival. Before starting on his fatal journey to the trenches he had been asked, “Why not send a man with the message?” to which he replied, “I won’t ask a man to do what I won’t do myself.”

He was one of the 16 Officers and other ranks Mentioned in Field Marshall French’s Despatch of 14th January 1915 (Source: ‘London Gazette Issue 29072 published on the 16 February 1915. Page 1662‘). He had been strongly recommended for the D.S.O. by General Count Gleichen and according to information received by his relatives from the War Office this honour would have been duly awarded him had he lived.

Capt. Mahony’s full entry in “The Bond of Sacrifice“. (A two volume work detailing biographies of Officers who had died from August 1914 until June 1915.)

The section of the Bond of Sacrifice for Captain Mahony detailing his death also states that “he was rescued from the fighting line… by Sgt. Shubotham …. who earned the VC for his courageous act.”

Captain Mahony’s personal page to read more about his family, his private life and military career.

The 1911 Census (RG 14/16432) shows the family living at 87 Chapel Street, Bignall End, Newcastle, Staffordshire. (Name spelled: BEDDER) Harry is working as a ‘Coal miner hewer‘, as are his brothers, except George (see below).

In the March quarter 1914 Harry married Florence Maud Aspinall. His Pension Record confirms that they having no children. The same source records that in February 1915 Florence received his total effects amounting to £2 3s 8d [£2.18, equivalent to about £175 today – 2020]. Four years later she received a War Gratuity of £5 [£225 today]. 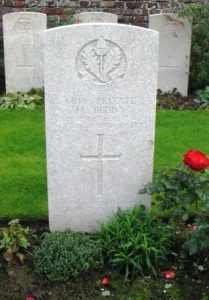 His Medal Card shows he entered France on 12th September and may have been one of the reinforcements joining the Battalion on the 24th, when the Battalion was in trenches in the Mesnil Valley [September War Diary].

His period of service was 7 + 5, so was in India at the outbreak of the War in Jubbulpore. The Battalion returned to England, landing at Devonport on 24th December 1914. The Battalion  was attached to 84th Brigade, 28th Division, at Winchester. It was posted to France and landed at Le Havre 17th January 1915.

Fred served as a “First Aid Stretcher Bearer” and his Service Record shows the following citation from the OC 1st Wiltshire Regiment, relating to the gallant conduct of Sgt. Wynne and Pt. Bedda:

On 12th March 1915 Fred and “Sgt. Wynne” brought in an Officer from the 1st Wiltshires, for which action they received a commendation from their C.O. after a letter from the O.C. 1st Wiltshire Regiment. (Recorded – left – in Fred’s surviving Service Papers.)

This Officer was Lt. Sidney Frederick Hooper, 1st Wilts., attached to Duke of Cornwall’s Light Infantry. He did not survive and is buried in Grave F.37., Kemmel Chateau Military Cemetery.

On 8th May 1915 two Corps of the German forces attacked the 28th Division astride the Menin and Frezenberg roads. The attack was supported by a heavy a bombardment of shell and gas weapons.

Three Companies of the 2nd Battalion were wiped out, but the 4th fought on and preserved a semblance of order as it withdrew. The losses were severe: 6 officers were killed, three other officers and 200 men were wounded and 182 were missing.

Frederick Bedda did not survive the attack. He has no known grave and is commemorated on Panel ref. 19-22 on the Ypres (Menin Gate) Memorial.

He was eventually transferred to the 7th Battalion, North Staffs. Regiment, and on 2nd July 1915 he arrived in the Balkans Theatre of War. His Battalion. part of the 29th Division, landed at ANZAC Cove between 3rd – 5th August 1915.

The Battle of Sari Bair (also known as the Battle of the Nek), was launched on 6th August 1915 and Ernest was Killed in Action 2 days later. Ernest has no known grave and is commemorated on the Helles Memorial, Turkey.

In just 10 months in the first year of the Great War the Bedda family had lost three of its sons.

Personal: Thomas’ Pension Records show that he was the son of Bridget O’Neill, 16 Chapel Street, Quebec, Durham. O’Neill was her maiden name; she was married to James O’Neill (Coal Miner – Hewer) and that a total of 10 children.

John Thomas was their oldest child, born in Sacriston, Durham in the June quarter 1893. Then came, Lena, Patrick, Elizabeth, Agnes, Michael, Maggie, James and Katherine (another child died in infancy).

Military Service: Thomas enlisted in the Cheshire Regiment at Chester. Currently his Army records are unavailable, probably destroyed in Second World War bombing. However, his Army Service Number, 9744, would suggest an enlistment date towards the end of 1913.

He was a Regular Soldier serving with the 1st Battalion and at the outbreak of War was stationed in Londonderry. He sailed on the SS Massilia on 14th August and his Medal Card confirms that he entered France on 16 August. He fought under Captain Jones or Captain Rich on the right flank of the Battalion’s action at Audregnies on 24th August.

Thomas died of wounds received during the action at Violaines and La Bassée between 18th and 22nd October 1914.

During those 5 days 83 NCOs and men were killed or died of wounds received attempting to take La Bassée. Records show that Thomas died at “6th Clg. HP” and was buried in Grave I.C.17.

Personal: Joseph was born in St John’s Parish, Barrow-in-Furness in the March quarter 1896, the eldest son of James E. (Shipyard worker) and Margaret A. Park. 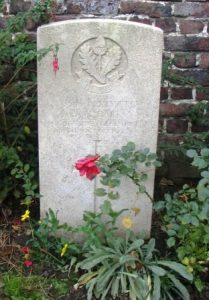 His Medal Card confirms that he entered France on 31st August as one of the reinforcements to replace those lost at Audregnies.

The War Diary stated that on 5th September: “Reinforced by Lt Hartford, 1 Cheshire Regt and 90 other ranks at 4 p.m.”

During the action at Festubert and Voilaines on the 12th to 15th October 27 men were reported wounded. Joseph was undoubtedly one who died of wounds received during this action. On the 15th “Enemy shelled position, especially machine guns, and ‘B’ Company’s trenches – 12 N.C.O.s & men wounded.” Joseph died in the 15th Field Ambulance at Bethune, and was buried in Grave I.D.20 nearby.

Personal: Ephraim was born in the March quarter 1887, at Stalybridge, Cheshire, son of John J. (Painter) and Eliza Anne Swift.

He had two older sisters, Mary Adelaide and Martha Anne, and a younger sister, Emily. (1891 Census RG 12/3290) Ephraim was named after his grandfather, a grocer, who lived nearby. When he enlisted in 1905 Ephraim was employed as a “Cotton Labourer“.

By the 1911 Census Ephraim was stationed in India in the Regimental Barracks of 2nd Battalion Cheshire Regiment, The Ridge, Jubbulpore, India. (RG 14/34980)

He married Alberta Cockayne in December quarter 1912, at Walsall, Staffordshire. There is no record of them having any children. 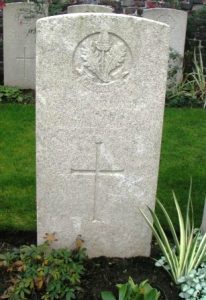 Military Service:  Ephraim enlisted in the 2nd Battalion, Cheshire Regiment, at Stalybridge, Cheshire, on 27th March 1905. He was aged 18, on a 7 + 5 (7 years active service plus 3 years reserve). If so he would have been transferred to the Reserve List in March 1912.

As a reservist he was recalled to the 1st Battalion at the outbreak of War and his Medal Card confirms that he entered France on 16th August.

He fought under Captain Jones or Captain Rich on the right flank of the Battalion’s action at Audregnies on 24th August.

During the action at Violaines to take La Bassée on the 17th, 18th and 19th October, 40 men were wounded. Ephraim was one who died of wounds received during this action. He died at No. 6 Clearing Hospital on 19th October 1914 and was buried nearby.

The Bethune Town Cemetery is one of the Cemeteries in France and Belgium that contains the bodies of one of the 306 soldiers “Shot at Dawn” (but not 40 others executed for murder and mutiny) during the First World War.

Six of these men were from various Battalions of the Cheshire Regiment, though none from the 1st Battalion

On 16th August 2006 Des Browne, the Defence Secretary, announced that all 306 had been granted posthumous pardons and subsequently a Memorial was erected in the National Memorial Arboretum to the memory of these men.

One of the Cheshire Regiment’s executed men, Pt. Bryant, is buried in this Cemetery.

On return to his unit, he made off during training exercises, but was arrested 4 days later in Boulogne.  On again being returned to his unit, Bryant again absconded just before going into the line.  When arrested in Bailleul 9 days later, he gave false particulars of identity.