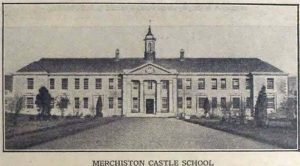 Personal: Ernest Rae Jones was born on 17 November 1877, at Saint John, New Brunswick, Canada, the son of Mr. and Mrs. Simeon Jones.  He was educated at Merchiston Castle School, Edinburgh, (right) and resided at Caverhill Hall, St Johns, New Brunswick, Canada. He had at least one brother, G. West (see Footnote below) 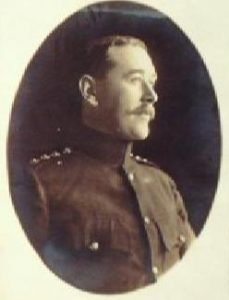 On 10th November 1908 Ernest married Geraldine Esme Belinda Prior in Lichfield Cathedral. She was born in the Barton Regis District of Gloucestershire, on 7th November 1883, so was about 5 years younger than him.

Geraldine was the daughter of Major-General John Edward Hale Prior of the Staffordshire Regiment, who died suddenly in January 1900 shortly before taking up command of the 15th Division in South Africa. Her mother was Annie Gadd (née Matthews). In 1901, aged 17, she was a boarder at Eastbury House School, Watford, Herts. 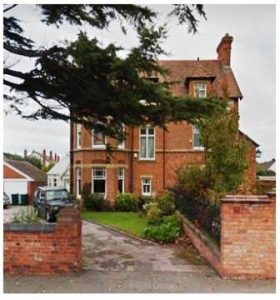 Military Service: The London Gazette (22nd November 1898) detailed his joining the Regiment: “.. from the Local Military Forces, Canada, to be Second Lieutenant, in succession to Lieutenant W. Auchincloss, resigned. Dated 23rd November, 1898.” It is likely, therefore, that Ernest served in the South African (Boer) War.

Ernest gained further promotion to Lieutenant, 4th June 1900; Captain, 10th February 1906; and from 9th August 1904 to 8th August 1907 was Adjutant of his Battalion. From 9th November 1910 he was appointed Adjutant to the Special Reserve, and at the end of that 3 year appointment, returned to the Regiment in Londonderry.

On 7th September 1907 Ernest had sailed back to Canada to see family, no doubt, on board the S.S. Lusitania, which played a vital part in the Great War in May 1915 when it was sunk by a German U-boat 11 miles off the southern coast of Ireland, killing 1,198 passengers and crew. The sinking presaged the United States declaration of war on Germany. 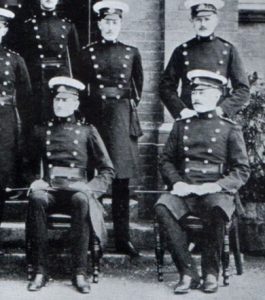 The photograph – right – was taken in Londonderry just before the Battalion left for the Front. Captain Jones is seated, front row, extreme right. On his right is seated his 2nd i/c Captain W.S. Rich. Behind them (left – right) are Captains J.L. Shore and B.E. Massy.

The Battalion marched into the line south of Mons and first saw action at:

the Official War Office Map of the Battlefield

On the night of 23rd August the Battalion moved into position along the Mons-Valenciennes road, with ‘D’ Company on the right straddling the railway line. 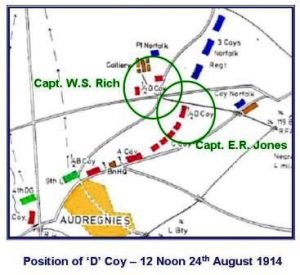 Captain Jones was the Officer Commanding “D” Company, 1st Battalion, in position to the right of “C” Company during the Battle at Audregnies on the 24th August 1914.

He had sent Captain W. S. Rich with two Platoons on the right half of “D” Company, on the extreme right of the Battalion, to support 1st Norfolks near the Colliery.

The Battalion’s Companies’ positions were as shown on the Map (right).

At about 3.45 p.m. the Battalions in action began to retire. Captain Jones, on the right flank with the support platoons of ‘D’ Company had also it seems, got news of the withdrawal from, presumably, stragglers out on his flanks, because he began to retire down the railway line.

The War Diary states that at about 2.30 p.m. Colonel Ballard gave orders for all troops to retire in an Easterly direction – these orders never reached the two front platoons of ‘D’ Company. 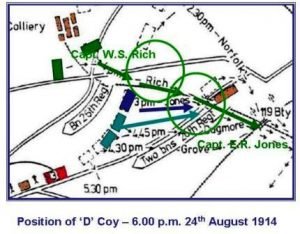 At about 4.00 p.m. Captain Jones noticed platoons of “C” Company to his right retiring and asked what they were doing. Private 9887 Wood replied: “The people on our right rear are retiring.”

Capt. Jones asked for someone to go and find out and Lieutenant K. T. Frost said: “Right Sir! I will go.”

One source (Col. Arthur Crookenden) states that Captain Jones had withdrawn but returned to the line, probably looking for Captain Rich and his two platoons. It seems he moved off in the direction of the railway line towards the Bois d’Audregnies. It was hereabouts the remnants of the Company ran into the German Magdeburg Division.

Captain Jones fired on them with his revolver and was immediately killed, along with Drummer Hogan. [N.B. Drummer 9696 Ernest Hogan, ‘A’ Coy., is buried alongside Captain Jones in Wiheries Communal Cemetery.] Corporal Crookes and Private Garrad were wounded and Garrad died shortly after, shot through the stomach. [N.B. Pt. 10303 Frederick Garrad is buried in Aubichicourt Cemetery.]

The stragglers moved down the railway line towards the Bois d’Audregnies. They passed a small group of trees, then along a track in a field, into a hedge-bordered lane, then to pasture-land south-west of Wiheries. ‘Here‘, writes Crookenden, ‘they ran into the Magdeburg Regiment which was going into bivouac. Of those who remained Capt. Jones and Pte. E. Hogan were killed.’

N.B. The full account extracted from the regimental history reads: ‘Captain Jones, with support platoons of “D” Company on the right, must have received early news of the withdrawal, either from the groups of cavalry which were retiring through his position or from the left company of the 1st Norfolks. Although it is impossible to say, with any accuracy, at what time the various occurrences took place – everyone was too fully occupied to glance at their watches – it seems clear that these platoons started to retire down the mineral railway about the same time as the two left platoons of “B” Company withdrew from the left flank (3 p.m.)

‘Shortly after Stapylton [Major B. H. Chetwynd-Stapylton, Senior Major] had moved off, and while No. 9 Platoon was reforming, Captain Jones appeared. It is not clear how he came to be there, but it is probable that, after having ordered his company to retire, and having seen or heard nothing of the rest of the battalion, he returned, either with the object of getting into touch with Battalion Headquarters, or to find out what had happened to his two platoons under Rich.

Having heard the latest information from Raynor, he moved off with No. 9 Platoon, which now left the road and made for the railway. To reach the railway several hundred yards of rising ground had to be covered which was under heavy machine-gun fire, and, before the shelter of the cutting was found, the platoon had been reduced to some half a dozen men. The retirement was then continued down the railway line to the Bois d’Audregnies. Here Raynor himself fixed his bayonet and acted as scout. On leaving the cover of the trees, the party took to a track and, later, to a hedge-bordered lane, which brought them to some enclosed country south-west of Wiheries. Here they ran into the Magdeburg Regiment which was going into bivouac. Of those who remained, Captain Jones and Hogan were killed.’

A German officer ordered captured British prisoners to carry their bodies to a freshly dug grave in a nearby field. After the burial service, the Germans fired three volleys over the grave.

Sometime later, maybe by the villagers, Ernest was reburied in the village communal cemetery.

His gravestone reads: “For his bravery he was given a military funeral by the Germans.” Captain Jones is the first Canadian to die on active service during the First World War.

The photographs below show Wiheries Cemetery in the early 1990s and as it has been subsequently changed. Captain Jones’ and Drummer Hogan’s graves are the fourth and fifth from the left.

The following is extracted from a letter published in the Regimental History, written by Lieutenant Colonel D. C. Boger, D.S.O., (picture right) who commanded the 1st Battalion at Mons, during which action he was severely wounded.

It was written on 29th August 1914 whilst Colonel Boger was in a Red Cross Hospital at Wiheries: ‘…I hear Jones, tho’ wounded, refused to surrender and pointed his revolver at them. They shot him but left his arms, and the 66th Regt. buried him with mil’y honours and a speech was made at his grave. A very gallant man…’

Corporal W. Crookes has written a full account of the day’s events and was witness to the German’s burial of Captain Jones.

Download a copy (CLICK icon left) of this (rather long) account from Corporal W. Crookes, which was probably published in the 1920s in the Regimental newspaper “The Oak Leaf“.

Corporal Crookes’ account covers the whole day really, a day which has gone down in the Regimental history as one of its finest hours.

Along with the Norfolks they managed to hold off 2 whole Divisions of the German army to allow the rest of the BEF to withdraw to fight another day – but at great loss.

The News-cutting (above) is of a report of Ernest’s death in a Canadian paper.

This entry was posted in Wiheries Communal Cemetery. Bookmark the permalink.