Personal:  Thomas was born 9th June 1889, the son of Sir John Meadows and Henrietta (née Kelsall) Frost (married June quarter 1884), of Upton Lawn, Chester, according to Crookenden, a descendant of the original Miller of the Dee.

Thomas attended Charterhouse School (Gownboys House), between 1901 and 1907 and went up to Clare College, Cambridge, from Charterhouse in October, 1907. It was reported that his weak health prevented him from taking a great part in College life, though he had many friends in and out of Clare.

Sir John was also responsible for the building of the Chester War Memorial which bears the inscription: 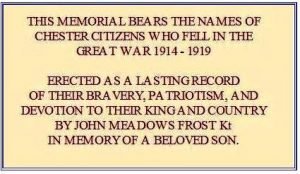 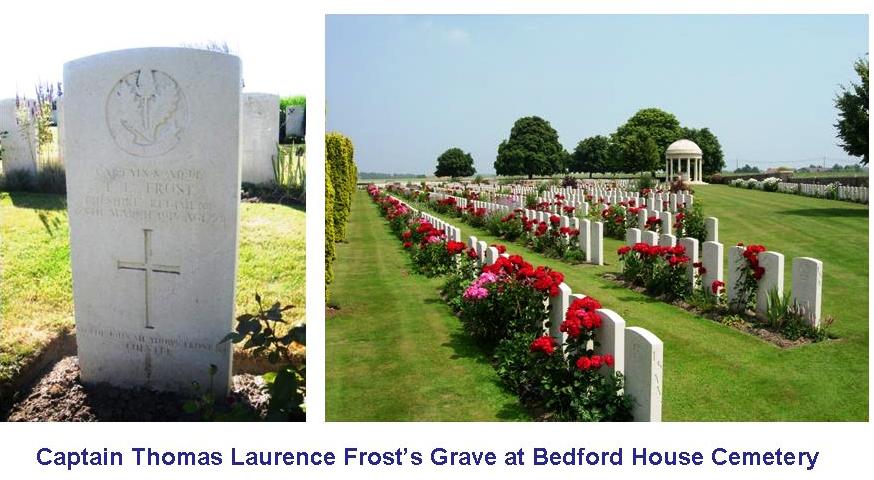 His Medal Index Card shows he entered France with the 1st Battalion on 16th August 1914 as the Transport Officer attached to ‘D’ Company. This company fought on the right of the line during the Battle at Audregnies under Captains Ernest Rae-Jones and William Suttor Rich.

[N.B.  This was, of course Grandad Conway’s Battalion and Lt. Frost was one of his Officers] 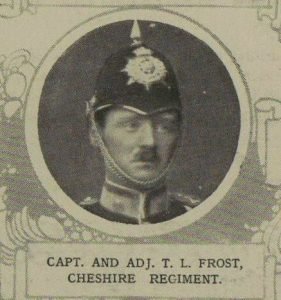 On 22nd October 1914 after the death of Captain Mahony in hospital, Lieutenant Frost took over command of the Battalion. He was relieved by Captain Woods three days later, but assumed command again on 30th October and led the depleted Battalion, now in 15th Brigade, to Neuve Chapelle and the First Battle of Ypres. On 4th November Captain J. A. Busfield, Cheshire Regiment, took over command of Battalion. Lieutenant Frost took over duties of Adjutant.

Thomas wrote letters home to his father describing the 1914 ‘Christmas Truce‘. These were reproduced in part in “Silent Night, The Story of World War 1 Christmas Truce” (Sidney Weintraub)

Captain Frost was killed in action by a sniper on 28th March 1915, and the Memorial in Chester Cathedral commemorates him especially. Captain Frost was the last surviving officer of the 1st Battalion, Cheshire Regiment, who had been serving since Mons.

Thomas is also Commemorated on the Upton-by-Chester War Memorial.

Mentioned in Despatches: Captain T. L. Frost was one of  18 Officers and Other Ranks ‘mentioned’ in Field Marshall J.D.P. French’s Despatch of 15th January 1915: “In accordance with the last paragraph, of my Despatch of the 20th November, 1914, I have the honour to bring to notice names of those whom I recommend for gallant and distinguished service in the field.” (London Gazette Issue 29072 published on the 16th February 1915. Page 1662)

He too served with the Cheshire Regiment and No. 51 M.E. Commando. (A memorial window was placed in Chester Cathedral in their memory by Thomas’ father, John Meadows Frost snr.)

Captain Frost’s military service and where he is buried.

This entry was posted in Bedford House Cemetery. Bookmark the permalink.