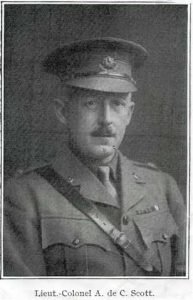 Personal:  Arthur was the eldest son of the late Major General (R.E.) Alexander de Courcy and Rosalind (née Dumbleton) Scott, later of  “Hawley” Parkstone, Dorset. He was born in 1866 in South Stoneham, Hampshire, and educated at Wellington School (Cumbermere House) from 1879 – 83 and then entered Sandhurst as a “Gentleman Cadet” before being commissioned in 1855 into the Cheshire Regiment.

In 1871 (Census RG 10/1160) Rosalind and the oldest children were living at De-la-Warr Villa, Northwood, Hampshire. (Father Alexander was presumably with the Regiment). Ten years later (1881 Census RG 11/1320) 15 year old Arthur was a boarding student at Sandhurst.

In 1901 he was serving with his Regiment in South Africa and the 1911 Census (RG 14/34980, pps. 8 and 13) sees Arthur, his wife, Phyllis and their two children enumerated with the 2nd Battalion, Cheshire Regiment, in Secunderabad, Andhra Pradesh, India

After Arthur’s death Phyllis re-married, firstly to Robert Charles Auber (Clerk in Holy Orders), on 14th September 1920, at Lilliput, Dorset, and after his death on 13th April 1930, she married Ernest Lloyd Armstrong, a couple of months later. 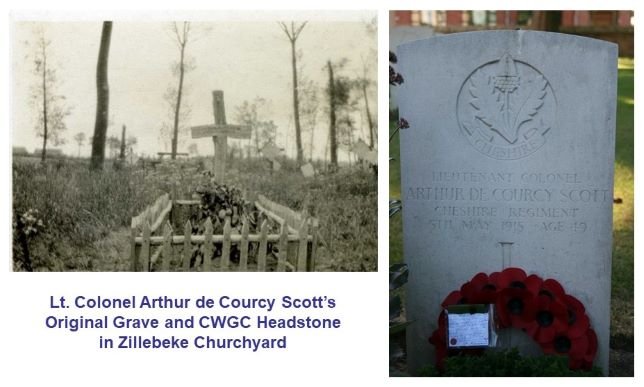 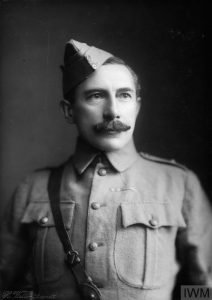 Military Service: After completing his education at Wellington College and Sandhurst, Arthur was commissioned into the Cheshire Regiment, as Lieutenant, on 2nd May 1885, promoted to Captain on 12th October 1994, and Major on 3rd November 1907.

An idea of the tardiness of Arthur’s promotion can be seen from a paragraph in “The Acorn” for January 1908 which reads ‘We offer our congratulations to Major Scott on his obtaining his majority after so long a wait. Twenty-two years is a long time to put in before obtaining the spurs which jingle like silver bells’.

As a 2nd Lieutenant Arthur first witnessed active service in the Burma operations of 1887-89, where ‘he saw much fighting‘. (He received the India General Service Medal with ‘Burma’ clasp – left) 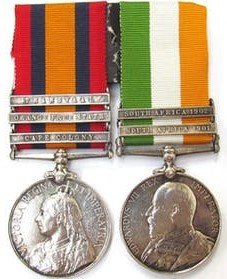 He was present at the engagements at Karee Siding, and the Vet and Zand Rivers, in addition to other operations in Cape Colony and the Transvaal. 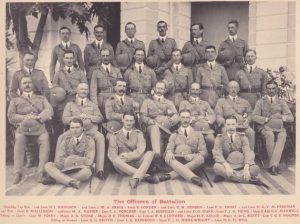 On the 20th September 1904 Arthur was one of the Officers of the 2nd Battalion who left from Government Sidings at Aldershot and began the move to India, sailing from Southampton on the HMS Soudan.

The Battalion was to replace the 1st Battalion which had been in India from 1893 and returned to Lichfield in November 1904.

In the photo of Officers (above) Arthur is seated, 2nd row back, second from the right.

this period in the Regimental History [N.B. ‘Grandad’ Pt. 7632 Ernest John Conway – the inspiration for this site – was also on the ship.]

At the outbreak of the Great War Arthur was a Major and 2nd in command of the 2nd Battalion stationed at Jubbulpore in India. On 19th October 1914 the 2nd Battalion was warned to hold itself in readiness to proceed to England on relief scale forming part of Force A, Expeditionary Force.

They left Jubbulpore on the 13th November 1914, picking up the Mhow detachment en route, and concentrated at Bombay on the 15th. Embarkation on HMT Braemar Castle followed on the 16th.

The Battalion disembarked at Plymouth on the 22nd December 1914 and went immediately to Winchester, receiving a draft of 158 men from the 3rd Special Reserve Battalion of the Regiment. They were put in to 84 Brigade ‘After a period of waiting’, says Col. Arthur Crookenden ‘not improved by the scrappy news of the severe handling their sister battalion had had at Mons, the battalion got to the front in France in the second week of 1915.‘.

The 1st Battalion was withdrawn to Frezenburg on the 4th May 1915. It was still very short of Officers and Lt. Col. A. de C. Scott, Capt. Savage and Lt. W. Mills were sent to join it from the 2nd Battalion.

Early on the morning of the 5th the Battalion was ordered forward to the support trenches facing Hill 60. When they got out into the open country around Zillebeke Lake they ran into a heavy shell barrage accompanied by clouds of gas. At this time the gas mask was a primitive affair consisting only of a piece of wadding held over the mouth by elastic bands.

On they went for about 2 miles, reaching Larch Wood near the railway cutting, in mid-morning. Here they joined a depleted Battalion of the Bedfordshire regiment, the enemy having now recaptured the hill. The Battalion was ordered to attack. Their attempt to take the hill failed, as did also attempts by the K.O.Y.L.I, and the K.O.S.B.

Arthur de Courcy Scott was killed on the 5th May. “We have seen how long and honourable was his service to the regiment and we can therefore appreciate the extent of his loss. He was a man of deep scholarship and charm, known to all ranks as ‘Brother’ Scott and loved by them.” [‘Ever Glorious’, Bernard Rigby] As well as the loss of the C.O., Capts. Woodyer and Savage and Lts. Pym and Clay were wounded. Maj. C.G.E. Hughes took over command of the Battalion.

A local (Chester) paper, under the heading “GASSED ON HILL 60” described the action surrounding Arthur’s death: “The 1st and 2nd Battalions were continuously fighting for five weeks in what has been described as ‘Hell’s own corner’. …. At Hill 60 they [the Germans] used their poisonous gases to such an extent that the Dorsets and West Ridings had to retire from the Hill. The Germans then took possession, and some of the trenches occupied by the Cheshires.

Very many of the 1st Battalion were poisoned and buried in one grave and O.C., Colonel Scott, died in the arms of the Regimental Sergeant Major J.W.T. Francis. So great was the wrath of the Cheshires, that they determined to make a counter-attack, which they did the following morning, May 7, about 3 a.m.

‘A’ Company, after desperate fighting, retook 70 yards of trenches. …. This Company lost many Officers and men.” [N.B. 6 other men of the 1st and 2nd Battalions were killed in action on the same day as Arthur. In the next 3 days the 2 Battalions had 129 men killed – 36 from 1st and 93 from the 2nd.]

In his last letter home C.S.M. 7724 John William Thomas Francis wrote that his C.O. (Col. Scott): “… had died in his arms the day previous to his own wound“. C.S.M. Francis was wounded the following day, and died of his wounds on 25th May 1915 in Hospital in Nottingham.

Read the newspaper article, mentioned above, which recounts (page 2) the circumstances of Lt.-Col. Scott’s death. 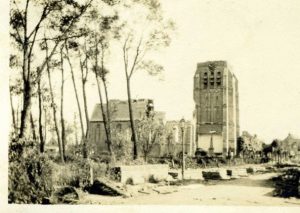 Unlike virtually all of the Battalion killed in the attack on Hill 60, who have no know grave and are commemorated on the Ypres (Menin Gate) Memorial, the body of Lieutenant Colonel Scott was recovered and taken back to Zillebeke Churchyard.

His CWGC headstone, which replaced the original marker (see above), bears the inscription “Jesus Put Forth his hand and touched him”.

The Battalion continued its advance and by 1.30 p.m. had driven the Germans back and were occupying the old support trenches.  When the fighting at Hill 60 ended, the combination of the shelling and the effect of the mines meant that little of the original hill remained.