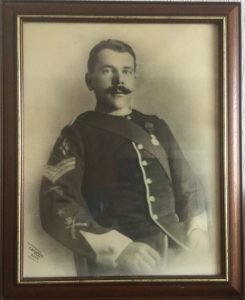 Personal: John was born in the December quarter 1887 in St Oswald’s, Chester, the son of William (a Miller) and Ellen (née Crook) Francis.

John was an accomplished sportsman. In Regimental athletics John had a fine record. He was a good footballer, and the champion middle-weight boxer of the Regiment. “In Ireland and in Chester he had figured in the boxing ring and was a smart performer with the gloves. A crack rifle shot, he was one of the shooting team that won the Henry Whitehead Cup, and his proficiency in marksmanship had done service in the field“. [‘Chester Chronicle, 27th May 1915]

John married Florence Hanley in Belfast in the March quarter 1912. After the War John’s Pension Records shows that Florence was then living at 27 St James’ Street, Chester, probably with John’s parents.

His last leave was in early December 1914 when he: “… came over to Chester on a few days’ leave at the beginning of December, and his family and friends were delighted to see him safe and sound after his hardships. He stayed at his parents’ home from Saturday night till Thursday night, then leaving to rejoin his regiment. He brought him with him his French decoration.” (see below) [‘Chester Chronicle, 27th May 1915] 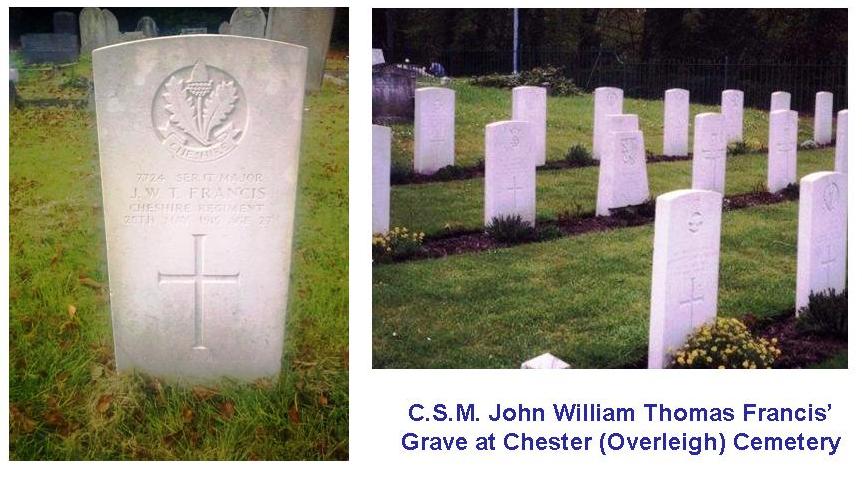 [N.B. His full dress portrait above shows him as a colour-sergeant, physical training and gymnastics instructor, a sergeant of the best shooting company, and holder of the distance judging qualification – quite a soldier! In 1914 the colour sergeants of infantry became either Company Sergeants Major or Company Quartermaster Sergeants.]

John was a Regular Soldier serving with the 1st Battalion and at the outbreak of War was stationed in Londonderry. He sailed on the SS Massilia on 14th August 1914 and his Medal Card confirms that he entered France at Le Havre on 16th August.

John fought under Captain J.L. Shore on the left flank of the Battalion’s action at Audregnies on 24th August.

The survivors of Audregnies were put into what remained of ‘B’ Company, under Captain Shore, and the now very depleted but still nominally 1st Battalion joined the remainder of 5 Division in retreat. As a result of this ‘reorganisation’ of the Battalion, the still determined strong spirits of the men, and the presence of the hard-working and much respected Shore, the retreat was an orderly one as far as the Battalion was concerned.

It was far too decimated a unit to take part in Smith-Dorrien’s stand at Le Cateau, and the 200 or so men left were put in reserve near Troisvilles. (‘Ever Glorious‘ – Bernard Rigby, Chapter 35)

A newspaper report of June 1915 describes what happened next: “At Le Cateau the Battalion was put in reserve, but seeing the tight corner two Regiments were in, two detachments of the Cheshires went out, the one under the late Captain Rich, the other under Company Sergt-Major J.W.T. Francis.

The former held a trench on the left, and the latter a small ridge on the right., and thus held up some hundreds of the enemy, while the Bedfords and the K.O.S. Borderers retired safely between them.” 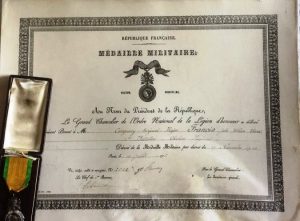 Not only was he Mentioned in Despatches, but he was also awarded for gallantry at Le Cateau the French Médaille Militaire.

The Battalion War Diary records that it was stationed in the: “Casemates in Ypres and École de Bien Faisance”. The next three days were spent “.. in Brigade Reserve”, but on 5th May it was: “Called out at 8.00 p.m. to move up to support the trenches, Hill 60, trenches 40, 43 & 45 occupied by the enemy. Arrived LARCH WOOD at RAILWAY CUTTING at about 10.20 a.m., drove some of the enemy from vicinity of Larch Wood and 41 and 42 support trenches.”

[N.B. ‘Casemates’ were the tunnels, passageways and rooms built into the ramparts and bastions by the French military engineer Sébastien Le Prestre, Seigneur de Vauban (1633-1707), during the French occupation in the 1680s, were used by French and British troops as shelters, accommodation, medical dressing stations and headquarters from October 1914.]

The Diary continued: “In the evening Bn. occupied trenches as follows: ‘A’ Company in LARCH WOOD, ‘B’ Coy. in trench 42, with one platoon in 40, ‘C’ Coy in 41 less one platoon in DUMP; ‘D’ Company with Bedfords and Norfolks. The K.O.S.B. [Kings Own Scottish Borderers] attacked Hill 60 but without success.”

The 1st Battalion was taking part in the “Battle of Hill 60“. In the first week of May 1915 the Battalion lost 41 men killed in action, including its C.O. Lt. Col. Arthur De Courcy SCOTT killed on the 5th and buried in Grave H.3., Zillebeke Churchyard.

The 1st Battalion had been very short of officers and Lt. Col. A. de C. Scott, Capt. Savage and Lt. W. Mills were sent to join it from the 2nd Battalion on the 4th May. As well as the loss of their C.O., “Capt. Woodyer; Capt. Savage; 2/Lieutenant Pym and Lieutenant May” were wounded. In his last letter home John wrote that his C.O. (Col. Scott): “… had died in his arms the day previous to his own wound“.

A local (Chester) paper, under the heading “GASSED ON HILL 60” described the action surrounding Arthur’s death: “The 1st and 2nd Battalions were continuously fighting for five weeks in what has been described as ‘Hell’s own corner’. …. At Hill 60 they [the Germans] used their poisonous gases to such an extent that the Dorsets and West Ridings had to retire from the Hill. The Germans then took possession, and some of the trenches occupied by the Cheshires.

Very many of the 1st Battalion were poisoned and buried in one grave and O.C., Colonel Scott, died in the arms of the Regimental Sergeant Major J.W.T. Francis. So great was the wrath of the Cheshires, that they determined to make a counter-attack, which they did the following morning, May 7, about 3 a.m.

‘A’ Company, after desperate fighting, retook 70 yards of trenches. …. This Company lost many Officers and men.

The Regimental Sergeant Major J.W.T. Francis was shot by a German sniper through the forehead, the bullet piercing just in front of the left ear.” 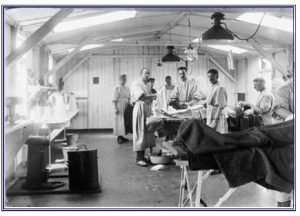 Although he knew he was mortally wounded, to save trouble to his family John (Tom) got a nurse to write and say he was wounded, but hoped to be in England soon and that he was going on well and not to worry. He wrote to his father saying ‘Well the Buffer’s got me at last – a German officer. I am shot through the brain, and well I knew about it, too, although I was operated on by the finest brain specialist, and I am going on A1.

I was left paralysed down my left side after the operation, but I am getting all the use back again. Thank God I have something to be thankful to Him for. We were retaking Hill 60 at 3 a.m. I had buried 102 chaps gassed previously, in one grave, and my poor Colonel died in my arms the day before, so it is comforting to be alive.

I am quite cheery and comfortable. I am not allowed to sit up. I was the fifth victim of the sniper. Four were killed outright in front of me. I was just on the point of releasing my revolver, but he was first, worst luck. The Major said ‘I am afraid I will lose you.‘ He nearly did so. At any rate I am A1, and when I get a little nearer convalescent will probably be sent to a Chester Hospital. I remain your ever loving son, Tom.‘ 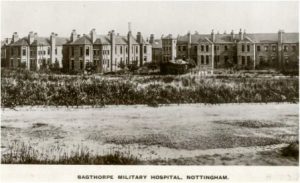 Sergeant Major Francis was transferred to Hospital in Wimereux, where he was operated on to remove the bullet. He lived long enough to be moved back to England to Bagthorpe Military Hospital, Nottingham, (picture left). There a relapse followed, and his wife received a telegram from the Hospital to say John was dangerously ill.

Though Florence left Chester at once for Nottingham, her husband had passed away at 4.15 on 25th May 1915, before her arrival at the Hospital.

The body was brought to Chester on Wednesday night, [26th May 1915] and the funeral will take place at Chester with military honours tomorrow (Saturday, 29th) afternoon. The cortege will leave the house in James Street at 1.30 for St. Martin’s Welsh Church, Nicholas Street, where the first part of the service will be conducted by the Rev. Parry Williams. The interment will take place at the cemetery, where the Rev. H. Grantham (Garrison Chaplain) will officiate.”

Read C.S.M. Francis’ full Obituary, as reported in ‘The Chester Chronicle’ on 29th May 1915

Read the newspaper article, mentioned above, which recounts John’s actions at Le Cateau and Hill 60 and the circumstances of his wounding and death.

(Sources: I am grateful to CSM Francis’ great grandson, Anthony, for the photos of John in full dress uniform and of his Médaille Militaire Medal and Certificate.)

This entry was posted in Chester (Overleigh) Cemetery. Bookmark the permalink.