Robert died in the June quarter 1886. In 1891 (Census RG 12/2797) Joseph, his older sister, Rose Ann, and younger brother, Robert Henry, were living in the home of their uncle and aunt, James and Elizabeth Anne Beard, at 16 Crowther Street, Stockport. Robert had at least 2 other younger brothers, Walter and John William [see Footnotes below].

Joseph was a professional soldier who had served 16 years with the Regiment. Following his death his official next of kin was his married sister, Mrs Kinsey, 38 Canal Street, Waterloo, Stockport, suggesting that by then both parents had died. 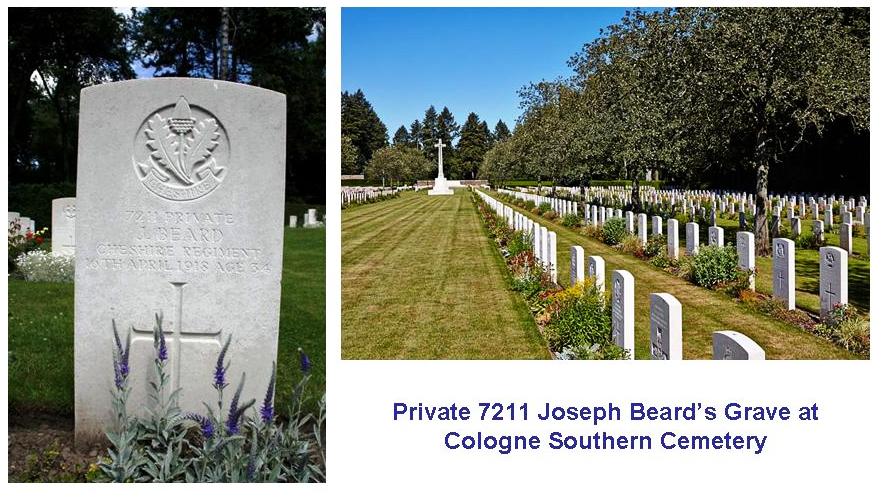 Military Service: Joseph enlisted in the Cheshire Regiment at Stockport. Currently his Army records are unavailable. However, his Service Number suggests he enlisted in August 1903, probably aged 18, on a 3 + 9 term of service (i.e. 3 years active service plus 9 years reserve), although the 1911 Census (see above) would dispute that.

His Medal Index Card shows that as a Regular Soldier he embarked with the Battalion at the outbreak of War and entered France on 16 August 1914. He was reported missing from the Battalion following the action at Audregnies on 24th August, where he fought on the right of the line under Captain Ernest Rae-Jones.

His official next of kin was his married sister, Mrs Kinsey, 38 Canal Street, Waterloo, Stockport, and, in July 1918, she received notification from the War Office of the circumstances of Joseph’s death as furnished by the German Government states: “The British prisoner of war, Joseph Beard, born on 21 July 1886, at Stockport, succumbed on 16 April to injuries received while making an attack on a sentry. Beard was engaged on the 15th at a work camp in unloading railway trucks. For some unexplained reason and notwithstanding repeated orders from the sentry, he refused to continue his work.

On the sentry proceeding to enforce his order with his rifle, the prisoner threatened him with his shovel. Being attacked for the third time, the sentry warded off the shovel at the same time striking Beard with the butt end of his rifle on the head, causing such wounds as resulted in the death of the deceased on the following day.”

The Stockport Advertiser, in its edition of 26th July 1918, comments “The above is, of course, the German official version of the unfortunate affair and cannot well be questioned. It seems strange, however, that Private Beard, who was always a quiet and gentlemanly soldier should meet such a fate after serving so long a term in the enemy’s hands.”

After the War, an official Committee on the Treatment of British Prisoners of War undertook a series of interviews and reports concerning over 7000 prisoners, but Joseph’s case was not one of them and the facts of the incident are now lost to history. 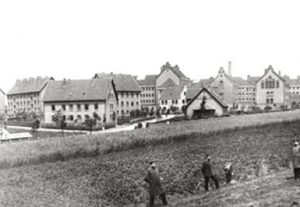 Joseph’s ‘Register of Soldiers Effects‘ entry states that he died in “Hos.: Bochum“, (probably St. Joseph’s Hospital, Bochum) so it is logical to assume that he was kept as a prisoner of war in Bochum jail (right), where he received the injuries described above.

He enlisted in August 1914, within days of war being declared and he entered France on 7th October 1914 and was probably one of the 248 reinforcements to the Battalion days before the action at Violaines.

He was a stretcher bearer and was killed when well behind the lines on 21st September 1916 and initially buried near to where he fell. His grave was subsequently lost and he is now commemorated on the Thiepval Memorial.

He originally joined the 3rd (Reserve) Battalion before entering France in March 1915 with the 6th Battalion. His time with the colours did not seem to have been too happy as he was under charge on numerous occasions mostly for being absent without leave or overstaying his leave periods.

He died of wounds on 2nd November 1917 whilst serving with the 6th Battalion and his place of burial, Lijssenthoek Military Cemetery, suggests being buried next to a military hospital facility (a Casualty Clearing Station). It cannot be known exactly when he was wounded, but soldiers did not spend long at a CCS.

This entry was posted in Cologne Southern Cemetery. Bookmark the permalink.