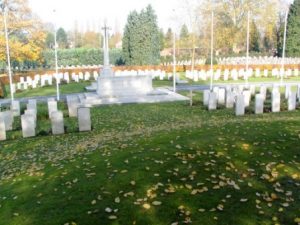 This cemetery contains 493 Commonwealth burials (329 from the UK, 157 from Canada, 4 Australians, 2 from New Zealand and 1 South African).

In addition there are 11 “Known Unto God“. There are also 101 burials of other nationalities, mostly Russians.

The town of Mons was taken by the Germans in August 1914 and was not retaken until literally the last day of the War, 11 November 1914, by the Canadian Corps.

The Cemetery contains 3 named soldiers of the Cheshire Regiment. The three men buried here were from ‘C’ and ‘D’ Companies of the 1st Battalion two of whom died of wounds and one who was reported missing after the Battle at Audregnies and subsequently died in German hands.

Personal: According to the SDGW records Ernest was born in January 1884 at Castle Hall, Stalybridge, Cheshire, the youngest child of John (Cotton spinner) and Anne Hadfield. The 1901 Census shows the family living in Illingworth Street, Stalybridge, when Ernest was employed as a “Ring spinner“. He had one older sister, Sarah Hannah. (1901 Census, RG 13/9795) 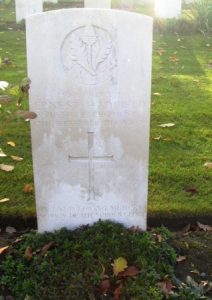 Military Service: Ernest enlisted in the Cheshire Regiment at Hyde, Cheshire on 28th April 1904, aged 19 years 3 months (although his date of birth – see above – would suggest he was a year older). Before this attestation he had been a member of the 4th (Territorial) Battalion. His original terms of service were 3 + 9 (i.e. 3 years active service + 9 years reserve).

He transferred to the Army Reserve after 3 years on 27th April 1907, and returned to live at 8 Illingworth Street, Stalybridge (his parents’ home).

Ernest’s time in the Regiment was not without some difficulties. He was charged with having a dirty rifle on 16th November 1905 (2 days CB) and a month later was absent from barracks (5 days CB). In November 1906 he was ‘dirty on parade‘ and ‘made an inappropriate reply to a NCO‘ – 10 days CB. Whilst in Madras he was admitted to hospital on 7th January 1907 and treated for “seabies” (a parasitic infection).

His Medal Index Card shows that as a reservist Ernest was recalled to the Regiment at the outbreak of War and entered France on 16th August 1914. He was not among those reported missing from the Battalion at Audregnies on 24th August, where he fought on the right of the line under Captain E.R. Jones.

Ernest’s service papers state he died of wounds at “Manners English Hospital, Mons” on 17th September 1914 and as Mons was in German hands undoubtedly he was a prisoner of war at the time. In all he served a period of 10 years 143 days with the Regiment.

His father, mother, brothers and sisters all emigrated to Ohio, USA, in 1912. His three brothers enlisted after his death and all survived. 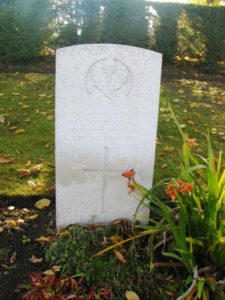 Military Service: Harry enlisted in the Cheshire Regiment at Stockport, Cheshire. Currently his Army records are unavailable and do not seem to have survived the World War 2 bombing.

As Company Sergeant Major of ‘D’ Company he was a serving soldier at the time, not a Reservist.

His Medal Index Card shows that he entered France on the 16th August 1914 with the rest of the Battalion. He was among those reported missing from the Battalion after the Battalion at Audregnies on 24th August

He died of wounds on 11th October 1914, quite possibly in the “Manners English Hospital” and as Mons was in German hands undoubtedly he was a prisoner of war at the time.

(Harry’s ‘D’ Company had been in action on the right of the line at Audregnies and Harry lost his CO, Captain E.R. Jones, in the action.)

Personal: According to his enlistment records Harry was born in Edmonton, London in February/March 1886. He was the son of George and Elizabeth Smith, of Tottenham.

James married Ellen Emily Robinson in the December quarter 1909. After James’ death, with effect from 19th April 1915, she received a pension of 10/- (50p) for herself only, confirming they had no children. Less than a year after James’ death Ellen re-married Charles P. Dunt and they lived at 17 Dawlish Rd., Bruce Grove, Tottenham, London. 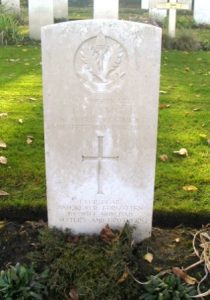 Military Service: James enlisted in the Cheshire Regiment at Stratford, Essex on 13th April 1904 aged 18 years 1 month on a 3+9 term of service (i.e. 3 years active service plus 9 years reserve). Prior to joining the Cheshires he had served for 7 months with the 5th Battalion, The Royal Fusiliers.

After an initial spell at Depot he joined the 2nd Battalion on the 20th May, transferring to the 1st Battalion in Lichfield on the 12th November 1904, moving to Bulford on 1st January 1906. Accordingly, on 12th April 1907, when his 3 years ‘Active’ Service was up, James was transferred to the Reserve List, and went to live at 14 Gilpin Grove, Edmonton, London.

His time in the Service was not without difficulties. On 10th March 1905 he was ‘confined to barracks‘ (CB) for 8 days for ‘insolence to an NCO‘, but just 2 days later received a further 8 days CB for ‘breaking out of barracks‘ and ‘being absent from defaulters roll call‘. On 8th June he was ‘improperly dressed in town‘ (8 days) and in 1906 – ‘not attempting to double when ordered and insolence to an Officer‘ (14 days CB); 13th February, ‘using obscene language to NCO‘ and ‘attempting to strike a NCO‘ (15 days “Imprisonment with Hard Labour” – IHL).

On 3rd October 1906 he was admonished for causing a disturbance whilst drunk and on 13th November 1906 he ‘attempted to strike a superior officer‘ and was imprisoned for 35 days, and on 4th December 1907 gave a ‘false answer on attestation‘.

This final ‘crime’ was to try to falsely rejoin the Army using an assumed name. His Service Records state that he tried to enlist at Stratford under the name of “Alfred James Potts” and it was for this that the Civil Court in West Ham tried and convicted him to 14 days IHL. In addition he spent 20, 10 and 15 day periods in Hospital in July, September and December 1906 for 2 bouts of gonorrhoea and one of syphilis. It is perhaps not surprising that on his transfer to the Reserve his conduct was described as “Indifferent and guilty of frequent acts of insubordination‘!

James’ Medal Index Card shows that as a Reservist he was recalled to the Battalion and entered France on 16th August 1914. He was not among those reported missing from the Battalion after the action at Audregnies on 24th August, but died of wounds on 26th September 1914 and as Mons was in German hands undoubtedly he was a prisoner of war at the time. During the action his ‘C’ Company fought on the right of the line under Captain W.E.L.R. Dugmore.

His wife received a letter from the War Office on 15th October 1914 stating that James was in a “Civil Hospital” at Mons, but did not say that he was wounded. She wrote back asking for more details and how she could write to him.

It took until 15th June 1915 before she was advised that her husband had died in the town of Mons at 9.30 p.m. in the “Rue du Petit ??? Ondart” – which is strange being not a named Hospital. However, the “Register of Soldiers’ Effects” states that he died in Hospital at “Arnsberg“. Prisoner of War records confirm this.