Officers, N.C.O.s and Men of the 1st Battalion, Buried in Wulvergem Churchyard Cemetery 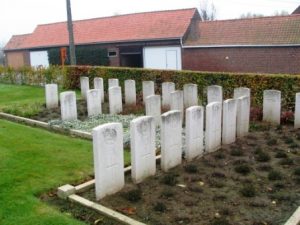 The churchyard contains 38 Commonwealth burials and commemorations of the First World War. All seem to be from the later part of 1914 and early 1915 and from a variety of British Regiments.

Six of the burials are unidentified and 23 graves destroyed by shell fire are now represented by special memorials.

Wulvergem Church was destroyed by shellfire and rebuilt in its present form in 1925. 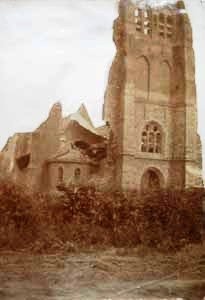 The one soldier of the Cheshire Regiment buried here belonged to the 1/6 Battalion which took part in the now famous “Christmas Truce” and maybe even the football match in the Wulvergem area.

Two survivors of the 6th Cheshires, Private Ernie Williams and C.S.M. (later Lt. Col.) Frank Naden, both claimed in interviews to the TV and the press that had taken part in one such truce and kick-about in Wulvergem.

…  the Christmas Truce and the stories of these two soldiers

Joseph had four older siblings, Elizabeth, William, Ethelfrida and Sarah. In 1901 the family were living at 6 Castle Square, Albert Road, Oswestry. (1901 Census RG 13/2545) Another son was born to the family, Oswald Aloysius, in 1902, but Joseph’s father, Edward, died in the June quarter 1903. 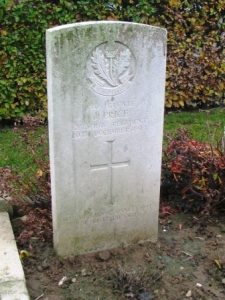 Military Service: Currently his Army records are unavailable, all that is known is that Joseph enlisted at Stockport, Cheshire.

He was a pre-war member of the 1/6th (Territorial) Battalion and was mobilised on 4th August 1914 part of the Cheshire Brigade, Welsh Division. On 10th November 1914 they left the Division and landed in France and on the 17th December 1914 were attached to 15th Brigade, 5th Division, alongside the 1st Battalion.

On the 11th it commenced duty in the Wulverghem sector. On 20th December, Joseph’s company was one of two in the front line trench when he was killed, probably by shellfire.

The 1st Battalion War Diary for 18th December 1914 shows ‘A’ and ‘C’ Companies in trenches at ‘Wulvergham‘ (sic), with ‘B’ and ‘D’ Companies ‘in billets‘. The Diary also notes: “Party of 6th Bn. Cheshire Regt. (Territorials) accompanied Bn. in Trenches“.

The following two days, 19th and 20th, the 1st Battalions Companies exchanged places in the trenches and billets. The Diary notes on the 21st “3 men wounded“.

Joseph was buried just behind their position in the village churchyard. The church and its graveyard were badly damaged by shelling during the war and 23 graves, including Joseph’s, were destroyed. He is now commemorated on a special memorial in the graveyard.