Officers, N.C.O.s and Men of the 1st Battalion, Buried in Kandahar Farm Cemetery 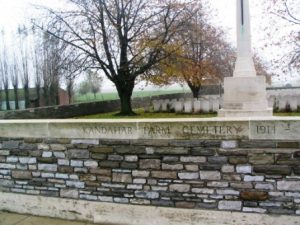 The Commonwealth troops held this sector and therefore used the Cemetery up to April 1918, when it fell under German control, but was recovered in early September 1918 and used again.

Two men of the original 1st Battalion Cheshire Regiment are buried in this Cemetery. Use the links below to read a little more about each man and see where he is buried.

In 1891 he was living his mother and younger brother, Douglas, at the home of his grandfather, John Wenman Warwick Green, a retired Royal Naval Officer (Fleet Paymaster), at 49 Kingston Crescent, Portsea, Portsmouth. (1891 Census RG 12/855).

In 1900 a third brother, Arthur L., was born when the family were in Linlithgow, Scotland. In 1901 the family was living at 7 Viewforth Terrace, Aberdour, Fife, Scotland. (CSSCT1901_129) There is no record of Huntly marrying.

In 1911 (Census RG 14/2602) Robert, Beatrice and their youngest son, Arthur, were living at 5 The Terrace, Royal Victoria Victualling Yard, Deptford, S. E.London. Huntly appears on the 1911 Census of Ireland as one of the “Residents of a house 6.2 in Henry Place (Dock Ward, Antrim)“. It is believed that this was attached to The Curragh Military Camp, predominantly to treat STDs. 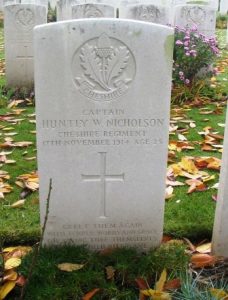 Military Service: Currently his Army records are unavailable. Huntly’s Medal Index Card shows that he entered France as part of the BEF on 13th November 1914 and was killed in action on the 17th November 1914.

On that day the 1st Battalion was in trenches at Ypres and the War Diary records: “Battalion in trenches, started with exceptionally heavy shell fire followed by an infantry attack which however was easily repulsed.”

It seems that Huntly was recalled from the Cheshire Regiment Reserve of Officers and posted to the 2nd Manchesters at the time.

He is not named among the Cheshire’s complement of Officers in the draft leaving for the front in August 1914. Neither does his name appear in the Regimental War Diary, either joining as a replacement or named as a casualty. 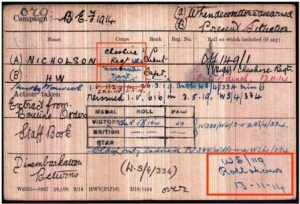 In the various literatures associated with the 1st Battalion at this time he is not named as a casualty and is not named by Crookenden, the front page of his Medal Index Card (left) shows attachments to both Regiments, upper centre red boxes, and also, in the lower right corner, the date of his disembarkation – “13-11-14“.

On the back page there is a notation that the Record Office at Preston had forwarded a list of Officers of the 2nd Manchester Regiment eligible for the 1914 Star.

It would seem that Huntly was nominally in the 1st Battalion, but attached to the 3rd. On 15th November 1914 he is recorded in the War Diary of the 2nd Battalion, Manchester Regiment, as joining that Battalion. He was killed in action 2 days later.

In the 2nd Battalion (Manchester Regiment) War Diary for the 15th of November 1914 it says that: “Lieut H Nicholson joined.” This was two days before he died and the day he was promoted to Captain, so that accounts for any misunderstanding in his rank. But it does show that he was attached to the 2nd Battalion, Manchesters, and was fighting with them when he died.

All other Records clearly associate Huntly with the 1st Battalion, Cheshire Regiment. It seems that in total he spent just 4 days in France before being killed in action.

Personal: Alfred was born in Birkenhead, Cheshire in the September quarter 1874, the eldest son of Henry (Tailor) and Catherine McDermott, of Burnley. He had four younger siblings John, Catherine, Albert and Annie (1881 Census, RG 11/4154) In 1881 he was employed as an Iron Moulder. 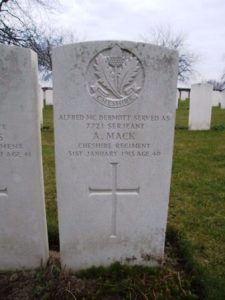 However, from his enlistment date and in comparison to others, he would probably have enlisted in the 3rd (Reserve) Battalion in June 1907. Probably he transferred to the 1st Battalion at the end or during this service.

Alfred was Reservist and was recalled to the 1st Battalion at the outbreak of War. His Medal Card confirms that he entered France on 16th August 1914.

He would have fought on the right of the line at Audregnies on 24th August 1914 under Captains E. R. Jones and W. S. Rich and survived the subsequent fighting at La Bassée and Ypres.

In the second half of January 1915 the 1st Battalion were in ‘Reserve’ at Bailleul, moving up to the trenches at Wulverghen on the 24th. They were relieved by 1st Norfolks on the 26th, only to return to the trenches at Lindenhoek on the 30th, relieving the 1st Dorsets.

Alfred was killed in action the following day, 31st January 1915. Unusually, for an NCO or OR (‘Other Ranks’) his name was recorded in the War Diary. The entry reads:

“Sergt. Mack killed in action. This NCO had been previously wounded. He was a gallant soldier. Just previous to being killed had patrolled to enemy’s trenches.”