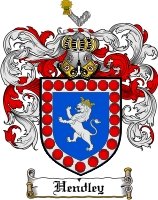 Strictly speaking the only relationship between Grandad, Ernest John Conway, and the Hendley family is by marriage, in that his son, Ernest Conway (my father), married my mother, Doris Hendley on 25th July 1936.

In their wedding photo (left), my father, Ernest, stands with his best man, his brother, Cyril Conway.

My other grandfather, William Hendley, is standing next to the bride.

Research is still going on, but now (2020) the following family members, bearing the Hendley name, have served their country in times of War: 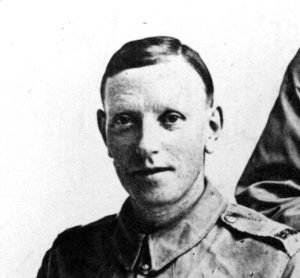 My maternal grandfather (Grandpa Hendley) was born on 31st January 1878. He married Frances Wilkes on Christmas Day 1900, but my mother, Doris Hendley, was not born until 14th May 1914.

An older daughter, Hilda May, was 3 when she died in 1912. My mother, therefore, grew up as an only child.

Grandpa was 37 years old when he enlisted in the Lincolnshire Regiment on 17th February 1912. Perhaps unsurprisingly he was posted to a non-combat unit. The 1st Garrison Battalion was formed in September 1915. The next month it moved to India and remained there, under command of the Presidency Brigade in 8th (Indian) Division.

Grandpa’s Service, however, was short lived and he was discharged on 2nd April 1916, as indicated by his Medal Index Card (right).

The family is in possession of his medals – the British War Medal and Victory Medal, as well as ‘souvenirs‘ he brought back for the family.

One of the souvenirs was a War Office Map of India, with the town of Allahabad circled – always assumed to be where he was stationed.

A larger photo of the one above is stamped with the name of the photographer and “Allahabad“.

Just 6 months after my parents married, Grandma Hendley died (31st January 1937). Grandpa moved in with them in their new home in Rutland Street, Derby, where he died on 6th July 1953. They now rest together in Grave 49055 Nottingham Road Cemetery, Derby.

Great uncle Joseph was even older than Grandpa Hendley when he enlisted in the Royal Field Artillery. He was born in Derby on 7th February 1875, so was probably over 40 years old when he was posted to the 288th Brigade. In 1894 Joseph married Nellie Carter, and in the next 20 years they had 3 sons and 5 daughters.

His Unit was also the  4th North Midland Brigade, sometimes known as the ‘Derbyshire Howitzers‘, was a part-time unit of Britain’s Royal Field Artillery created in 1908 as part of the Territorial Force.

The order to mobilise was received on 4th August 1914. Shortly afterwards, the men were invited to volunteer for overseas service.

The new brigade established its headquarters (HQ) at 91 Siddals Road in Derby, which it shared with C and D Squadrons of the Derbyshire Imperial Yeomanry, very close to where his future in laws lived.

The North Midland Division began embarking for France on 25th February 1915, and by 8th March had completed its concentration at Ploegsteert in Belgium – the first complete Territorial Force Division to deploy to the Western Front with the British Expeditionary Force (BEF). 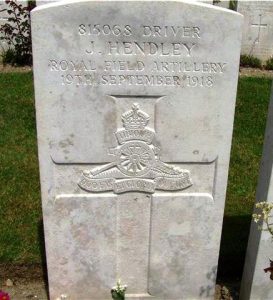 It is not known where he received the wounds from which he died on 19th September 1918.

It is possible that it happened during the Battle of Épehy, the previous day. Joseph is buried in Grave I.D.4., Brie British Cemetery.

His widow, Nellie, continued to live in Derby until her death in 1941.