Officers, N.C.O.s and Men of the 1st Battalion, Buried in Tyne Cot Cemetery 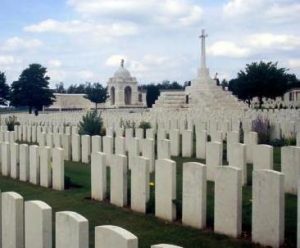 This cemetery is now the largest Commonwealth war cemetery in the world, in terms of burials.

At the suggestion of King George V, who visited the cemetery in 1922, the Cross of Sacrifice was placed on top of the original large blockhouse which helped give the cemetery its name – shown in picture above right.

The cemetery was greatly enlarged after the Armistice, when burials were brought in from the battlefields surrounding Passchendaele and Langemarck, and from a few small burial grounds.

At the rear of the cemetery is the Tyne Cot Memorial, it commemorates almost 35,000 servicemen from the UK and New Zealand who fought in the Ypres Salient after 16th August 1917, and whose graves are not known.

The Cemetery contains 1 soldier of original 1st Battalion of the Cheshire Regiment, who died in 1915.

Ronald’s father, Walter, died in the June quarter 1901 and Maud re-married in 1905/6 to John William Marchant. (1911 Census RG 14/26718) That Census shows the family living at 110 Carrington Street, Bradford, Yorshire. 16 year old Ronald was employed as an “Assistant Litho Printer“. After the War the family had moved to 242 Jesmond Terrace, Wyke Lane, Wyke, Bradford. 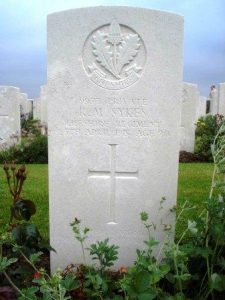 Military Service: Ronald enlisted into the 1st Battalion, probably for a period of six years, at Birkenhead, Cheshire. Currently his Army records are unavailable, destroyed by World War 2 bombing. However, his Service Number suggests he enlisted in late 1913 / early 1914. He had recently finished his initial training before joining the Battalion in Londonderry.

His Medal Index Card shows that as a regular soldier Ronald moved with the Battalion at the outbreak of War and entered France on 16th August 1914. He fought on the right of the line at Audregnies under Captain W.E.L.R. Dugmore and also survived the actions at La Bassée and Nonne Bosschen (First Ypres).

As Ronald died of wounds it is not possible to be specific as to where and when he received them. However, the “Register of Soldiers’ Effects” gives his place of death as “Zonnebeke“.

On the day Ronald died the Battalion War Diary records: “Relieved by Bedfordshire Regiment and moved into Brigade Reserve in Dugouts under W bank of Zillebeke Lake.”. There are no records on any casualties.

It is possible that Ronald was one of the “… few casualties” caused by shelling on the 23rd April, and subsequently died from his wounds. Tyne Cot Cemetery is, of course, located at Zonnebeke.