Officers, N.C.O.s and Men of the 1st Battalion, Buried in Étaples Military Cemetery 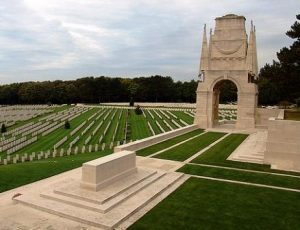 The Étaples area was the scene of many reinforcement camps and hospitals, as it was far from the battlefields yet still accessible by railway from both the northern or the southern battlefields.

In the immediate vicinity were 11 general, one stationary, four Red Cross hospitals and a convalescent depot, could deal with 22,000 wounded or sick. Some of these facilities remained for long after the Armistice.

The Cemetery contains 1 soldier of the original 1st Battalion of the Cheshire Regiment, who died in 1916.

…. use this link to see more photos of Étaples Military Cemetery

Robert also had 3 half-brothers from his father’s first marriage to Bridget’s sister, Mary Cronin, who died in 1885. These were Richard Joseph, Christopher John and Henry Edward.

Personal: Robert enlisted in the Cheshire Regiment at Hyde, Cheshire. Currently his Army records are unavailable, destroyed in Second World War bombing. His Service Number would suggest an enlistment date in late 1912.

He was a Regular Soldier serving with the 1st Battalion at the outbreak of War and his Medal Card confirms that he entered France on 16th August 1914.

He would have fought on the left of the line at Audregnies on 24th August 1914 under Captain A.J.L. Dyer, and survived the subsequent fighting at La Bassée and Ypres.

As he died of wounds it is difficult to say precisely where those wounds were received. If they were recent the most likely action would have been the fighting near the village of Guillemont. The attack started at 9.0 a.m. on 3rd September 1916 and immediately faltered as there had been insufficient artillery support and the Cheshires were ordered forward to reinforce 13th Brigade.

From their reserve position to the front line, they had to cross sloping ground in full view of the enemy and under heavy shell fire. On arrival at the front line, it was found that the trench was crowded with men from the attacking Battalions who had been forced to pull back. Gradually 13th Brigade was able to be withdrawn and the Cheshires took over the line, still under attack from artillery fire. Guillemont had been captured by the main force, but Falfemont Farm remained in enemy hands.

At noon on the 4th, orders were issued for another attack on the Farm. This was scheduled for 3.00 p.m. The attack would be undertaken by the Norfolks on the right, the Bedfords on the left and “A” and “C” Companies of the Cheshires in the centre.
The Regimental History records that “The attack by the Norfolks and “A” Company failed, owing to heavy machine gun fire. Capt Francis White, of “A” Company, was killed with many of his men as they left our trenches.”

Official records report that 20 were killed on the 4th and 43 on the 5th. It is probable that at some point in those three days, Robert was fatally wounded and died in hospital on 9th September.

N.B. From the Official History of the Great War:

‘The 15th Brigade accordingly prepared for another frontal attack on Falfemont Farm, the 1/Norfolk being now in actual touch with French troops. The latter, however, did not advance at 3.5 p.m. when the Norfolk left their trenches only to be checked by machine gun fire from Combles ravine.

On the left, a party which entered the south west corner of the  farm was bombed out again; but a company of the 1/Cheshire worked round under the shelter of the spur, whilst the 1/Bedforedshire, starting from Wedge Wood, began to bomb south-eastward along the German trench. The Bedfordshire gathered in over 130 prisoners, mostly 164th Regiment, together with several machine guns, and by 4 p.m. the northern and western corners of the farm enclosure were taken. Reinforced by the 16/R. Warwickshire, the Norfolk, who had been working forward from shell-hole to shell-hole, made another unsuccessful attempt to storm the farm at 5.30 p.m., so it was then decided that the 16/R. Warwickshire should sap forward towards the objective during the night. Patrols of the Bedfordshire and Cheshire on the crest of Leuze Wood spur had assisted to prevent the approach of German reinforcements, which were also caught by British artillery fire as they advanced from the direction of Combles.’