Like many Military records from the First World War, these have been severely damaged by enemy action during the Second World War.  They are now part of the Burnt Series papers and are held in the WO363 classification at the National Archive. Even though there is little left, it is still possible to make out the essential details. 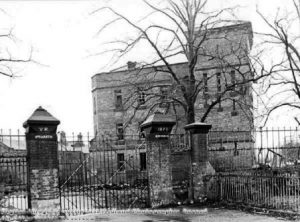 Ernest John joined the Cheshire Regiment on 11th July 1904 at Normanton Barracks, Derby (right), aged 18 years, 3 months.  At the time he was living in the Parish of Normanton, Derby.

It seems he had formerly been a member of the Volunteer Battalion, Notts and Derbyshire Regiment, which is logical as they were based at Normanton Barracks and are the town’s main regimental affiliation.

Quite why he joined the Cheshires as opposed to a full-time Battalion of the Notts and Derbys is not clear, although the 2nd Battalion were due to be posted to India, where his grandfather and great-grandfather had both served, so this could have been an incentive – who knows!

At some time in 1904 he set sail for India where he served until his discharge from the Regiment at the end of his three years of Active Service in July 1907.

For the next 9 years, however, he was a Reservist, contracted to attend a month’s training every year. It was as a Reservist that Grandad was recalled to the 1st Battalion on 5th August 1914, ready to embark with the British Expeditionary Force to France.

this period of Grandad’s service

The papers from the National Archive yielded just 2 damaged sheets and a few other scraps, which did at least reveal the salient dates of his enlistment and re-call to the Colours. (shown below) 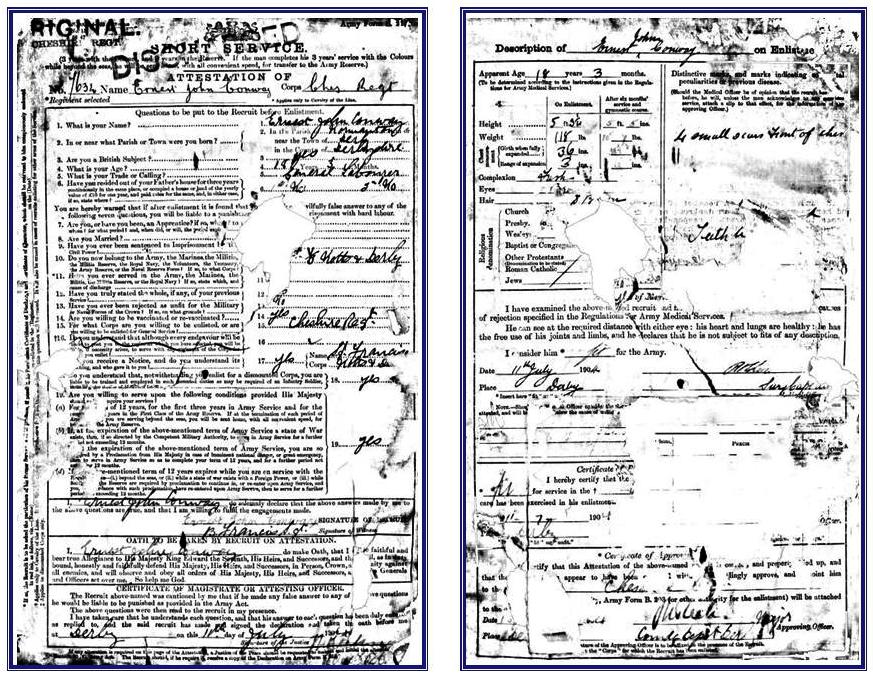 Grandad landed in France on the 16th August 1914 and 8 days later was in action at Audregnies, where he was lucky to survive as most of the Battalion was killed, wounded or captured.

After further actions at Le Cateau and the Aisne, he went into action again at Violaines, near La Bassée, on 22nd October, where he was wounded – according to my father (his son) – being shot in the upper chest.  This ultimately resulted in a ‘Blighty‘, a wound bad enough to force his return home and not return to the battlefields of France. (He died in 1949 with the bullet still lodged near his spine.) 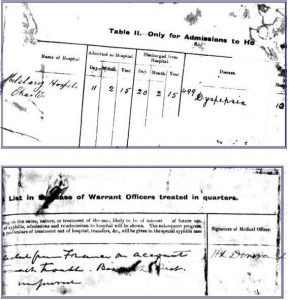 Grandad recovered from his wounds to a degree, but had to be admitted to Hospital in Chester for 10 days in February 1915, suffering from “dyspepsia“.

Whilst these days that would not be considered a major issue, in 1915 it warranted a lengthy Hospital stay.

The extract on the right is taken from one of the few surviving scraps of Grandad’s Military records. It was seem at this stage (February 1915) the War Office was looking for any wounded fit to return to the Front.

Another surviving extract, from the page above are his Hospital details, and appears to state that he is “.. excluded from France on account of his stomach trouble“, and also that a “Bismuth diet” had been prescribed. (Bismuth subsalicylate was used as an antidiarrheal and to treat some other gastro-intestinal diseases.) 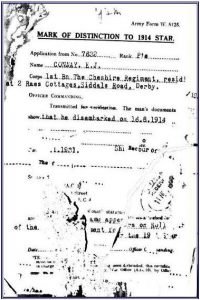 The only other page from Grandad’s Service Record is his application for the “Mons Star” – the 1914 Star awarded only to those men who saw action with the British Expeditionary Force in France or Belgium between 4 August and 22 November 1914.

As well as the Medal itself these men also received the ‘1914 Star Clasp‘ to be attached to the Medal, and if only the Medal Bar was worn the clasp equivalent was in the form of a rosette.

As a result the 1914 Star is often referred to as being issued: “With Clasps and Roses“.

Grandad’s Medals and Bars are shown below. In addition to the 1914 Star, he also received the British War Medal and the Victory Medal. 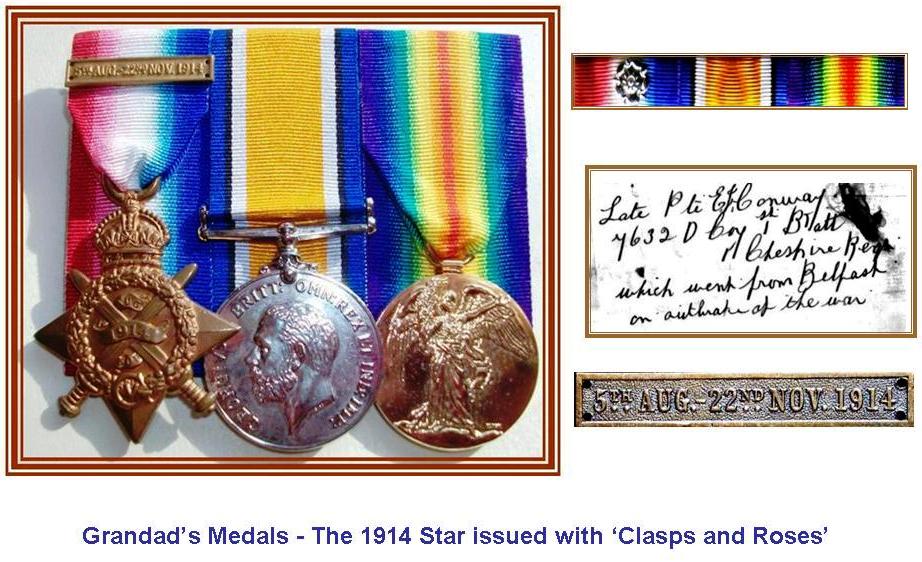