In keeping with all other Regimental Battalions, my grandfather’s Battalion – the 1st Battalion, Cheshire Regiment – began a Regimental War Diary on the outbreak of hostilities on 4th August 1914. The Diary was written up daily, usually by the C.O., to record the Battalion’s activities that day.

You can read a transcription of each month’s diary by clicking the links below. From there you will be able to move on to look at daily casualties and read more about each of the men who gave their lives in these first few months of the War.

Some entries are, by necessity, brief – “… day spent in trenches ..“, whereas others record the progress and outcome of a major battle. 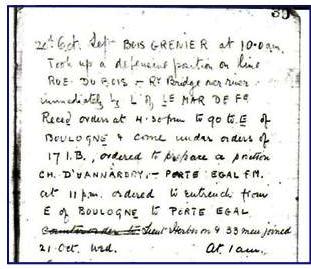 The original diary came in various forms, sometimes scribbled, pencil notes in a standard notebook, others were clearly typed up, probably later when there was more time.

The names of Officers are frequently mentioned, NCOs and men of the ‘other ranks‘ are much less likely to be named unless they did something outstanding.

Casualties, killed, wounded and missing are often numbered each day, but again only the Officers tended to be named. 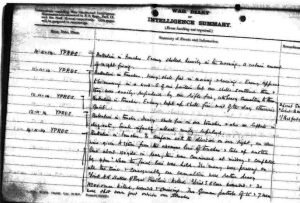 However, by incorporating the details in the Diary with Casualty Records on the Commonwealth War Graves lists it is often possible to work out which men are referred to in the casualty role in the Diary.

The example on the right is from the hand-written transcript of the 1st Battalion’s Diary for the period 10th – 14th November 1914, when in action during the First Battle of Ypres.

Transcripts of the 1st Battalion’s Diaries for the first 5 months of the Great War are on the following pages:

The original diaries are kept at National Archives in Kew, in the category WO95. Sections of some other Regimental Diaries have been transposed.

a full copy of the Battalion’s War Diary between August and December 1914 (.pdf file)