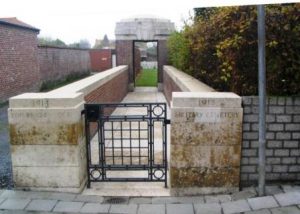 The Cemetery contains 2 named soldiers of the Cheshire Regiment who both died of wounds.

The town of Poperinge was in the hands of the British for most of the war. Although it was fairly close to Ypres, it was just out of range of almost all enemy guns. It became a base for Casualty Clearing Stations and it was there that these two men died, probably of wounds received during the First Battle of Ypres.

Click the links below to learn more about the 2 named soldiers of the 1st Battalion, Cheshire Regiment, buried here.

Personal: Herbert was born at 46 Cathcart Street, Seacombe, Cheshire, in June 1879 (baptised on 15th). He was the son of Robert (Marine Engineer) and Alice (née Finley) Barnes and had three older siblings, Alice, Edward and Ernest (see Footnote below), and a younger sister, Maud. (1881 Census RG 11/3579)

On 13th September 1913 at St George the Martyr Church, Abbey Hey, Lancashire, Herbert married Cabella Phythian. They had a son, Edward, born in the June quarter 1913. [N.B. Cabella’s father’s name was recorded on the Marriage Certificate as Thomas Wootton (deceased). Another boy, Robert H. Barnes, was born in the June quarter 1914 with mother’s maiden name ‘Wootton‘.) 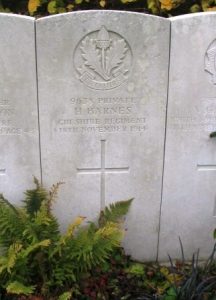 Military Service: Currently his Army records are unavailable, destroyed in Second World War bombing; all that is known is that Herbert enlisted at Chester.

His Medal Index Card is also unavailable and he does not appear on the list of the original 1st Battalion who arrived in France on 16th August so he had probably arrived with one of the contingents of reinforcements in September and October.

The Battalion took up its position in the trenches at Ypres on 4th November 1914 and between then and moving into reserve dugouts on the 20th they had 35 killed and 99 wounded.

It is most likely that Herbert was one of them and died at No 4 Clearing Hospital, in operation in Poperinghe from 31st October to 1st December 1914.

He had formerly served as Pte. 48698, Lancashire Fusiliers and was the husband of Bertha Barnes, of West End Council School House, Moss Street, Ashton-under-Lyne. He is buried in Grave I.A.7., Le Grand Beaumart British Cemetery, Steenwerck.

Personal: Luke was born in St Mary’s Parish, Stockport, Cheshire, in June/July 1886, the youngest child of John Thomas and Mary Jane [Minnie] (née Jones) Hopwood. His elder siblings were Bertha, Annie and Clara and in 1901 the family were living at 64 Swan Street, Stockport, Cheshire.(1901 Census: RG 13/3298)

In the December quarter 1924 Eliza remarried John Swindells and they lived at 51 Borron Street, Portwood, Stockport. The 1939 Register shows them living at 98 Ladysmith Street, Stockport. 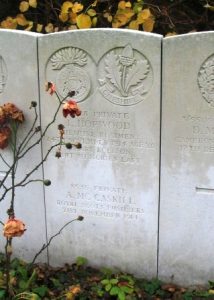 Military Service: Luke enlisted at Stockport, Cheshire, aged 18 years 0 months, on 12th July 1904, after initially being in the 4th Battalion. His terms of service were 3 + 9 (i.e. 3 years active service + 9 years reserve), and was transferred to the Army Reserve list on 10th July 1907.

His time in the service was not without its problems. On 20th October 1904 he broke out of barracks and was found drunk and disorderly and using abusive language, for which he received 10 days CB (confined to barracks). He broke out again on 12th August 1905 and on 24th June 1906 he was found to be “Drunk in a company hut” and ‘admonished‘. Two months later, on 16th August he was absent from drill and received 14 days and again on 2nd March 1907 he broke out of barracks and was absent for 7 hours, receiving 8 days CB. On 4th March 1907, in the company of ‘Richard Clare‘, he was convicted of stealing a currant loaf to the value of 2½ d. from the Co-op Society Ltd. He was fined 15/- (£0.75) and sentenced to 15 days hard labour.

As a Reservist he was recalled to the 1st Battalion at the outbreak of War and his Medal Card shows he entered France 16th August 1914. During the Battle of Audregnies on 24th August his Company fought on the right of the line, under Captain W.E.L.R. Dugmore.  In October 1914 he would also have been in action at Violaines and La Bassée.

Luke died from wounds received in action on 24th November 1914 at No. 4 Clearing Hospital, Poperinghe. (List No. 8111) and was buried in the New Cemetery there.

The Battalion took up its position in the trenches at Ypres on 4th November 1914 and between then and moving into reserve dugouts on the 20th they had 35 killed and 99 wounded. It is most likely that Luke was one of them.