Officers, N.C.O.s and Men of the 1st Battalion, Buried in Auberchicourt British Cemetery 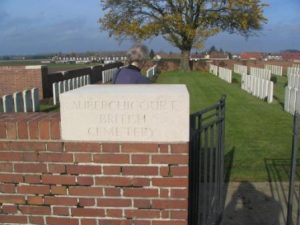 In 1918 the village of Aubercicourt was occupied by Commonwealth troops and a Canadian Casualty Clearing Station was established, which would account for many of the burials being of Canadian soldiers who died in 1918 and many, of wounds received, in 1919.

The Cemetery contains just 4 soldiers from 1914, including 1 soldier of the Cheshire Regiment, who were reburied here from the surrounding area after the War. All of them were killed in action on 24th August 1914

According to his Service papers Frederick did not marry.  At the time of his death his parents and brothers and sisters were listed as next-of-kin. His father took possession of his war medals. 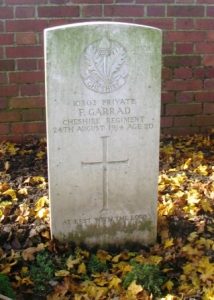 Military History:   Frederick enlisted at Warley, Essex. on 28th February 1912, aged 17 years 1 month. Initially he joined as Cyclist 1820 in the 6th (Cyclist) Battalion, the Suffolk Regiment, a Territorial Battalion, but on 9th January 1913 he transferred to the 3rd Battalion the Essex Regiment, a Reserve Battalion, becoming Private 956.

After a further 90 days training with the Special Reserve he joined the Regular Army on 9th April 1913, moving from Private 10173, Essex Regiment to Private 10303 Cheshire Regiment. After further training the new recruit was assessed as a “Promising lad“.

His decision to transfer again was probably influenced by his elder brother Walter Garrad, who was a Sergeant (8953) with ‘D’ Company of the 1st Battalion. He probably had the misfortune to see his younger brother fall close to where he was fighting to the right of the line at Audregnies. [N.B. Both of these brothers may have know Grandad as he was in the same Battalion.]

Frederick’s Medal Card shows he entered France on 16th August. He was reported missing on 24th August 1914. For ‘Official Purposes‘ he was deemed to have been killed in action on that date by a War Office order dated 5th February 1916.

At about 3.45 pm on the 24th August the Battalions in action began to retire. Captain Jones, on the right flank with the support platoons of ‘D’ Company had also it seems, got news of the withdrawal from, presumably, stragglers out on his flanks, because he began to retire down the railway line.

The stragglers moved down the railway line towards the Bois d’Audregnies. They passed a small group of trees, then along a track in a field, into a hedge-bordered lane, then to pasture-land south-west of Wiheries. ‘Here‘, writes Crookenden, ‘they ran into the Magdeburg Regiment which was going into bivouac. Of those who remained Capt. Jones and Pte. E. Hogan were killed. Cpl. Crookes, who had previously been wounded, collapsed and Pte. F. Garrad was mortally wounded.’