Officers, N.C.O.s and Men of the 1st Battalion, Buried in Grangegorman Cemetery 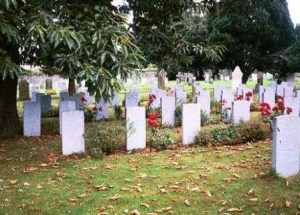 The cemetery was opened in 1876 and was used for the burial of British service personnel and their near relatives.

A Screen Wall Memorial of a simple design standing nearly two metres high and fifteen metres long has been built of Irish limestone to commemorate the names of those war casualties whose graves lie elsewhere in Ireland and can no longer be maintained.

The Cemetery contains 1 soldier of the Cheshire Regiment, who died in 1918.

In 1890 (Census) the family were living at 14.1 Henrietta Street, Dublin. By 1911 the family had moved to Ormond Quay, Dublin, though by then Patrick was serving with his Regiment.

At the time of his enlistment he stated his occupation as ‘Grocer’s Porter‘. He was 5’ 4″ tall (1.63 m.), weighed 105 lbs. (7 st. 7lbs.) had a ‘fresh’ complexion and black hair. His religion was Roman Catholic. His vision was not very acute, but clearly good enough for his enlistment. 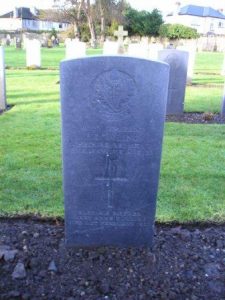 Military Service: Patrick attested at Dublin on 15th June 1906 age of 15 yrs 5 mths, although he stated his age as 18 years 2 mths. His period of service was for 12 years Active Service. He was immediately posted to Chester on 15th June, then to Bordon between 19th August 1908 and 23rd September 1909. Then back to Belfast until 31st August 1911, returning to Chester the following day. Whilst in Chester he spent two periods in Hospital, in 1913, suffering from rheumatic fever.

Unusually for the time by his first promotion he had recorded no cases of drunkenness. On 3rd September 1909 he was promoted to Lance Corporal; made full Corporal on 14th December 1910 and Lance Sergeant on 26th March 1912, until 18th May 1913 when he made full Sergeant. All of his promotions were recommended because he was “intelligent, hard working and reliable“.

Patrick entered France with ‘C’ Coy, under Captain Dugmore, on the 16th August 1914 and was taken prisoner after the Battle at Audregnies on 24 August 1914. During the battle he received a gunshot wound to the left thigh and was initially treated in Wiheries Hospital until 15th November 1914.

After a short stay (4 days) at Mons Hospital, he was moved to Gottingen, where he remained until 3rd April 1915. On 25th June 1915 Patrick was sent back to Brussels Hospital until 14th January 1916, then to Aachen and finally to Cologne, 19th January to 3rd February 1916. He then left hospital care and was sent to Camp Stendal (Altmark) until 25th May 1916.

On 29th May 1916 he was sent from Germany into internment in Switzerland (something that often happened with seriously ill or injured prisoners). He left Switzerland for England on 31st July 1917, arriving on 11th September.

It seems from his Service Papers that some care was taken to treat Patrick’s wounds throughout his time in captivity. On 15th June 1915 he received an osteotomy operation at Brussels, resulting in a shortening of his leg by 9 cm. A second operation in Lucerne, Switzerland (28th October 1916) attempted to consolidate the bone (Pseudoarthrosis femoris) but this added suppuration of the skin where a bone fragment was protruding and ankylosis (stiffening) of the left knee joint.

On returning to England Patrick was assessed on 28 September 1917 at the Queen Alexandra Orthopaedic Hospital, Shepherd’s Bush, London, after an operation on 17th to remove a protruding portion of the bone. The situation was still grave, bone fragments were overlapping and over the course of the next months he was tried with a Hodgkin’s splint, callipers, but the bone ends would not heal.

On 4th May 1918 he was operated on again and another osteotomy performed along the line of the fracture. Four hours later Patrick collapsed and intravenous saline was administered. At 7.00 p.m. he appeared to have improved but at 2.10 a.m. on 5th May 1918 Patrick died from “post-operative shock” in the Military Orthopaedic Hospital, Shepherd’s Bush, London. Rather grudgingly, it seems, it was deemed that “His disability was caused by military service“!

After nearly 4 years of unimaginable agony Patrick’s  body was returned home for internment in his native Ireland.