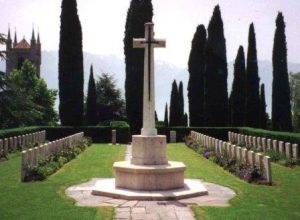 This cemetery contains 88 British and Commonwealth sailors, soldiers and airmen, fallen in the Great War. 61 died before repatriation.

In the year 1916, agreements were made between the Swiss Government and the French, British and German Governments under which a certain number of wounded prisoners of war were interned in Switzerland.

The first British prisoners arrived on Swiss soil at the end of May, 1916; and the average number under treatment during the remainder of the war was 2,000.

The Cemetery contains 1 soldier of the original 1st Battalion, Cheshire Regiment, who died in 1918.

Personal: William was born in Mile End, London, on 26th June 1893. He was the 3rd son of Frederick James Victor and Annie Elizabeth (née Cook) Coltman. However, Frederick died in the September quarter 1901.

On 13th September 1905 he was sent, with his brothers, by the Metropolitan Asylums Board, Grays, Essex, to the training ship ‘Exmouth‘ where he remained until 3rd November 1906. After the father’s death it is fair to say that the family were in dire straights and had to be “taken into care” by the Poor Law Commissioners. It is no wonder that William sought to join the Army at such an early age (see below).

At the time of his enlistment he was 4′ 7½” tall (1.41 m.), weighed 72 lbs. (5 st. 2lbs.) had a ‘fresh‘ complexion, blue eyes and light brown hair. His religion was Church of England. His vision was not very acute, but clearly good enough for his enlistment. 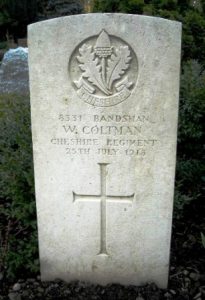 Military Service: William attested at Lichfield on 30th November 1906 as a boy bandsman, declared age of 14 yrs 5 mths, although he was actually born on 26th June 1893, so in fact he was only 12 yrs 5 mths. His period of service was for 12 years Active Service.

He was described (2nd October 1913) as “intelligent, hard-working and reliable“, a gifted clarinettist as showed ‘promise‘ on the cello!

He was awarded his first Good Conduct Badge on 4th December 1908 and his second on 30th November 1911. Even so, by 1912 he had recorded “a number of cases of drunkenness“.

He was described as a “very excellent lad” and received a ‘VG’ for most of his studies.. On 24th September 1909 he was posted to Belfast and spent 10 days in hospital in August 1911 suffering from diphtheria.

He entered France with ‘C’ Company on the 16th August 1914 and according to an account in the ‘Oak Leaf‘ was taken prisoner after the Battle at Audregnies on 24th August 1914. During the Battle he would have fought on the right of the line under Captain W.E.L.R. Dugmore.

Prisoners of War at Soltau Camp

William died whilst officially a “prisoner of war” at Leysin, Switzerland.

His family was informed on 23rd September 1918 that he had died from TB at 7.00 on 25th July 1918. He was initially buried in Leysin Cemetery. Later, along with many others, he was reburied in Vevey.

At the same time they were sent his possessions – a “box of sundries” and Fr.104.30. [N.B. 104 Swiss francs would be about £5 – an equivalent of about £240 today – 2020] The box contained books and rolls of music; 3 religious books; a rosary; pencil; coins; handkerchief; cloth badges; photos; cards; a purse and an illustrated book of Switzerland.

Maybe he contracted the disease in his German p.o.w. camp and was transferred to Switzerland for the better conditions – if so it says a lot about the treatment of our boys later in the War. For a young man who had suffered such hardships as a child it was a sad end. 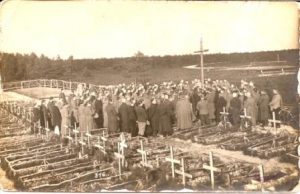 However, Soltau p.o.w. camp had a reputation for mistreatment of prisoners, especially those ill with tuberculosis, for which it had a large number of cases.

The New York Times of 5th January 1917 reported one instance of 70 Belgian TB patients being returned home in a cattle truck.

He was posted to France on 8th September 1915 and joined the “Mediterranean Expeditionary Force” in October 1915. Thomas served in Salonika in 1917 and was demobilised on 8th June 1919, after 4 years 286 days with the Colours.