Grandma Kate’s parents, John and Mary Anne Elizabeth (née Ashmole) Newland grew up in military families, in India. In fact, Kate was born at sea, on board the SS Tyburnia, returning the family to England from Poona to Portsmouth.

Kate’s father, John Newland, was born at Pillerton Hersey, Warwickshire, on 15th April 1835. His father, also John, was a farmer, married to Sarah (née Gardner) and John was their oldest son, (third child of eight).

It would seem the farming life did not appeal to John Jnr., however, because at the age of 20, on 10th September 1855, he travelled to East Grinstead, Sussex, to enlist in the 56th (West Sussex) Regiment of Foot.

His Service Papers show that John served in Malta for 193 days and spent a further 13 years 273 days in what was termed the “East Indies“, but was actually India.

John was promoted from Private to Corporal on 9th October 1858 and to Colour Sergeant on 26th May 1864.  In between these dates he married Mary Anne Elizabeth Ashmole, at St John the Evangelist Church, Colaba, Bombay, on 9th October 1861.

(N.B. The church is also known as “The Afghan Church“, as it was built a memorial to the thousands of soldiers who died at the First Anglo-Afghan War.)

The ship bringing the family home left India on 16th December 1865, arriving in Portsmouth on 7th April 1866. Quartermaster Sergeant John Newland spent another 11 years with the Regiment, based in Stratford-on-Avon, Warwickshire.

He was finally discharged on 8th January 1877, having earned the General Service Medal and four Good Conduct Medals. His final report from his Commanding Officer was general very good.

The Census of four years later sees John and his family living on Willowsbow Road, Old Stratford, where he was working as a “Brewers Clerk“. Ten years later (1891 Census) the family had moved to Derby. Daughter, Kate, had met and married Isaac Conway, on 19th September 1886, and Grandad had been born on 2 April 1887.

John, now employed as an “Insurance Agent“, was living with Mary at 8 Yates Street, Derby. She died  on 11th October 1895 at 3 Abbey Street, Derby, and John died of Bronchitis 15 years later, living at 91 Boyer Street, aged 71. 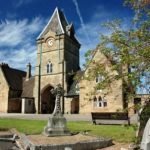 It is tempting to think that the young Ernest John Conway had been fascinated by listening to his Grandfather’s stories of his time in the Army and in India. Who knows, maybe this gave him the idea to leave home himself and join the Cheshire Regiment in 1905 – shortly before it too left for India.