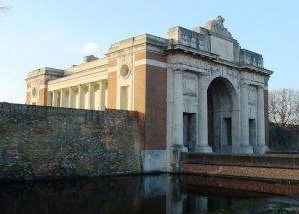 The Menin Gate Memorial commemorates 54,326 British and Commonwealth soldiers (except New Zealand) who fell in the fighting in the Ypres salient from November 1914  and who have no known grave.

Names are listed on the memorial by Regiments, under the title of each Regiment by rank, and under each rank alphabetically. 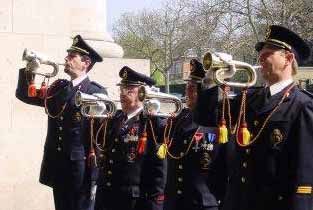 Every night at 8.00 p.m. the noise of traffic ceases and a stillness descends over the memorial when up to six members of the regular buglers from the local volunteer Fire Brigade step into the roadway under the memorial arch.

They play Last Post, followed by a short silence and then play Reveille.

With the exception of the Second World War years this has happened every night since 11 November 1929, having first been played on 1 July 1928 for a 4 month period.

…. about the Last Post Ceremony at the Menin Gate 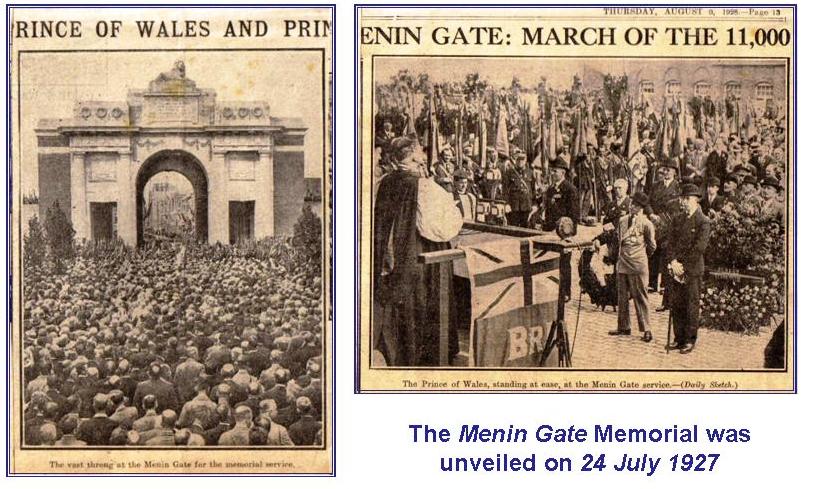 During November the 1st Battalion was involved in what became officially known as the:

This was by now the third stage:

However, for the Battalion the days leading up to the 11th proved more damaging.  Captain Pollock-Holsoll and 2nd Lieutenant Anderson were killed leading a counter-attack against the enemy who had penetrated the front lines, and although 25 prisoners were taken the Battalion lost 36 NCOs and men killed or wounded.

[N.B. Capt. George Bertram POLLOCK-HODSOLL was attached to the 1st Battalion on 4th November 1914, from the 3rd Battalion, Suffolk Regiment. He and 2/Lt. Gerard Rupert Laurie ANDERSON, were both Killed in Action 3 or 5 days later on the 7th or 9th November. Lt. Anderson was one of the contingent of 5 Officers and 248 other ranks who joined the 1st Battalion on 16th October, the day before the action at Festubert.]

On the 11th November the War Diary notes that Enemy appeared to massing in a wood South of the Battalion’s position but their shells scattered them and they were easily repulsed by rifle fire, with heavy casualties to them. It is understood that the Battalion’s rifle fire did much damage to the enemy attacking the Gordon Highlanders on the left flank.

The 14th was another day of heavy casualties. 30 NCOs and men were killed wounded or missing as the Battalion retired from the front line trenches under heavy shell fire to trenches 150 yards in the rear.

On the 21st November, as the Battle drew to a close, the War Diary records that since going into the trenches 35 men had been killed and 99 wounded. The number of missing was not known. The following day the Battalion withdrew to Locre and two days later on to Bailleul. 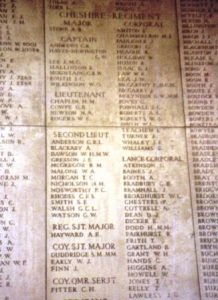 Gradually all British troops were replaced around Ypres by the French and November 22nd became the ‘official’ end of the First Battle of Ypres.

The Menin Gate Memorial lists the names of 4 Officers and 66 NCOs and men of the 1st Battalion who were “Old Contemptibles”.

There are also 5 men of the 1/6th Battalion who reinforced the 1st in December, all of whom have no known grave.

Of the 74 Cheshires’ men (i.e. 69 from 1st Battalion and 5 from 1st/6th) that are commemorated on the Menin Gate Memorial, FIFTEEN were of the original 1st Battalion who sailed for France in August.

The TEN men named below were killed in action during The First Battle of Ypres, in November 1914. CLICK the names below to read more about these men from the original 1st Battalion Old Contemptibles. – 10 in November 1914 and 5 in 1915.

The remaining FIVE had survived the Battles at Audregnies, La Bassée and First Ypres, only to be killed later in the War – e.g. 2nd Battle of Ypres, April/May 1915.

CLICK the names below to read more about these five men (+ 1 Replacement) from the original 1st Battalion Old Contemptibles.

*** Pte. 7085 Frank McCARTHY, was a replacement to the original 1st Battalion, who was awarded the D.C.M. for an action linked to 2/Lt. Henry Noel ATKINSON. 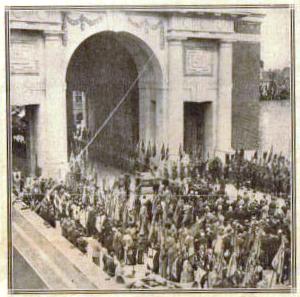 Opening of the Menin Gate in 1928 (Source: Daily Mail)

In addition to the soldiers named above, during 1914 many reinforcements of Officers and men joined the Battalion to replace those lost (killed, wounded or captured) during the major engagements at Audregnies, La Bassée and Nonne Boschon.

Sixty-seven of those replacements were killed in action or died of wounds and are now also commemorated on the Menin Gate Memorial.

They are named below and by clicking the name link you can view their details of when they died.