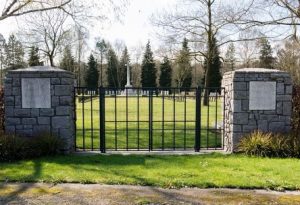 This is a large cemetery containing 773 graves: 235 British and 538 German. 175 of the British are named the remainder “Known Unto God“.

The Cemetery was started by the Germans in 1914 and used by them to bury British casualties. It was used in again in 1918 to bring together burials from different parts of the battlefield.

Hautrage Military Cemetery contains just 1 soldier of the Cheshire Regiment, but a very large majority of the others buried here were killed in action on 23 or 24 August 1914 during the ‘Retreat from Mons‘. 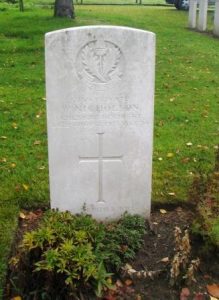 Military Service: Currently his Army records are unavailable, and do not appear to have survived the Second World War bombing; all that is known is that William enlisted at Chester.

His Medal Index Card shows that at the outbreak of War William  entered France on 16th August 1914 and in view of his eligibility for the Long Service and Good Conduct Medal must have been serving at the time.

William was killed in action on 24th August 1914 during the Battalion’s stand at Audregnies. Unfortunately, his name did not appear on the published Battalion List, so it is not known in which part of the action he was located.

N.B. William had received his Long Service and Good Conduct Medal, awarded to men who had completed 18 years of irreproachable service. William was only 34 when he was killed, so must have enlisted when only 16 and served for over half of his life with the Colours