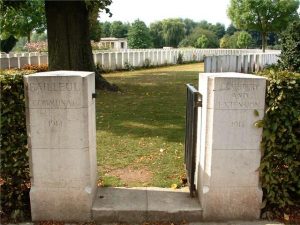 This cemetery contains 610 Commonwealth burials, 10 of whom are ‘Known Unto God‘. There are 585 from the UK, 21 Canadians and 4 from India.

The earliest Commonwealth burials at Bailleul were made at the east end of the communal cemetery and in April 1915, when the space available had been filled, the extension was opened on the east side of the cemetery.

The Extension is vast, containing over 4400 Commonwealth soldiers.

The Cemetery contains 5 named soldiers of the Cheshire Regiment, 3 of whom are from the original 1st Battalion and 2 are from the 1/6 Battalion reinforcements.

The Cemetery extension is also the burial place of one of the 6 men of the Regiment who were “Shot at Dawn” during the War.

Use the links below to read a little more about each man and see where he is buried. All of the men named below were awarded the 1914 Star (with “clasps and roses“), the British War Medal and the Victory Medal. 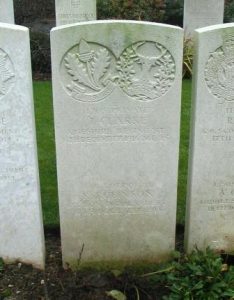 Military Service:  Currently his Army Service Papers are unavailable, probably destroyed by Second World War bombing. All that is known is that he enlisted at Stockport. His Medal Index Card shows that he entered France on 10 November 1914 and died of wounds on 16th December.

It is likely, therefore, that he was one of the Reinforcements of 64 N.C.O.s & men under 2/Lt. Vance who arrived to join the Battalion on 6th December.

However, it is difficult to see where Joseph received the wounds from which he died on 16th as the War Diary reports that from 20th November the Battalion was in billets at Bailleul.

Personal: Wilfred was born in St Paul’s, Stalybridge, Cheshire, the eldest son of the late William & Mary Frances Platt (née Bamford) of Stalybridge (married September quarter 1893). In 1901 he was living with his widowed mother (a cotton weaver) at the home of his widowed grandmother and her three other children at Gordon Terrace, Stalybridge. Wilfred had a younger brother Herbert, aged 2. (1901 Census 13/3798)

Wilfred’s father died in the March quarter 1901, aged 29. In the June quarter 1904 Mary re-married Elijah Hirst and the following year daughter Harriett (surname ‘Platt‘) was born. By 1911 (Census RG 14/24415) Elijah had also died (September quarter 1910) and the family were living at 12 Kinder Street Stalybridge. In the September quarter 1911 Mary married for the third time. 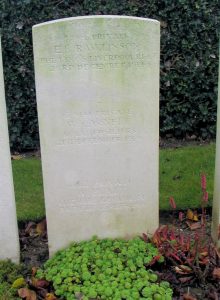 Military Service: Currently his Army records are unavailable. All that is known is that Wilfred enlisted at Stalybridge, Cheshire. His Medal Index Card shows that he entered France on 10 November 1914 and that he was killed in action on 24th December. (The SDGW database, however, states that he “Died of Wounds“, as does ‘The Register of Soldiers’ Effects‘.)

It is likely, therefore, that he was one of the Reinforcements of 64 N.C.O.s & men under 2/Lt. Vance who arrived to join the Battalion on 6th December whilst in their billets at Bailleul.

The War Diary indicates that on the 24th December the Battalion was at Wulverghan with “‘B’ & ‘D’ Coys in trenches and ‘A’ & ‘C’ Coys in billets“.

It was the day a large contingent of reinforcements arrived: “Capt. Lloyd, Lt. Mares, 2/Lt. Hazeon, 2/Lt. Rhodes & 2/Lt. Michener & 444 N.C.O.s & men joined from England“. There was also “1 man wounded” who could have been Wilfred Platt, though more likely Cpl. James Smith (below).

Personal: According to his Service Record James was born in Liverpool in March 1891, the son of Thomas (Labourer) and Annie Smith of 65 Rydal Street, Liverpool. He had two an older brother, Thomas, and an older sister, Annie. (1901 Census RG 13/3482) At the time of his enlistment he was employed as a ‘Labourer‘. 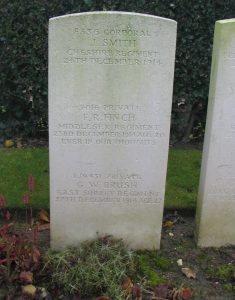 Before his first training in 1909 he did a month long musketry course from 28th May to 27th June.

James was mobilised on 9th August 1914 and his Medal Index Card shows that he was posted to the 1st Battalion and entered France on 11th September 1914, having been promoted to Corporal on the 8th. It is likely that he caught up with the Battalion in time for the Battle of the Aisne.

He died of a gunshot wound to the head at the Number 8 Clearing Station Hospital at 10.00 p.m. on Christmas Eve 1914. (The Hospital Casualty Form stated: “The deceased was admitted here wearing hospital clothing, and the only article found on him was his identity disc.” (List 10702)

It is unclear, therefore, where James received the wounds from which he died, although being a head wound and dying in the Clearing Station it is more than likely he had been wounded very recently. From the 18th – 24th December the Battalion was in trenches at Wulverghan, alternating two Companies at a time.

On the 24th the War Diary reported “1 man wounded” – most likely Corporal James Smith. In total, including 105 days in France, he had served 6 years 78 days with the Regiment.

Personal: Edward was born in Woolhampton, Berkshire, in the September quarter 1888. He was the son of Edward (General Labourer) and Georgina Ellen (née Woodley) Stagg. He had 2 older brothers and an older sister, James Harry, Alfred and Martha, and a younger brother, Joseph. (Source: 1891 Census). At the time of that Census the family were living at 5 The Crescent, Woolhampton.

By the time of the next Census (1901 RG 13/1123) four more children had been born to the family, Ketty, Edith, Dollie and Benjamin. The 1911 Census (RG 14/6837) shows the family at the same address, with Edward occupation being “Army Reservist Unemployed“. 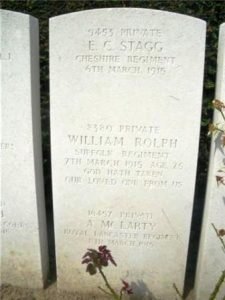 Military Service:  Formerly: 7652 Royal Berkshire Regiment. Probably as a Reservist, whilst the family were living in Woolhampton, Berkshire. (Up to at least 1911)

Edward’s Army records appear to have been destroyed by Second World War bombing. However, his Service Number would suggest he enlisted into the Cheshires towards the end of 1912, but this would not account for him being a Reservist in 1914.

As a Reservist he was recalled to the 1st Battalion at the outbreak of War and his Medal Card shows he entered France 16th August.

His CWGC entry states he was 2nd Battalion, so it is probable that being a reservist he re-joined the 1st as his own Battalion was still in India.

He fought under Captain Dugmore on the right flank of the Battalion’s Action at Audregnies on 24th August. Battalion records state that he was wounded, though not captured, at Audregnies.

He is buried in Bailleul Cemetery. After it was captured on 14th October 1914 by the 19th Brigade and the 4th Division, Bailleul became an important railhead, air depot and hospital centre. Edward Pension Record states that he “Died of Disease – Acute Nephritis” on 6th March 1915. 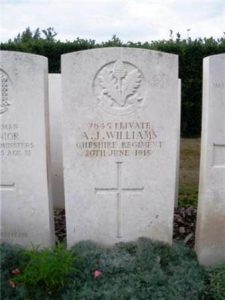 Military Service:  Currently his Army records are unavailable, probably destroyed. Albert enlisted at Birkenhead, Cheshire and his service number suggests he enlisted about 1908 on a 3 + 9 period of service. (3 years active + 9 years on reserve.)

As a reservist he was recalled to the 1st Battalion at the outbreak of War and his Medal Card shows he entered France 16 August.

He fought under Captain Shore on the left of the Battalion’s action at Audregnies on 24th August 1914.

Battalion records indicate that he was neither wounded nor captured, at Audregnies, so he no doubt took part in subsequent actions at La Bassée and Nonne Boschen.

He died of wounds received in action on 20th June 1915 at No. 3 Casualty Clearing Station, Bailleul.

At the time he died the 1st Battalion were in front of Zillebeke, from Hill 60 to the North, during a long period in the trenches during June 1915.

His Medal Index Card (right) states that he ‘deserted‘ on 16th November 1914, right at the end of the First Battle for Ypres, but this has been crossed out – whether a mistake or change of mind, without his service records, who can say?

The Bailleul Cemetery Extension is one of the Cemeteries in France and Belgium that contains the bodies of one of the 306 soldiers “Shot at Dawn” (but not 40 others executed for murder and mutiny) during the First World War.

Six of these men were from various Battalions of the Cheshire Regiment, though none from the 1st Battalion

On 16th August 2006 Des Browne, the Defence Secretary, announced that all 306 had been granted posthumous pardons and subsequently a Memorial was erected in the National Memorial Arboretum to the memory of these men.

One of the Cheshire Regiment’s executed men, L/Cpl Moon, is buried in this Cemetery. 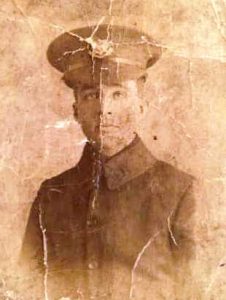 Personal: William was the fourth (of four) child of Alfred and Mary (née Thompson) Moon and was born at 7 Weaver’s Street, Chester in 1896. His older siblings were Albert, Martha and Elizabeth (1901 Census RG 13/3372).

By the 1911 Census William was living with his mother and sister. Elizabeth, at 22 Commonhall Street, Chester and working as a “Stationer’s Porter“. 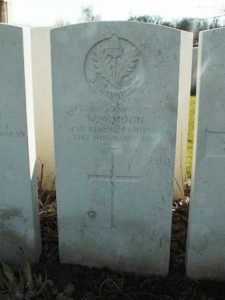 The 11th Battalion landed in France two days earlier as part of 75th Brigade in the 25th Division and their first action was in defence of the German attack on Vimy Ridge in May 1916. The Battalion was one of the first into action on the first day of the Battle of the Somme, attacking Thiepval from the direction of Authuille.

William was one of the members of A Company, 11th Battalion. In December 1915, during another battle, an artillery shell landed near him and he was hospitalised at least twice.

On 22nd October 1916 the Battalion was relieved to go back to Albert then Warley and Authieule before entraining at Doullens for Bailleul on the 29th October 1916.

Lance Corporal Moon had deserted at some time during the Somme Battle and was tried at a Courts Martial on the 11th November 1916, convicted and shot 10 days later.

“Lance-Corporal William Moon was one of many shell-shocked soldiers to face the firing squad, the explosion of his mate’s head and brains into his face putting him, as he wrote with some understatement, “in a queer state”. Other deserters had simply seen enough horror and decided to vote with their feet before they, too, lost their lives or their senses.”

Bailleul Cemetery is the resting place of two other men executed for Desertion:  Pte. 2408 William Roberts  and   Pte. 26028 John Rogers.