Officers, N.C.O.s and Men of the 1st Battalion, Buried in Tuileries British Cemetery 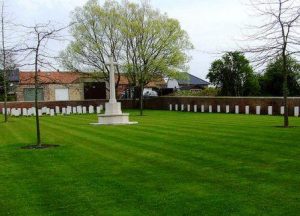 This cemetery is situated on the grounds of an old tile works, which is the meaning of ‘Tuileries‘. It was started in 1915 but subsequently destroyed by shellfire during the war, as its chimneys were an ideal target for enemy guns.

The cemetery is now set out with all the graves around the edge of the plot, as it was found to be impossible to identify the exact location of each grave when the cemetery was rebuilt after the Armistice.

The Cemetery contains 2 soldiers of the original 1st Battalion, Cheshire Regiment. Use the links below to read more about them.

Personal: Peter was born in St Peter’s Parish, Birkenhead, Cheshire, on 1st January 1894, the son of Peter and Elizabeth (née Allen ?) Green. He had a younger brother, Edward James Green (see below), and a sister, Mary Emily.

Edwards attended St. Peter’s Schools, Birkenhead and before his enlistment was employed as a “Carter“. [Source: ‘De Ruvigny’s Roll of Honour, 1914-1919′] 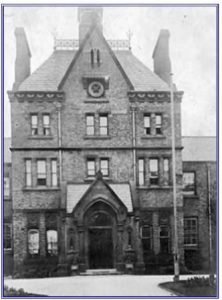 By 1911 (Census RG 14/21979) Peter was back living with his mother, older brother, Edward James, and younger sisters, Emily and Rose Elizabeth, at 19 Hope Street, Birkenhead.

Peter’s Pension Record Card shows that his family were living at 21 Livingston Street, Birkenhead, but not what the value of his Pension was. 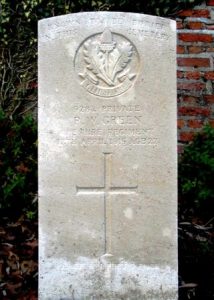 Military Service: Peter enlisted in the Cheshire Regiment at Birkenhead, Cheshire. Currently his Army records are unavailable, probably destroyed in Second World War bombing. However, his Army Serial Number would suggest an enlistment date in 1909.

If his terms of enlistment had been 3 + 9 (i.e. 3 years active service, followed by 9 years reserve), Edward would have been transferred to the Reserve List in 1912/1913 and recalled to the Battalion at the outbreak of the War.

Peter’s Medal Index Card shows he entered France on 18th December 1914, not the 16th August when the rest of the Battalion arrived.

The 1st Battalion had been in the line earlier in the month at Vlamertinghe and Dickebusch, but the War Diary clearly states “No casualties” on a number of those days. It is possible, of course, that Peter had been transferred to a different Battalion, but without his Service Papers it is impossible to say.

He was, however, killed in action on the 12th and buried in the Tuileries Cemetery, Sp. Mem. E. 5. [N.B. Zillebeke to Tuileries is only 650 metres.]

He died of wounds on 24th December 1914, in The Duchess of Westminster’s Hospital (No.1 B.R.C.S) in Le Touquet and is buried in Grave I.A.14. in the Le Touquet-Paris Plage Cemetery. 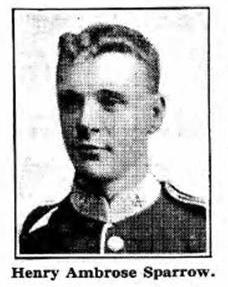 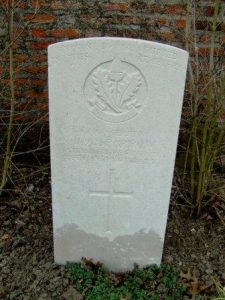 Military Service: Henry enlisted in Chester on 26th November 1907 and 3 months later was posted to the 1st Battalion. On 26th March 1912 Henry was promoted to (Paid) Lance Corporal and to Acting Sergeant on 20th March 1915. His term of service was & + 5 years, i.e. 7 years on active service followed by 5 years reserve.

During his time with the Regiment Henry had a number of runs-in with authority, being ‘Confined to Barracks‘ on a number of occasions, but in October 1913, when he qualified as a “Machine-gunner” he was assessed as “Very intelligent and hard working“.

He sailed on the SS Massilia on 14th August and his Medal Card confirms that he entered France on 16th August. He fought under Captain E.R. Jones or Captain W.S. Rich on the right flank of the Battalion’s action at Audregnies on 24th August.

Henry was killed on May 25th 1915, the day that the Battle of 2nd Ypres ended when Germans took Bellewaerde Ridge and Mousetrap Farm. According to Crookenden (page 52) the 1st Battalion were along a line in front of Zillebeke from Hill 60 to the North. carrying out “demonstrations” in support of an attack in the Hooge area. “Enemy shelling was heavy and German retaliation with minenwerfer (short range mortars) was worse“.

The 1st Battalion War Diary for the day Henry was killed shows them at “Dormy House, Zillebeke”, and reads: “Headquarters re-installed at Dormy House which was partially burnt yesterday. C.O. returned from trenches at 10.30 a.m. up to which hour all quiet on our front.

Permanent look-out post established on ridge immediately N. of Head Quarters, with orders to watch Menin Road by day and patrol N & N.E. by night.” There is no record of any casualties.

The “re-installation” of H.Q. was following a gas attack the previous day, when Headquarters was moved to Tuileries. Again no casualties were recorded in the Diary, although it is possible that Henry succumbed to his injuries the following day. Without his Service Papers we cannot say.