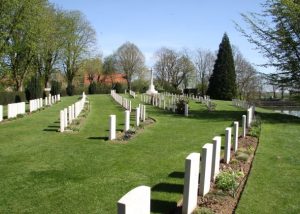 From October 1914 to the summer of 1918, Ypres (now Ieper) formed the centre of a salient held by Commonwealth (and for a while French) forces.

From April 1915, the town was bombarded and destroyed more completely than any other town of its size on the western front.

The cemetery is by the Lille Gate, on top of the old rampart, over what had been dug-outs. It was begun by French troops in November 1914 and used by Commonwealth units at intervals from February 1915 to April 1918.

From February 1915 to April 1918 Ramparts Cemetery was used by Commonwealth Forces. Most of the 1915 casualties buried here were killed in February, March and April and then in July and August of that year.

After the Armistice in November 1918 the French graves were removed from Ramparts Cemetery. The French soldiers would most likely have been reburied in a French National Military Cemetery.

There are 198 Commonwealth graves in the cemetery, of which 188 are identified casualties.

The Cemetery contains 2 soldiers of the Cheshire Regiment, not from the original 1st Battalion, a Private who joined the Battalion in September 1914 and an Officer who arrived from the 3rd (Reserve) Battalion on 6th December 1914. 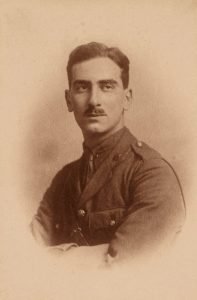 In 1901 (Census RG 14) the family was living at Ballyvoghan, Ardagh, Limerick, Ireland. Mary Anne’ sister, Amelia Griffin, seems to have joined the family to help the widowed Joseph look after the children.

By the time of the 1911 Census Charles was a student at Campbell College, Belmont, Belfast, where he had been since April 1906 and played for the Rugby 1st XV in 1910-11.  A year later on 20th February 1912 UK Railway Employment Records show he was employed as an ‘Apprentice‘ with London and North Western Railways in London, on 1 months trial, earning 4 shillings [25p] per week (i.e. about £25 today – 2020).

Military Service: At the outbreak of War Charles volunteered for active service and was granted a Commission in the Cheshire Regiment, ‘on probation’ with the 3rd (Reserve) Battalion.

He was posted to the the B.E.F. in France in early December 1914 and transferred to the 1st Battalion. The War Diary for 6th December 1914 reads: “Battalion paraded for divine service. Reinforcements of 64 N.C.O.s & men under 2/Lt. Vance arrive.”

This date, therefore, does not qualify him as an “Old Contemptible“, but he did command a section of the 1st during 1914.

At the beginning of March 1915 the 1st Battalion was in Reserve at Bailleul, but moved to new billets at Vlamertinghe and Ouderdom on the 3rd. The following day it took over trenches between Ypres and St Eloi from the Northumberland Fusiliers. The Battalion remained in the trenches until being relieved by the Norfolks on the 6th, when they returned to the Reserve at Kruisstraat.

Two days later on 8th March the two Battalions reversed positions and the War Diary reads: “Returned to ‘A’ Sector trenches, relieving Norfolks”. Charles was killed in action the following day: “In trenches, ‘A’ Sector. Killed in Action Lt. C.R. Vance, 3/Cheshire Regt.”. Only one other man was killed in action on the same day – Pte. 6426 Harry Dobson, who is also buried in this Cemetery.

Charles’ older brother, 2/Lt. Robert Lancelot Vance, enlisted in the 4th Battn. Royal Irish Fusiliers on 21st August 1914. On 3rd May 1916 he was serving as a Lieut. with the Indian Medical Service, remaining until 1922.

In 1891 (Census RG 12/2816) the family was living at 220 Crompton Road, Macclesfield. By 1901 (Census RG 13/613) 18 years old Harry had recently enlisted in the Cheshire Regiment and was living at the Aldershot Military Barracks, with the other recent recruits.

By 1911 (Census RG 14/21466) Harry had completed the ‘Active’ part of his Army Service and had returned to live at his parents’ home, now 33 Union Street, Macclesfield. Harry was still single and employed as a “Clay Pipe Maker“.

Harry’s father, John William, died in the March quarter 1914, aged 54. Despite bearing a total of 17 children, Eliza Jane lived until early 1942 when she died in Macclesfield, aged 80 years. 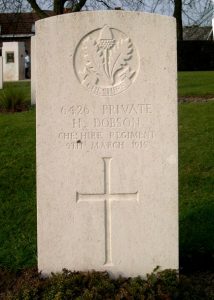 Based on the 1901 Census (above) Harry must have enlisted in the Cheshire Regiment in 1900 or early 1901 (e.g. Pte. 6360 A.W. Walden enlisted 2nd March 1900). His Service Papers are not available, but he would have completed his 12 years of ‘Active’ + ‘Reserve’ Service well before the outbreak of War so it is likely he re-enlisted.

Harry’s Medal Index Card shows that he was posted to the BEF in France on 20th September 1914. He was probably one of those who joined the Battalion at Le Mesnil on the 24th. The War Diary recorded: “The following Officers arrived today: Captain L A Forster, Res of Off.;  Captain S Butterworth, 3rd Ches;  2 Lt H S Stalker, Res of Off.;  2 Lt L B J Pogson, 1/Ches Regt and 21 men.” If so he joined just prior to he Battle of the Aisne.

During October 1914 the 1st Battalion, Cheshire Regiment, saw action in four Battles, all to the west and north-west of Bethune, Pas-de-Calais. Harry, therefore, fought at Festubert, Violaines, La Bassee and Neuve Chappelle. Similarly, in November, where the Battalion fought at the First Battle of Ypres.

At the beginning of March 1915 the 1st Battalion was in Reserve at Bailleul, but moved to new billets at Vlamertinghe and Ouderdom on the 3rd. The following day it took over trenches between Ypres and St Eloi from the Northumberland Fusiliers. The Battalion remained in the trenches until being relieved by the Norfolks on the 6th, when they returned to the Reserve at Kruisstraat.

Harry’s younger brother, Pte. 6700 Albert DOBSON was serving in the 2nd Battalion, Cheshire Regiment, when he died at Secunderabad, India, on 9th April 1909. He had enlisted on 18th November 1901.

Harry’s younger brother, Pte. 23039 Joseph DOBSON was mobilised as a Reservist on 9th August 1915. After a time in the York and Lancs Regiment he was posted back to the 2nd Battalion, Cheshire.

Harry’s younger brother, Cpl. 5827 George Frederick DOBSON enlisted in the 4th Battn. Cheshire Regiment on 13th March 1905 and served until July 1910. He was not mobilised as a Reservist.

This was a very brave family who served their Queen, King and Country and made the Supreme Sacrifice.