Officers, N.C.O.s and Men of the 1st Battalion, Buried in Aire Communal Cemetery 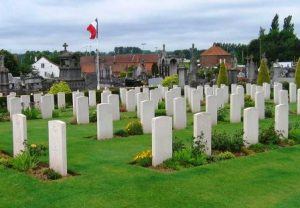 This cemetery contains 894 Commonwealth soldiers’ burials from the Great War (868 from the UK, 15 from Canada, 6 Australians, 1 from New Zealand and 4 from India). There are also 7 Germans and 1 from France.

From March 1915 to February 1918, Aire (-sur-la-Lys) was a busy but peaceful centre used by Commonwealth forces as corps headquarters. The Highland Casualty Clearing Station was based there as was the 39th Stationary Hospital (from May 1917) and other medical units.

The Cemetery contains 2 soldiers of the Cheshire Regiment, who both died in 1918.

Personal: Richard was born in the March quarter 1896, the eldest son of Richard John and Susannah (née Griffiths) Fazackerly (married March quarter 1892) of Queen’s Place, Tranmere, Birkenhead, Cheshire. He had an elder sister, Elizabeth, and 2 younger brothers, Joseph (1901 Census 13/3396) and Harold (b. 1910).

However, his Service Number would suggest an enlistment date early in 1913.

As a regular soldier he sailed for France at the outbreak of War and his Medal Card shows he entered France on 16th August 1914 and he would have fought with the 1st Battalion at Audregnies, where he fought on the left of the line under Captain Shore, La Bassée and 1st Ypres in 1914.

On 11th April 1918 the 1st Battalion arrived at Aire, before moving into Reserve at Le Touquet the following day. It returned to the front line on the 16th, relieving the 1st East Surrey Regiment in front of Nieppe Forest. (1st Battalion War Diary) The Brtitish 5th Division had entered Nieppe Forest on 12th April, 1918. The Division made its way through to the eastern edge and established a 2000 yard (c. 1800 m.) front facing Merville, part of what became the Battle of Hazebrouck.

The Battalion remained in the front line until 27th April and the Diary recorded “Casualties heavy from gas” (24th) and “Gas shelling continued until 3 a.m.” (27th). There is no record of deaths but it is more than likely that Richard received his wounds during those actions.

On 1st May 1918 Richard died at the 54th Casualty Clearing Station, Aire, of wounds received in action. The burials in plots II, III and IV (rows A to F) relate to the fighting of 1918, when the 54th CCS came to Aire and the town was, for a while, within 13 kilometres of the German lines.

At the time of his enlistment he was employed as a ‘Carter‘. When he joined the Cheshires he was 5’ 5¼” tall (1.65 m.), weighed 132 lbs. (9 st. 6lbs.) had a ‘fresh‘ complexion, brown eyes and brown hair. His religion was Church of England. He also had poor teeth and flat feet, but not enough to reject him from service.

According to his Service papers William married Lily Dunkerly on 14th August 1915 and they lived at 107 Oxford Street, Regent Road, Salford. After his death she was awarded a pension of 13/9d (68p) per week. They had no children.

Military Service: William enlisted at Chester on 26th November 1906. His terms of service were 7 + 5 (i.e. 7 years active service + 5 years reserve). He was posted to Londonderry on 25th March 1907 and spent the rest of his time there, before being transferred to the Army Reserve list on 25th November 1913.

On 15 March 1909 he qualified as a ‘cold shoer‘. The 1911 Census (RG 14/6182) indicates his transfer to Longmoor Camp, East Liss, Hampshire, presumably for ‘shoeing smith‘ training where he is recorded along with trainees from other Regiments. He became a full ‘shoeing smith‘ on 27th January 1912. His record states he was classed as ‘very good and efficient‘.

His time as a regular soldier was not without some difficulties. Between 18th March 1906 and 12th June 1913 he was charged nine times, alternating between absences and drunkenness, resulting in a series of fines, CB and periods of detention. His tenth offence on 12 August 1913 was “urinating in his coir bedding“, for which he was made repay the cost of the bedding and given 8 days CB (Confined to Barracks).

When leaving the Army his conduct was said to be “fair” except that he had been “drunk in charge of horses“, but when he applied for a job with the Great Western Railway in January 1914 his application was not “recommended owing to character”

As a Reservist he was recalled to the 1st Battalion at the outbreak of War and was appointed ‘Regimental Pioneer‘ on 6th August. Just 19 days later, however, he was demoted to Private by the O.C. for misconduct.

His Medal Card shows he entered France on 16th August 1914 and he would have fought with the 1st Battalion at Audregnies, where he fought on the left of the line under Captain Dugmore, La Bassée and 1st Ypres in 1914. On 11th August 1915 he was promoted again, to Corporal, but only lasted two weeks, being demoted again for “overstaying his special pass to England“. (He should have returned by midnight on 16th August but failed to return until 09.30 on 17th.) There was perhaps some justification for this as he married Lily in Salford on the 14th!

Whilst in France on active service he was granted two fortnight leaves in England, in November 1916 and November 1917. In December 1917 he was posted to Italy with the Battalion, where he stayed until April 1918. Whilst stationed at Genoa he received a kick to the back of the head by a mule (4 January 1918). The mule broke away, knocked William to the ground and “jumped on him“. He was treated for deep lacerations at Camp Arguata Hospital and returned to duty on 18th February. This hospital was part of the 51st Stationary Hospital, which was in 3 Sections. Two were opened in Genoa and the third (B Section) opened in Arquata – in a disused wine factory

On 3rd July William was wounded in action and died on the 9th at the 39th Stationery Hospital, Aire. In all he had served 11 years 121 days with the Colours. However, although the 1st Battalion suffered losses at this time (e.g. 5 killed and 13 wounded on 2nd July), on that day it was in the line at Villorba, near Treviso, Italy. It is not known with which Battalion William was serving at the time.