Officers, N.C.O.s & Men of the 1st Battalion, Commemorated on the Loos Memorial 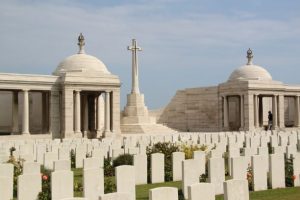 The Loos Memorial forms the sides and back of Dud Corner Cemetery which stands almost on the site of a German strong point, the Lens Road Redoubt, captured by the 15th (Scottish) Division on the first day of the Battle of Loos.

The name “Dud Corner” is believed to be due to the large number of unexploded enemy shells found there after the Armistice.

The Loos Memorial commemorates 20,642 officers and men who have no known grave, who fell in the area from the River Lys to the old southern boundary of the First Army, east and west of Grenay.

On either side of the cemetery is a wall 15 feet [4.6 m.] high, to which are fixed tablets on which are carved the names of those commemorated.

The Loos Memorial names 223 names of the Cheshire Regiment, but just 1 ‘Old Contemptible’ , not from the original 1st Battalion, but an Officer who arrived from the 3rd (Reserve) Battalion with reinforcements on 16th September 1914:

Personal: Frank was born in the September quarter 1864 in Rudry, Glamorgan, Wales. He was the son of John Lewis, a wine merchant, and Emma Frances (née West) Lloyd. He had an older sister, Jessie Mary, and 7 younger siblings, Nellie, May, Walter Edwin, John Church (died as a baby), Theodora (Dora), Carolline Mabel (died aged 6 in 1880) and Donald de Frates.

The 1871 Census (RG 10/5343) shows the family living at 22 High Street, St Woollos, Newport, Wales, although Frank and his mother were enumerated at Portswood Road, South Stoneham, Hampshire, visiting the Harper family (RG 10/1193). Ten years later they were back at the Newport address.

By 1891 the family had moved to Sampford Arundel, Somerset (Census RG 12/1871) but Frank had moved on and cannot be found on the Census of that year. In 1901 he was serving with his Regiment in South Africa (see below).

By 1908 he was a Captain in the Reserve of Officers at Ventnor in the Isle of Wight, when he married Mabel Godsell of Stratford Lawn, Stroud, at St Laurence Church, Stroud, on 3rd June. The marriage was short lived and he filed for divorce on 28th November 1910 on the grounds of Mabel’s infidelity. The Decree Nisi was granted a year later, becoming Absolute on 3rd May 1912.

In 1911 (Census RG 14/5744) Frank was staying at 4 The Square, High Street, Shanklin, Isle of Wight, the home of the Joliffe family. His ‘status’ was “Gentleman, Living on Private Means“. Frank married for a second time at The Strand in London in the March quarter 1913. His second wife was Dorothy Marguerite Florence Lind (photo left). 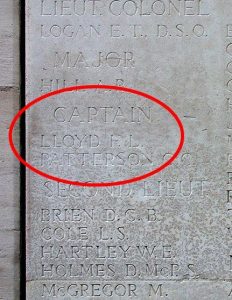 Capt. Lloyd’s name on the Memorial

Military Service: Frank Lloyd’s rise through the ranks was swift, even for the time which initially covered his service in the Boer War, as recorded in the London Gazette:

Captain Lloyd was wounded during the attack on Violaines on 17th October 1914. The War Diary gives a full account of the action: “FESTUBERT – RUE DU MARAIS – VIOLAINES – 12.30 a.m. ‘A’ Company returned to billets in RUE DU MARAIS 12.30 a.m.  3 platoons of ‘C’ Company under Captain Lloyd advanced along LORGIES ROAD to obtain touch with D.C.L.I. 400 yds down road met strong German Patrol. Enemy opened fire which was returned. Captain Lloyd with his men turned German patrol out of their trenches.

1.30 a.m. One Company (‘A’ Company) sent out in support to ‘C’ Company but could not obtain communication with them. Captain Lloyd (wounded) with 3 wounded men returned about 6 a.m. made an attack with D.C.L.I. in direction of VIOLAINES twice, but were repulsed on each occasion. Held RUE DY MARAIS for remainder of the day.

He must have been invalided home for treatment and returned to the Battalion on 24 December, with 4 fellow Officers and 444 NCOs and men from England.

On the 3rd October 1915, during the Battle of Loos, the Germans launched a full-scale attack along the length of 84 Brigade Line, but were repulsed. Major Edwin Roddy (see Footnote below) led a counterattack, the men having fixed their bayonets. They were swept back. Brigade HQ ordered fresh attacks, but the men had now gone beyond the point of endurance.

Later in the day of the 3rd October the enemy swung an attack on the left of 84 Brigade, drove through the Welch and came at the 2nd Battalion. The War Diary says that: ‘The enemy broke through part of the trench occupied by the Welch on our left flank and advanced with great rapidity, throwing hundreds of bombs, their bombers being supported by machine guns and rifle men. The attack came as a complete surprise’. The 2nd gave ground grimly and fiercely.

Despite the obvious record of the date of Frank’s death, for some reason the CWGC entry states: “Died Between 01 October 1915 and 04 October 1915“. CWGC Records show that Frank is one of 142 Officers and men of the 2nd Battalion, killed in action on 3rd October 1915 and who have no known grave. All are commemorated on The Loos Memorial.

Major Edwin Louis Roddy was the son of Col. Patrick and Margaret Roody. Patrick was awarded the Victoria Cross in 1858 whilst an Ensign following an action during the Indian Mutiny.

Their son James Morris Roddy (1st Bn. Northamptonshire Regt) had been killed on the North-west Frontier in India on 9th November 1897. Their youngest son Major Edwin Louis Roddy (1874-1919) was gassed while serving in France towards the end of WW1 and subsequently died on 3rd June 1919 at Nettley Hospital Hampshire. Edwin was married to  Josephine Morgan Roddy (formerly Pressey), their son, Squadron Leader George Michael Roddy (1915-1943), was killed on active service in Khartoum.