Officers, N.C.O.s and Men of the 1st Battalion, Buried in Wimereux Communal Cemetery 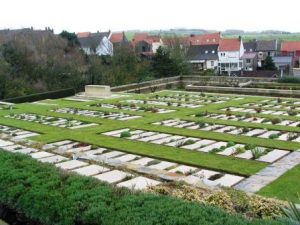 From October 1914 onwards, Boulogne and Wimereux formed an important hospital centre and Wimereux was the headquarters of the Queen Mary’s Army Auxiliary Corps.

Until June 1918, the medical units at Wimereux used the communal cemetery for burials. The Cemetery contains 3 named soldiers of the original 1st Battalion, Cheshire Regiment. 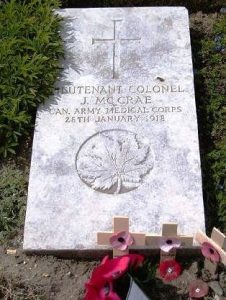 This cemetery also contains the body of Lt.-Col John McCrae, who wrote the poem “In Flanders Field“.

The three Cheshire men buried here, all in late October / early November 1914, probably from wounds received in the 1st Battalion’s action at Violaines and Festubert between 15th – 22nd October. Use the links below to read a little more about each man of the original 1st Battalion, Cheshire Regiment, buried in this Cemetery.

By 1911 he had a younger sister, Elsie, and a younger brother, Bertie. (Census RG 14/21676) John’s mother, Maria Connolly, had died in the December quarter 1905. At the time of the issue of John’s medals Mr Connolly was living at 1 Peter Court, Yorkshire Buildings, Northwich.

At the time of his enlistment John was employed as a Foundry Labourer. When he joined the Cheshires he was 5′ 4″ tall (1.63 m.), weighed 136lbs. (9 st. 10lbs.) had a ‘fair‘ complexion, grey eyes and brown hair. His religion was Church of England. 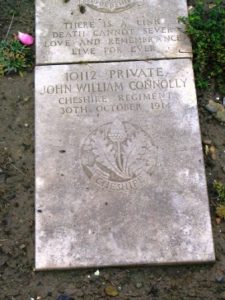 His terms of service were for 7 + 5 years (i.e. 7 years Active Service followed by 5 years on Reserve) and after training he was posted to the 1st Battalion at Londonderry on 14th October 1913.

His time with the Regiment in Londonderry was not without some difficulty, however, caused, it seems by not being the cleanest soldier ever to enlist.

Most serious was on 1st September 1914, after the Battalion had arrived in France. He was charged with, “Absent from Roll Call.” He was sentenced to 5 days C.B.

As a regular soldier John sailed to France with the 1st Battalion at the outbreak of War and his Medal Card shows he entered France 16th August so was one of those who escaped from the action at Audregnies. His ‘C’ Company fought on the right of the line under Captain W.E.L.R. Dugmore.

John died at 6.00 a.m. on 30th October 1914 in No.14 General Hospital, Wimereux, established in the Casino and the Hôtel Splendid (pictured left), during an amputation of his left leg at the thigh caused by a gunshot wound received in action (List 3961).

He was probably one of the 78 NCOs and men from the 1st Battalion wounded between 15th – 22nd October in action at Violaines. In total he had served 1 year 148 days with the Regiment.

Personal: According to the SDGW database Stephen was born in St John’s parish, Stockport, Cheshire, in the March quarter 1894. (Birth Index, NA) The birth records spells his surname ‘Cronan‘.

Stephen is commemorated on the Stockport War Memorial as “S CRONIN“. The 1901 Census (RG 13/3291) shows 7 year old Stephen living at 33 Danebank Stockport, the home of his grandmother, 77 year old Ellen Cronin. At the same address is her daughter, Ann Foley, and her  children, perhaps Stephen’s older siblings, Hannah, aged 16, and Michael, aged 15. [N.B. In 1912 Hannah (Foley) sailed from Queenstown, Ireland, for Boston, Massachusetts, on SS Franconia, with her two children, William (aged 2) and Mary Ellen (aged 1).]

The 1891 Census (RG 12/2800) showed Ann (Collins?) with son Michael (Foley) living at Brierleys Court, Stockport. That Census gives her place of birth as “India – Malta“, whilst the 1901 Census has her birthplace as “Greece“. (Perhaps indicative of a military background.)

In 1911 (Census RG 14/21395) Stephen Cronin (Piecer in a Cotton Mill) was boarding with the Foley household at 33 Mersey Square, Stockport. Despite the head of the house being Ann Foley, and other inhabitants being her son, Michael, his wife, Eugenie, and their baby daughter, Ann, Stephen’s status was given as “Nephew“.

From all of this it is likely that Stephen Croni(a)n was the son of another of his grandmother’s children or grandchildren, who, for some reason, left him in her care by the time of 1901 Census. The 1891 Census (RG 12/2797) shows his grandmother Ellen living with her 16 year old granddaughter, Mary E. Cronan, at 1 Longson’s Court, Stockport.

[The surname ‘Cronan‘ is the official spelling on CWGC and other Military Records.] However, such are the complications in unravelling this family’s relationships, it is really difficult to be sure.

N.B. There is evidence of further confusion in Stephen’s surname, as the Medal Index Card contains two spellings – Cronan and Cronen – to add to Cronin!

To add even more to the confusion ‘The Register of Soldiers’ Effects‘ (using the spelling ‘Cronan‘) shows that his effects were returned to “Cousin and Great Aunt: Michael Foley and Mrs Ann Collins“, this was “on joint receipt in accordance with evident wishes of the dead“. An earlier entry reading’ “Will in favour of Uncle Mr Foley” was crossed through: “validity doubtful“. (The two named as Cousin and Great aunt appear to be the same family that he was living with in 1911 – above.) 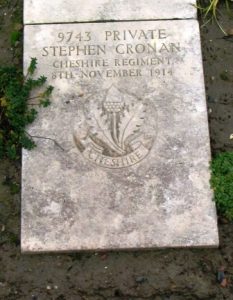 Stephen was enlisted in the 3rd (Reserve) Battalion, Cheshire Regiment, when War was declared, and his Medal Index Card shows he entered France on 11th September 1914. The 3rd Battalion was a training unit, it remained in UK throughout the war, providing drafts for other Battalions. Stephen must have immediately volunteered for overseas service and was probably one of the 21 men to join the Battalion at Le Mesnil on the 24th September, recorded in the Battalion War Diary.

Stephen died on 8th November 1914, in the No.14 General Hospital, Wimereux, established in the Casino and the Hôtel Splendid (see above). He was probably one of the 78 NCOs and men from the 1st Battalion wounded between 15 – 22 October in action at Violaines.

Personal: According to the SDGW database Stephen was born in St Werburgh’s Parish, Chester. The 1901 Census would suggest he was the 4th child of Alice Jones (widow) and born in 1888, in which case he had three older siblings, Elizabeth, Emily and John (1901 Census RG 13/3373), but with such a common name it is impossible to be sure without more information. 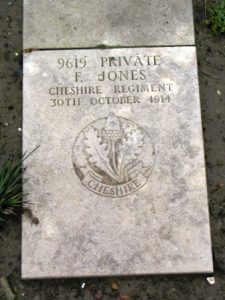 Frederick was enlisted in the 3rd (Reserve) Battalion, Cheshire Regiment, when War was declared, and his Medal Index Card shows he entered France on 31st August 1914.

The 3rd Battalion was a training unit, it remained in UK throughout the war, providing drafts for other Battalions.

Frederick must have immediately volunteered for overseas service. The War Diary states that on the 5th September the Battalion was: “Reinforced by Lt Hartford, 1 Ches Regt and 90 other ranks at 4 p.m.” so it could be that Frederick was one of these.

Frederick died on 30th October 1914, in the No.14 General Hospital, Wimereux, established in the Casino and the Hôtel Splendid (see above). He was probably one of the 78 NCOs and men from the 1st Battalion wounded between 15 – 22 October in action at Violaines.