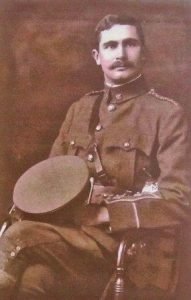 Irving St John (Hugh’s father) became a Captain on 1st May 1867 when he transferred from the 2nd West Indies Regiment, and he resigned his commission not long after his marriage, on 26th July 1883, when the Battalion was stationed on Jersey.

Hugh attended Wellington College, Berkshire (left), from 1896 to 1901 and matriculated at Magdalen College, Oxford, on 14th October 1901, having taken “Responsions” (the first of the three examinations for a degree at Oxford University) in Hilary Term 1901.

He took the First Public Examination in Trinity Term 1902 and for the next two years read for a Pass Degree (Groups B1 [English History], A2 [Greek and Roman History], and B2 [French Language]).

Military Service: After graduation, Hugh was commissioned as Lieutenant in the 4th (Volunteer) Battalion, the Hampshire Regiment, on 14th November 1903, but then joined the 1st (Regular) Battalion of the Cheshire Regiment, his father’s old Regiment.

In September 1909 the Battalion moved from England to Victoria Barracks, Belfast, it then went to Dublin on 9th August 1910, and to Londonderry in January 1913, training and keeping the peace “in aid of the civil power”. On the outbreak of War, when Hartford was a serving officer, the Battalion absorbed officers and men from the 2nd Battalion (which had been stationed in India) and 565 reservists.

Captain Hartford did not travel with the original contingent of the 1st Battalion on 14th August because he was the Officer responsible for looking after Battalion reinforcements when they arrived from England at their overseas base in France. As a result he took no part in the rearguard action at Elouges on the 24th.

(The photograph above shows Hugh, bottom left, with the group of Officers before they departed from Londonderry on 14th August.)

The War Diary records that at Gagny on 5th September: “Reinforced by Lt Hartford, 1 Ches. Regt. and 90 other ranks at 4 p.m” The following day that marked the start of the German retreat north-eastwards. War Diary – “Received news this day of the German General retirement in disorder“. The re-formed Battalion began an advance in order to take part in the Battles of the Marne and the Aisne. 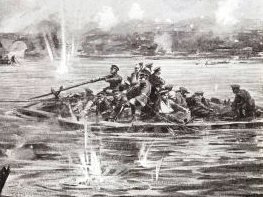 After crossing three disputed rivers – the Grand Morin, the Petit Morin and the Marne – on 14th September, the Battalion traversed the Aisne during a dark night, in heavy rain, using rafts that carried 12-14 men. The following day Hugh was promoted Captain.

During the Battle, the Battalion held the villages of Missy and Ste Marguérite, at the foot of the Chivres Spur (14-16 Sept.), and Le Mesnil Hill (17-25 Sept).

It then marched to St Marguérite (26th September – 1st October), and then, after the Battle, north-west from Droizy (3rd to 7th October) before travelling by bus, train and on foot via Abbeville and Béthune, to the village of Festubert, where it went into the trenches on 12th October.

On 13th October the Battalion suffered 68 casualties while attacking the village of Rue d’Ouvert and then spent two nights in the trenches. On 17th October 248 reinforcements arrived and the Battalion finally captured the village of Violaines, just over a mile WNW of La Bassée, at 18.15 hours, where, for the next five days, it took part in heavy fighting, especially on 20-21 October during failed attempts to capture La Bassée. 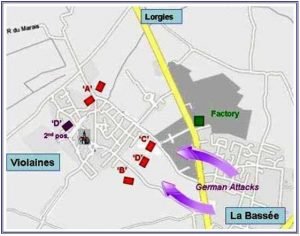 Although the divisional commander wanted to withdraw the exhausted Battalion to a more defensible position, it is reported that its new CO, Captain J.L. Shore (who took over the day before) objected so strongly that it stayed in position to the east of the village.

In the small hours of 22nd October Captain Hartford and his Company were ordered into no-man’s-land to dig a trench nearer the German front line.

This would have been a suicidal task in daylight, but as there was thick fog, the Company piled arms and were digging away, covered by pickets whose duty was to warn of an enemy approach.

The Germans must have heard the digging for they attacked en masse with fixed bayonets at 05.10 hours, forcing the Company to fall back in disorder as they had no time to regain their arms and had to fight with their entrenching shovels. Virtually the whole Company, including all its Officers, among them Hugh, aged 32, were lost, and by the evening of that day the Battalion had lost over a third of its remaining 600 men, killed, wounded or missing.

Its senior surviving officer was Lieutenant T. L. Frost of ‘D’ Company, the only Officer to have landed with the Battalion on 16th August.

Hugh has no known grave and is commemorated on Le Touret Memorial (pictured left).

There is also a plaque to his memory (picture right) inside the Lady Chapel, St James’ Church, Christleton, a village on the outskirts of Chester.

Hugh’s family donated his medals to the Cheshire Military Museum, in the Castle at Cheshire, where they are displayed together with his WW1 Memorial Plaque and Scroll.

He married Mary Catherine (née Hoops) on 10th August 1836 in Co Wexford, Ireland. He was a Justice of the Peace, a Lawyer and a Captain in the 59th Regiment of Foot (now the Cheshire Regiment).

This entry was posted in Le Touret F-N. Bookmark the permalink.