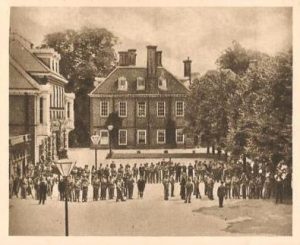 10 years later the family were still based in Ryde, but Dudley was a Boarder at “Marlborough College” (left), Wiltshire.

Dudley cannot be found on the 1891 Census but was probably serving abroad with the Regiment. [Both battalions of the Regiment served in Burma between 1887 and 1891.]

His Service Papers show that over the course of his career Dudley learned to speak French, German and Hindustani. He stood 5 ft. 10 ins. [1.78 m] tall, which was quite tall for the time.

On 14th April 1898 Dudley married Amy Constance Berthon at All Saints’ Church, Ryde, and in 1901 (Census RG 13/4970) the family home was at Park Villas, Llanishen, Glamorgan. His stated occupation was “Captain, Infantry of the Line“, serving on attachment to the Welch Regiment.

Whilst a prisoner of war at Celle Schloss POW camp, at Christmas 1915, Dudley sent a postcard to his son who was by then at Eton College, wishing him a “A nice Christmas and a very Happy New Year“. (Reproduced courtesy of Robert’s son, Dudley’s grandson.) 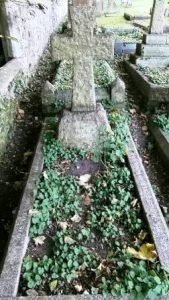 Lt. Col. Boger died on 27th November 1935 at Dial Cottage, Kingsdown, Ringwould, Dover, Kent. He is buried in St. John the Evangelist Churchyard, Kingsdown, Kent. Amy, his wife, who is buried with him, had died on 2nd March 1930. 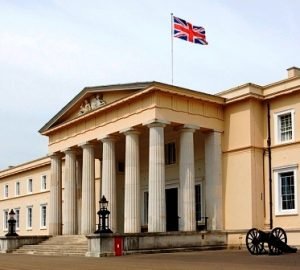 Military Career: After school at Marlborough Dudley went to the Royal Military College, Sandhurst (right), and passed out in 1885 ‘9th in Class‘.

He immediately enlisted in the 1st Battalion, Cheshire Regiment, and was promoted to Lieutenant on 9th May 1885. Dudley was promoted to Captain on 26th September 1894 and to Major on 21st April 1907.

On 29th September 1885 Dudley was posted with his Battalion to India, remaining until 31st October 1887, when it transferred to Burma remaining until 7th February 1889. Both Battalions of the Regiment served in Burma between 1887 and 1891 where Dudley commanded a Mounted Infantry section.

Dudley returned to India on 9th March 1891, remaining until 9th December 1894 and was based at Secunderabad. The 2nd Battalion saw active service in South Africa from 1900 to 1902, during the Second Boer War.  There is no record of Dudley Boger being involved in the 2nd Battalion’s operations. Between February 1898 and June 1903 he was attached as Adjutant to the 3rd (Reserve) Battalion, Welch Regiment.

Dudley was awarded the India General Service Medal with the “Burma 1887-89” Clasp and, as well as his Great War trio, Lieutenant Colonel Boger was later awarded the D.S.O.

On 20th September 1904 the 2nd Battalion left from Government Sidings at Aldershot and began the move to India, sailing from Southampton on the HMS Soudan.  The Battalion was to replace the 1st Battalion which had been in India from 1893 and returned to Lichfield in November 1904.

This period of the History of the 2nd Battalion, although at some time Lt. Col. Boger transferred back to England before the start of the War. (See 1911 Census returns above).

He is pictured centre front in the adjacent photograph with the other Officers of the 1st Battalion.

Colonel Arthur Crookenden wrote the following on Colonel Boger taking command of the 1st in 1914:  ‘The man who was to command at Audregnies’  he writes, ‘took over; Lieut-Colonel D.C. Boger… It must be remembered that in the years before 1939 the Cardwell system required the foreign service battalions to be kept up to full strength by the home service battalions. This meant that the home battalion was little more than a skeleton and spent its time training drafts for the other battalion. Its average strength varied between 560 and 700 and the average draft was 150 a year.

The foreign service battalion was composed, therefore, of fully-trained, fit, fighting men, ready for active service as it stood. The home battalion, on the other hand, while undergoing as severe field training as the foreign, had to rely on reservists to complete its war strength. The first battalion took 565 reservists into its ranks. Officers and men who had recently served in India with the 2nd Bn. knew many of the reservists but on the whole officers and men did not know each other.‘  (Source: “Twenty-Second Footsteps – 1849-1914” Arthur Crookenden, 1956, page: 36)

At 4.00 a.m. on the morning of 14th August 1914 the Battalion, led by a band, marched out of their barracks in Derry and boarded two trains at Great Northern Street Station. The first train left at 5.10 a.m. and the second about half an hour later. 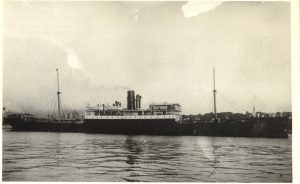 They arrived in Belfast about 10.00 a.m. and marched to the docks and boarded the troopship S.S. Massilia (pictured right).

According to the War Diary the SS Massilia docked in Le Havre on 16th August and the 1st Battalion disembarked at 4.00 p.m. and marched to their rest camp.

Into Action – “The Rearguard Action at Elouges“:

The 15th Brigade, consisting of 1st Norfolk, 1st Bedford, 1st Cheshire, and 1st Dorset, were ordered to prepare a position in rear and in reserve around Dour. But on the morning of the 24th the order came to send them into action to hold up the enemy advance whilst the remainder of 5th Division withdrew.

On arrival at Dour Colonel Boger, along with Colonel Ballard of the 1st Norfolks, were called to meet General Fergusson (left). Being the more senior of the two Colonels, Ballard was placed in command of his own Battalion, plus 1st Cheshires and the 119th Field Battery, Royal Artillery. Colonel Boger was sent back to his Battalion so was not present when the orders were given out.

Both Battalions, 1/Norfolk and 1/Cheshire, marched from Dour to Audregnies and at about 11.00 a.m.

Colonel Ballard began to place his (1st Norfolk) Battalion along a line from 800 yds. (500 m) North of Élouges along a track parallel to the main road between Élouges and Audregnies.

Colonel Boger deployed his Cheshire companies to extend the Norfolk lines westwards for about a mile to the outskirts of Audregnies. There now followed  a confusion of orders.

When General Fergusson had briefed Colonel Ballard he (Fergusson) made it clear that Ballard’s detached force was to act as “flank guard” to allow a general retirement to the south-west. Colonel Boger was not at that briefing … Crookenden (p. 6) describes it as follows: “Had Colonel Ballard mentioned the words “flank guard” to Colonel Boger, the situation would have been plain, but he understood that a copy of the divisional orders for the withdrawal, which as already noted, explained the role of the two Battalions, had been given to Colonel Boger at the same time as he himself had received his own.

The position was, therefore, that Colonel Ballard was under the impression that Colonel Boger had all information available when, in actual fact, the latter still believed that the original orders, to hold on at all costs, held good.”

As a result Dudley Boger gave orders to all Company commanders to hold their ground at all costs. The dispositions were:-

In addition, 3 Companies of 1st Norfolks were to the Cheshires’ right, and 2 Batteries of the Royal Field Artillery to the rear.

The Official War History Map shows the disposition of all troops around the Action on the 24th August 1914.

… how the ‘Battle of Audregnies’ developed over the course the 24th August 1914.

At about 2.30 Colonel Ballard (1st Norfolks) decided to retire and sent his adjutant to tell Colonel Boger to retire also but this officer was killed very soon after he set off. Ballard also dispatched a cycle orderly at the same time as the adjutant with the same order. This man too was killed.

By about 3.45 p.m. Colonel Boger was beginning to see that things were becoming more difficult for his Battalion and activity in front and to his left did not coincide with his understanding of the orders. He sent four orderlies off at regular intervals to find out but not one of them returned. 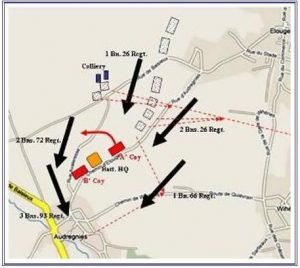 By 6.00 p.m. the Battalion was all but surrounded.

Men and ammunition were both in short supply and by 6.30 p.m. every line of retreat had been closed. Major Chetwynd-Stapleton gave the order to cease fire.

Of the 25 officers and 952 other ranks of the 1st who had been present that morning only 7 officers and 200 other ranks remained and these two latter figures include those on duty elsewhere than Audregnies.

Shortly after giving his men the order to retire towards Bois d’Audregnies, the C.O., Lieutenant-Colonel Dudley Boger was shot in the foot and in the side and lay for over two hours by the side of the Audregnies – Wiheries road.  He crawled over to where Sergeant 9037 Patrick Dowling lay wounded, both legs smashed, where they were later found by a German Officer and carried to a nearby cottage and treated by a doctor. 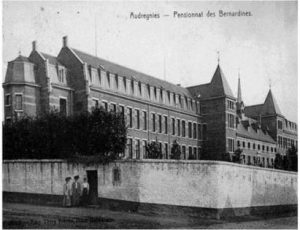 When they were taken prisoner on 24th August, Dudley Boger, along with C.S.M. Frank Meachin, had been taken to a temporary hospital in a convent at Wiheries, Belgium (right).

On the 29th August 1914 Lieutenant-Colonel Boger wrote from the “Croix Rouge” (Red Cross) at Wiheries where he was severely wounded to Lieutenant W. G. R. Elliot, who read out the letter in the Officers’ Mess: (Crookenden, p. 17-18)

But later that same night, when their guards’ backs were turned, the two men had staggered out into the village under cover of darkness and hid in a disused building. They remained in Wiheries for some time, hopping from house to house, until their escape to Brussels was arranged. 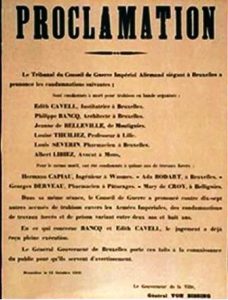 One grey, dismally wet night in November 1914, two British soldiers in disguise were guided through the silent side streets of German-occupied Brussels by a patriotic Belgian civilian. Herman Capiau was an engineer by trade, but since the outbreak of World War I he had played a key role in an escape organization that was sheltering British and French soldiers trapped behind the German lines after the Allied defeat at Mons.

Lt. Col. Boger, who had been shot three times, in the hand, right thigh and foot, had grown a beard in the three months he had been lying low, and was wearing the black hat and floppy tie of a typical Belgian factory worker. His colleague, Company Sgt. Maj. Frank Meachin, also dressed as a labourer, had packed rolls of cloth between his shoulders to turn himself into a hunchback. That, he hoped, would explain to any inquisitive German soldier why such a tall, strongly built man was not serving in the army.

In the care of Nurse Cavell, Colonel Boger had an operation on his foot and later both he and Sgt. Major Meachin got hold of identity cards, although the Colonel still could not walk.

Meachin, disguised as a “fish hawker“, succeeded in reaching Flushing and then on to Folkestone. (He rejoined his Battalion and later returned to France.)

The Colonel was not so fortunate. He got as far as Villevorde when his passport (unofficially obtained!) was seen to be not in order. He was ordered to report to the German Commandant in Brussels and was interned at Ruhleben. 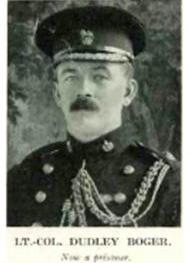 This was followed by: 5th April 1916 Wahmbeek bei Bodenfelde POW camp, reported to be at same camp as Major Chetwynd Stapylton (Source: Oak Tree Magazine, January 1917); then Holzminden POW camp (no date) where Dudley was sent for a medical assessment for possible internment in Switzerland, but rejected. (Photo, right, captioned “Now a Prisoner“)

The photo, left, shows Dudley Boger (in the centre) in one of the camps playing a form of hockey with some of the other prisoners. (Reproduced courtesy of Robert’s son, Dudley’s grandson.)

However, on 29th December 1917 he arrived in Holland as an internee, along with Captains A.J.L. Dyer, W.L.E.R. Dugmore, H.C. Randall, Lieutenants W.G. R. Elliot, G.S. Jacobs, R.H. Bolton, and I. Fairweather, and Major B.H. Chetwynd-Stapylton.

On 13th -14th June 1918 they were ‘At home’ at Sheveningham in Holland, with other Cheshire officers and wives at ‘The Blighty Hut’, including those Officers named above. (Source: Oak Tree magazine) No date has been found for Lt. Col. Boger’s final arrival back in England.